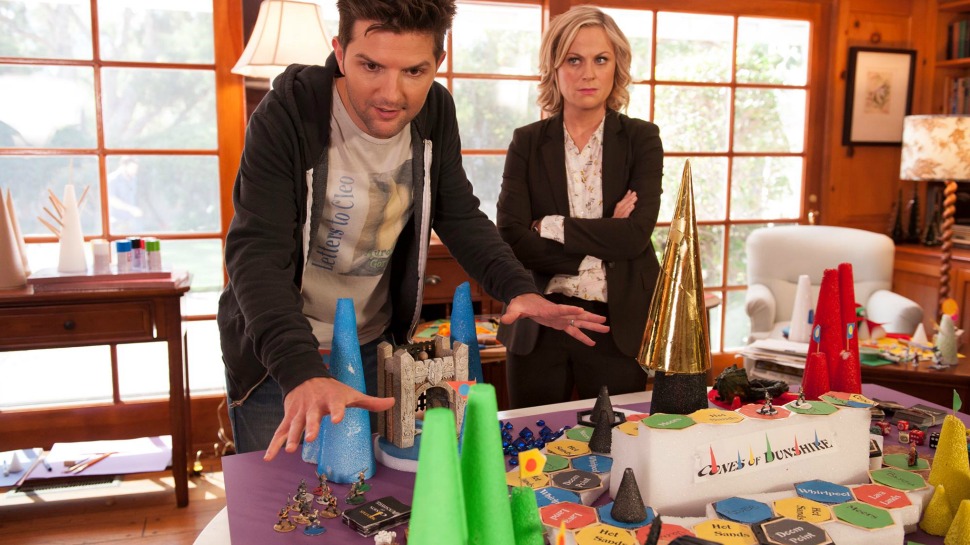 This is one of those weeks where I’ll probably dwell on the show notes as much as the episode because I think there’s a lot of good stuff there.

First, I was there when Steve and Chris got in the argument he mentions. It was a bit of a “perfect storm” situation. You had the ghost of a wizard, which was supposed to have the intelligence it had when it was alive, so Steve decided to use a humanoid understanding of tactics. We were low-level characters, so there wasn’t a lot of spare coin floating around yet to buy a solution. To be fair, I think the writers of the adventure included a ghost touch magic item (scroll, elixir, don’t remember what exactly) in a different room but we hadn’t found it. So you had the magic user popping out of the floor, casting a spell or attacking, and dropping back into the ground. And while we were able to prepare SOME ready actions to attack, it was just slow going we kept having to retreat over and over. And we couldn’t really go do something else because that was the critical path through the adventure. It’s all stuff you can justify, but it absolutely WASN’T fun gaming.

With that as backdrop, I actually agree with Steve that environmental dynamics can be a really interesting way to spice up a game when done right. If you think about it, a lot of these scenarios involve fighting multiple instances of the same (or close to the same) enemy. If we need proof, let’s have a drinking game where we take a sip every time someone says xulgath. Similarly, your characters only get new abilities when they level, so they stay pretty much the same and fight most battles the same way. So… same bad guys, same characters… even the best campaigns can get a little “lather, rinse, repeat” after a while. So that’s when changing the battlefield can be so effective, because it’s the thing you expect to change least of all.

(Let’s also acknowledge that it’s a concept that’s been borrowed from or influenced by MMORPG raid mechanics. Here’s your fight… now, 30 percent of the way through, we’re going to turn the floor to bees, and you have to execute this movement pattern we came up with to avoid getting stung to death.)

HOWEVER. I think it works best when it’s a mixed bag that has good or bad possibilities, or that both the party AND the enemies can make use of the change. If you create an environmental change and then give the bad guy the tools to bypass it entirely (for example: chunks of the floor drop out, but all the enemies have flying), than it’s ONLY a nuisance to the party and that’s just difficulty for the sake of difficulty. If it’s an environmental change that can also be used to the party’s benefit – even if they have to do some brainwork to make it happen – I think that’s where things get interesting.

Skipping ahead a little, that sort of applies here. Yes, the wall Thessekka lays down cuts Ateran off from the rest of the fight, and since they’re the main healer, that’s certainly not nothing. On the other hand, the wall also creates a potential defensive formation for the party as well, as we see when Ateran gets knocked down to their last hit points and can duck down behind it to stay alive. Mixed bag… interesting. One-sided… not interesting (unless it’s to beef up an encounter with a group of weaker foes.)

Now that we’re talking about the fight itself, we start this week with a lucky blow, as Hap’s chain lightning basically wipes the rest of the adds off the board and reduces the fight to Thessekka against the party. I’m not sure how manageable this fight would’ve been if the adds had lingered another round or two. But one good zap and a bunch of crappy saving throws (including the boss herself), and this is back in the realm of possibility.

In the unlucky blow category, we had Darius ALMOST getting knocked over the edge halfway through the fight. I don’t think the fall would’ve killed Darius outright, but if it took him multiple rounds to climb back up, having him not there to take blows and create flanking would’ve made the fight a LOT more hairy. And actually this dovetails nicely with Steve’s earlier point: if Steve was really a “killer GM” and treated the players in an adversarial fashion, he could’ve easily attacked Darius and tried to knock him off; without a second reaction, Darius wouldn’t be able to grab an edge again and would just fall. When Steve talks about not trying to “win D&D”, it’s stuff like that. Yeah you could… but is it something you’d feel good about if it becomes the reason a player leaves the group?

Luckily Darius stays in the fight, gets back up on the platform, and the battle continues. As it does, we see some smart tactics start to emerge, as the party (except for Darius) switches away from raw physical damage and moves to forms of damage that would stand a better chance of bypassing Thessekka’s defenses. In some cases (Hap) it was a 50-50 between a coherent plan and “that’s what spells were left”, but you did also see Alhara try to focus her attacks on generating bleed damage, and you saw Ateran move away from telekinetic projectile and toward to his less physically-oriented spells. Granted, those other spells came with save DCs and Thessekka made most of her saves, but the tactical thought was sound.

And eventually, it all comes together and Thessekka is downed. Once it’s the entire party beating on one bad guy, it’s a short journey to victory lane. So that’s it, right? The Big Bad is vanquished, the towers are clear… oh wait a second. Thessekka left some notes behind. And those notes suggest that she experimented on her troops and created some mutant xulgaths that don’t sound like anything we’ve seen yet. You’d like to believe she wouldn’t create minions more powerful than herself – that’s not accepted best practices in the Evil HR Handbook — but even something close to her power could make for a nasty fight yet to come. (And lest we forget, we haven’t even gotten to some of the other side issues like the dead people with nosebleeds.) So despite the party running a little low on resources, we may not be QUITE done with this book of the AP just yet. Onward!

As always, we’ll pick it up next week with more smelly xulgaths (definitely), more good news and bad news that really just turns out to be bad news (probably), more gratuitous references to Darius’ buttocks (50-50 chance), and the usual hijinks you expect from the Circus of Wayward Wonders. As always, feel free to stop by our Discord channel or other social media and let us know what you think of the show. Thanks for listening and we’ll see you next week.