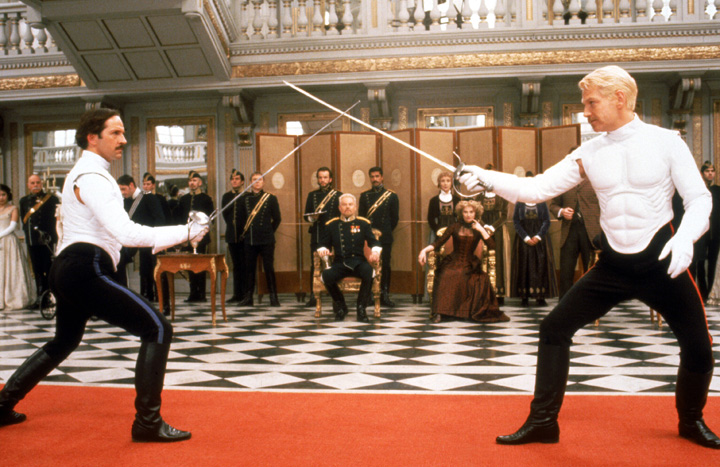 Some of you who read both columns already know this, but early-to-mid April tends to be a mess for me. There’s a fantasy baseball draft where even though I’m not in the league anymore, multiple life-long friends (including Steve) descend on Pittsburgh and hang out for the weekend. There’s also my kids’ birthdays, including the Big 1-8 for The Boy. And of course there’s doing taxes. Or more accurately, procrastinating about doing my taxes. So sorry I’m running a bit behind this week.

I thought the discussion in the show notes about gold vs. magical items was kind of interesting, and since it involves a direct comparison between the two shows, it felt like I couldn’t stay on the sidelines. It is absolutely true we Edgewatch types almost always have more cash-in-hand than the circus-folk (though at the risk of a mild spoiler, there was a recent shopping spree where Basil ended up with ONE gold piece left). As Steve said, he converts a good amount of the treasure directly to “bounties” or “rewards” and just hands us cash because the moral ambiguity of cops shaking people down for their treasure directly would send a really weird message.

Having said that, I still think actual treasure has a place in this game, and here’s why. Loot can be a driver of character change in a way gold cannot. There’s that phenomenon of “you didn’t know something was missing until you found it” that’s very much at play, and it can actually cause you to take your characters in new directions because of the toys you get along the way. Look at Basil and his bow: archery wasn’t even on the radar when I initially built Basil, but once I was gifted a bow (a NAMED bow, no less) by the loot gods, I HAD to start playing around with it. Now, it’s pretty fundamental to how I play. Closer to home, Riley isn’t “loot”, but being able to rescue and adopt an animal companion created a major change in Loren’s concept of what Hap was going to be (though the love of animals was always there), and it’s been fun to watch that unfold. Even the water-based Aroden boon drove a conversation about how committed Hap was to her fire magic. I think you risk losing that spontaneity if you just convert everything to an Amazon gift card, even if it’s much easier to administer.

And sure, it sucks when you sometimes get a really cool piece of loot that absolutely NO ONE in the party can use, but I think the good outweighs the bad of keeping at least SOME real loot in the mix. Besides, in my case, missing out on cool loot just drives the NEXT character I create: I can neither confirm nor deny I once decided to roll a reach-weapon fighter solely based on my current character’s party getting a fancy magic halberd no one could use.

Now, all of this discussion of loot feeds into our discussion of “prison wallets” and cloacas, and… yeah, I’m not going anywhere near that. My first thought is that this is actually a guerilla marketing campaign for the Battlezoo monster parts system: “if we make conventional looting disgusting enough, perhaps players will choose something else!” I will say Rob P.’s “prayer beads” comment was the star of the show. First, I don’t think I’ve ever heard Vanessa laugh so hard she was out of breath before, but she was pretty close here. Second, if we ever launch a more mature line of T-shirts (RFNC-17?), “those look like prayer beads… ohhh!” will undoubtedly have to be the first one off the line.

At any rate… back to the action. We rejoin our team as the previous battle winds down. There’s healing to do and a little bit of waiting until the fires die down, but it’s now time to storm the tower itself. The sequence does create a bit of incongruity where the alarm has been raised, but nobody comes to check on the xulgaths at the guard post for 20… 30… 40 minutes? One can imagine the xulgaths inside:

“Boy, looks like something’s going on out there. Should we check it out?”

“Don’t worry, I’m sure if they need us they’ll come get us.”

And then the return to… banging rocks together, or whatever it is that xulgaths do when they’re just waiting for adventurers to arrive.

So the party gets ready, Alhara steals up to the main chamber, and it’s time for another fight. At first glance, it’s shaping up as another fairly easy battle. The xulgaths do have numbers, but they don’t seem to be able to hit all that well or do that much damage in the first round.

But then things get a little more interesting in the second round, as the battle starts to split into two major fronts. Darius and Alhara are doing fine against the ones they’re fighting, but a group breaks off and attacks Ateran and Hap, and “xulgaths plus squishy casters plus better dice luck” puts the casters on the defensive a bit.

But that’s not even the worst of it. Thessekka, the big boss of the third book, makes her dramatic entrance. (From behind a curtain, no less. Who knew xulgaths loved theater so much?) She’s much bigger than the average xulgath, visibly stony (stoneskin or something like it) and has extra pointy bits sticking out of her body. And the parts that don’t have pointy bits are covered with all sorts of alchemical flasks. So this was probably to be expected, but the little guys were just appetizers and the main course has been served.

(As an aside, I find myself wondering if one could attack the alchemical items on her body, forcibly detonating them and causing her damage. But to counter my own argument, I feel like the fact that she has Quick Bomber means the materials are safely stored and can’t be targeted. Besides, if you could do that to enemies, then the GM could do that to you, and nobody would ever play an alchemist again.)

The Varus siblings charge up to deal with Thessekka, with mixed results. Alhara gets one of her patented trips in, but she’s not strong enough to shove the xulgath over the edge, and Darius misses entirely. Meanwhile, the one attack that lands hints at some pretty strong damage reduction. Whether that’s a spell-like/alchemical ability, or a native damage resistance is TBD.

Meanwhile, the results are equally mixed down in Caster-Town. The good news about Darius and Alhara moving forward to take on the boss is that Ateran and Hap can start using area damage, and Riley jumps out of his Pokeball to create some flanking possibilities. Unfortunately, the bad dice luck is still hanging around, as the xulgaths make most of their saves on the area damage (and in Hap’s case, the damage from her fireball was underwhelming to begin with). And Thessekka used her first around of alchemical attacks to put some acid damage on the back line, so there’s that too.

Now… you might be thinking. “All of that sounds impressive, but what if the boss also had a devastating area attack too?” If that was your thought… congratulations, you can become a Paizo adventure path writer, because Thessekka’s next move is a little thing called Earthen Torrent. It’s a cone effect that does 10d10 of damage, so Darius and Alhara also have to deal with a mini-avalanche right out of the gate.

And that’s where we’ll pick things up next time. On one hand, you expect the final fight of a book to be pretty tough. On the other hand, I’m looking at the stat block for this Thessekka and… I’ll admit I’m a little worried. She’s looking like a pretty tough customer, and half the party is still dealing with the adds.

Will they make it through? Will we be seeing a party wipe, followed by a circus B-team of Evora (and Gigi), Matchstick Flynn, the Aquamancer, and Booralu tackle Book 4? Guess you’ll have to come back next week and find out. As always, feel free to drop by our Discord channel or other social media and let us know what you think of the show. Thanks for listening and we’ll see you next week.