The Bird’s Eye View S1|15: The Afterlife Of The Party - Roll For Combat 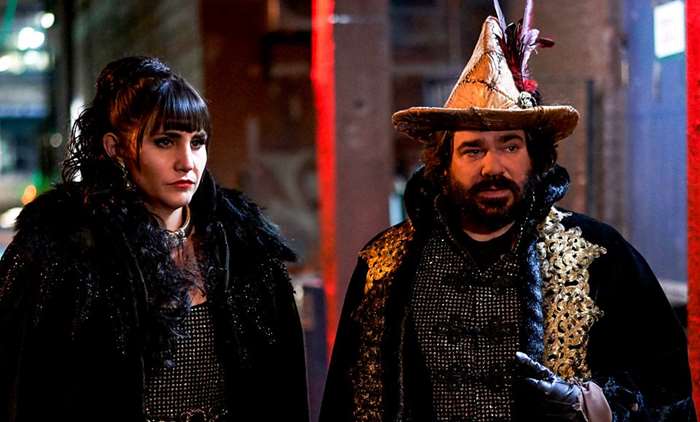 Jason recaps the events from Agents of Edgewatch S1|15: Smoke ‘Em If You Got ’Em.

Welcome to the last Bird’s Eye View of 2020. Finally. (I hope we’re on the same page that I’m talking about the year and not my writing.)

I’m not going to get too far into Steve’s ongoing kerfuffle, and I sure as hell don’t want to kick off Edition Wars #3894. Though if you’ll indulge in one moment of snark, if your complaint about 2E is that you “do the same thing all the time,” feel free to Google “5E warlock memes” and get back to me. ELDRITCH BLAST! Having said that, I will offer a little player perspective on what I’ve noticed about Second Edition after having mucked about with it basically since release.

First, the meta-level. Maybe it’s just that I look at this activity differently. At a meta-level, this whole discussion comes at it from the standpoint of a “game” to be won or lost. At least within my adult life playing with friends, I have always looked at it as more of an exercise in collaborative storytelling. The game rules just happen to give it a little shape and maybe to prevent one player from dominating the action. And yes, the GM holds a little more power since they represent The Story and they arbitrate the rules, but at some level… if the rules are getting in the way of the story, that’s a conversation you need to have with your GM.

Don’t get me wrong, rules have their place. I’ve been at tables where the game ran on the rails of the GM’s whim to the point where the rules were arbitrary. You CAN go too far in the other direction. But when in doubt, put the story first and the dice-throwing second, and you’ll usually come up with the right answer.

I ABSOLUTELY echo Steve’s comments about party tactics playing a more vibrant role in Second Edition. The use of abilities is one part of it, but the one thing I didn’t see Steve mention is that this system favors movement and hit-and-run tactics. A lot of the older systems, including First Edition Pathfinder, were pretty “tank-and-spank”: your armored guys clogged up the front line, absorbed shots, and hit anything that tried to get by them with attacks of opportunity. Meanwhile, your squishies sat in the back and either healed or burned down enemies with direct damage. With attacks of opportunity being much less common and enemies commonly having a significant advantage in attack bonuses, it’s a real paradigm shift. Enemy third attacks are as viable as your second attack, so standing toe-to-toe trading three shots per round is a losing proposition, no matter how good your armor is. This was a hard-learned lesson playing the ostensibly tanky Champion class in our Plaguestone game. Marched out to meet a group of killer shrubs because that’s what the tank is supposed to do; got beat down in one round.

Similarly, with crits being easier to achieve, it’s quite often less about how you can squeeze out another die of damage and more about how you can make crits happen on offense or prevent them on defense, which has placed a new premium on status effects. One or two more dice of damage may make you feel good at the moment it hits, but giving a creature a -2 or taking away one of its actions every turn by slowing it… those are the things that win fights.

Part of what drove this lesson home for me was having Basil dip in the wizard archetype. With the wizard archetype, you get ONE spell slot per level at first (though there’s a feat to get a second slot at higher levels). And don’t get me wrong… that’s kinda frustrating. But a side effect of that is that it’s almost completely changed my thinking about how to pick Basil’s spells. If I get ONE spell, am I going to use that on ONE direct damage strike that basically gambles my entire casting reservoir on one roll of the die? Or am I going to use that on something that has a one-minute duration and can potentially impact the next 10 rounds of the fight?

Like I said, I’m not going to deep dive as much as Steve did, but those were a few thoughts that have occurred to me over the year-plus we’ve been playing 2E.

On with this week’s show… and we FINALLY make it to the party. And it’s a themed party, where the different rooms of the party are themed based on the alignment-based planes.

Now… I have to admit, I got a little flustered early on. I had concocted an entire cover based on my backstory… Basil studies law and his mom is a judge, so I thought of using a known shady lawyer who could’ve invited me so I’d have a reason to be there. I was loaded for bear, from a roleplaying standpoint. But I never really came up with a plan for the hostess, just flat-out not believing me. So that was kinda awkward.

(And OK, if the hostess wasn’t going to believe me anyway, might as well have used a fake name. On the one hand, I hope that won’t come back to bite us later; on the other, if one thinks about one’s own real-life experience with parties, do YOU take down every name you hear just in case it becomes relevant later?)

Early on, the “system” behind the party becomes apparent. Each room has a theme, a challenge (usually skill-based), and an NPC of some importance. You PROBABLY (but maybe not always) have to do the challenge to get the NPC interested in talking to you. And the description of the guards strongly suggests this shouldn’t end in combat – both for better (that wasn’t the author of the AP’s intent) and for worse (if we screw this up badly enough that it reaches combat, we WILL lose badly).

One thing I idly wonder about is the initial judging. Is there a method to the madness? Are the initial challenges assigned randomly? Could it be based on alignment? Does Steve pick them based on what would fit our skills or make for good storytelling? It did seem – whether pre-ordained or luck of the draw – that most of us got challenges that aligned reasonably well with our abilities. Gomez gets a riddle, Dougie a wrestling match… heck, even though I got chomped by the griffin, my problem was more the low rolls than that the challenge tested the wrong skills.

But I love the concept… an afterlife themed party with different rooms representing the different planes? It’s just so cool. Too bad the guest list is all thugs and gangsters.

The one other thing that stuck out about this episode was Dougie’s almost complete lack of guile while on this mission. I’m still trying to figure out what Dougie’s “deal” is, from a roleplaying standpoint. Is he Forrest Gump, but a cop? Is he Clark Kent, hiding a much more savvy form beneath a cloddish exterior? All I know is I half expected him to just come out and admit to the assassin that he was a cop, so… kudos to John for some solid roleplay there.

As we do our initial information-gathering, we don’t learn a lot (yet… still plenty more rooms), but there are a few interesting nuggets. First, there’s the hint about “people wanting to leave their old lives behind”. That may or may not apply to the stonemasons, but that fits the menagerie owner and the veterinarian who are having an affair to a T. Also… the ochre jelly. I know the cover story is “garbage disposal” but that IMMEDIATELY sounds like a way to dispose of bodies. And I feel like we’re going to be fighting it at some future point, as soon as we figure out who bought it and where it currently lives. But if you’re looking for “Colonel Mustard, in the study, with the lead pipe” levels of clarity… we’re not there yet.

As this is the last column of the year, I just wanted to give a special thanks for listening to our show this year. One thing 2020 has done is made me more philosophical about things. It’s been such a rough year for so many, and we all search for little moments of normalcy however we can get them. If Roll For Combat has provided a little bit of that for you… I’m truly touched that we can do our small part to make a weird year a little more pleasant around the edges.

As always, feel free to drop by our Discord channel or other social media and let us know what you think of the show. Thanks for listening, and we’ll see you both next week AND next year.