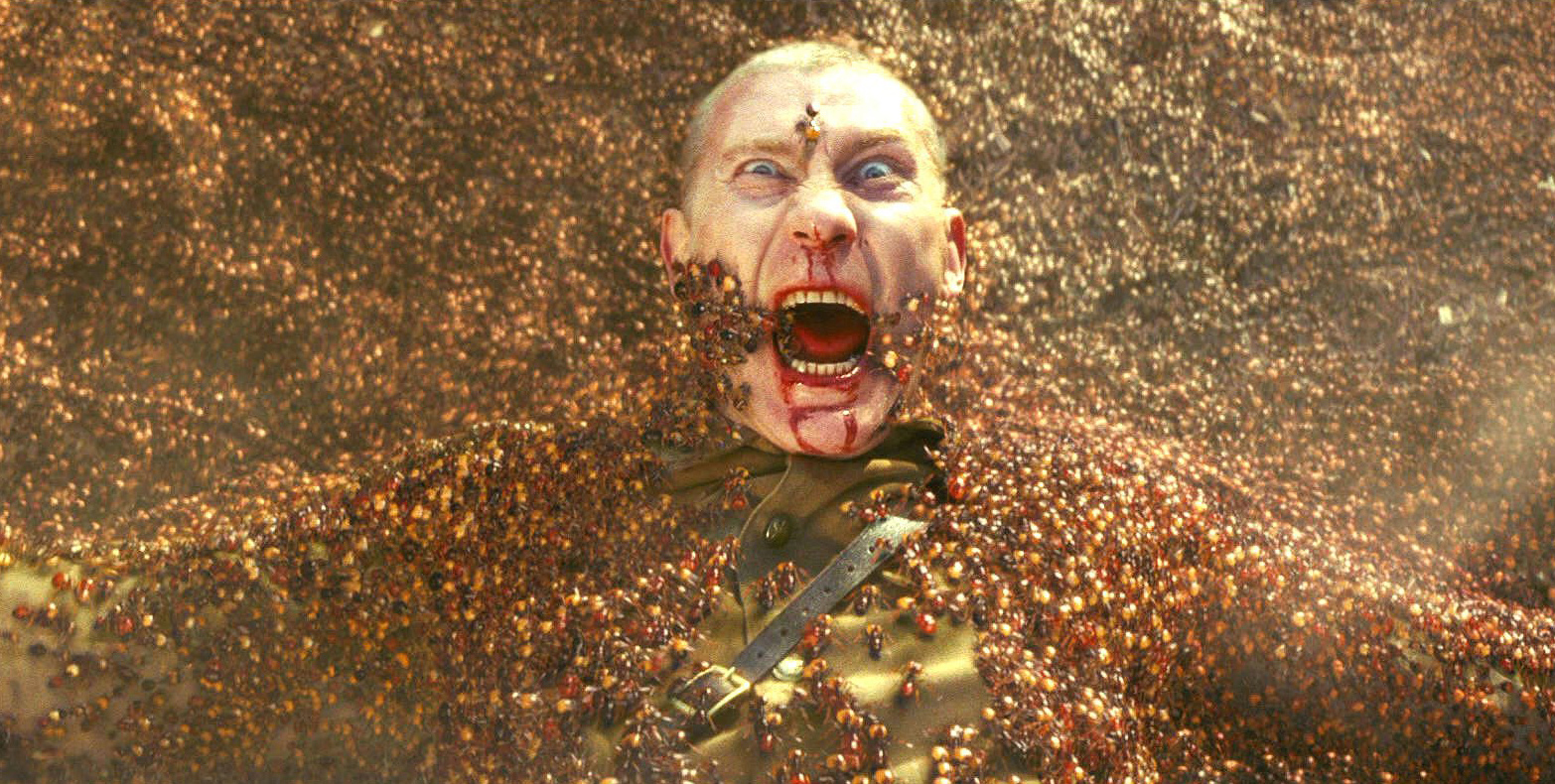 Jason recaps the events from Agents of Edgewatch S2|26: Do You Want Ants? Because That’s How You Get Ants

Well… that was inevitable. We managed to pull half the dungeon down on our heads.

Not that this is new territory for us. We’ve got a bit of a nasty habit of opening one more door, or “retreating” into a new room while an existing fight was going on. But a lot of that was directly attributable to Mister Peepers’ lack of impulse control, and we were trying to be on our best behavior this time… I swear.

Now, if you have access to our Discord channel, this is a lot easier to follow: the map is posted to the “edgewatch-images” channel. After we start the episode screwing around with the iron maiden (EXCELLENT!) and looting, we move from the “Torture Chamber” to the “Bloodletting Hall”.

If this were a mall, the Bloodletting Hall would be the food court – it’s at the center of everything. It’s got doors and passages breaking off in almost EVERY direction. If you don’t have Discord, let’s treat the map as a clock face – we came in at 4 o’clock, and there are exits at 6 (Armory), 7:30 (Hangout), 9 (Sleeping Area), 11 (Screaming Cell), 12 (doesn’t DIRECTLY connect to anything goes to another T passage), and 1:30 (Processing). Worse, many of those exits are just open passages – a few are blocked by doors, but the majority offer free access to the next room.

So the long and short of it is that this was ALWAYS a situation ripe for bleeding encounters. We just arguably pushed it over the edge by getting a little greedy.

I don’t want it to get lost in the shuffle how CREEPY this place is turning out to be. We kinda ho-hummed a corridor full of body parts earlier, but here we’ve got a room where victims are literally drained of their blood which is flowing into a pool below. It’s official – I think we’ve finally passed the Murder Hotel for the horror factor.

After exploring the room, we had to decide which direction to proceed in next, and this is a bit of good news/bad news thing. We could hear noises coming from the “Hangout”, but it’s also one of the most open-ended rooms. If you look at something like the Sleeping Area, it’s a single room. But the “Hangout” continues on into the distance – out of visual distance even for the people with darkvision – and eventually meets up with the front porch area where the golem and the ceustodaemons are.

Can’t imagine why I’d be mentioning that little factoid.

So the “safe” move probably would’ve been to tackle the smaller, finite rooms first before going toward the big sprawling area. Pick off the close-ended fights first, MAYBE even retreat and rest depending on how those go. But I think we got a little too enamored with the idea of getting the drop on a large number of guys with area attacks, so instead of playing it by the book, we decide to chuck a couple of fireballs down the hall to get the fight off to a good start. Though because of the lighting and fog of war, we don’t REALLY know what’s down there. Hey, as long as it’s flammable… am I right?

And that’s the beginning of all hell breaking loose. And look… spoiler alert… this is NOT going to be a single-episode fight. It may not even be done in two.

At first, this doesn’t really look too bad for us. The minions are minions. These ones are a little more hardy than usual and have a few extra hit points, but at least they’re not sewing pieces of cloth to us. Shouldn’t be too tough. Now, the Skinstiches SHOULD be similar to the one we fought at the bank, and that wasn’t that tough of a fight either. Especially since we already know they’re vulnerable to fire.

But then things get interesting. First, THESE Skinstitches have been enhanced with special Pinata Powers. That’s right… when you kill these guys, they bust open and become a swarm of ants. Ants that apply a bleed effect to you that lingers even after you’ve left the square.

As an aside, my general frustration with swarms is they have a lot of the advantages of oozes (immunity to all sorts of “extra” damage, take up extra space, etc.) but their “swarminess” is represented by a decent armor class, so they’re still hard to hit and put damage on. At least with an ooze, every attack hits and it’s just a sprint to kill it before it kills you. Having said all that, swarms still aren’t as bad as in First Edition, where if you didn’t have AoE you were REALLY screwed, but they’re still pretty unpleasant.

Where things REALLY go sideways is that at least one of the cultists DOESN’T just charge mindlessly to his doom, but hangs back out of combat range and sounds an alarm. So who KNOWS what’s going to happen with that? One would assume they wouldn’t have installed an alarm that no one else in the complex can hear, and we can’t possibly have gotten so lucky that it ONLY goes to the rooms we already cleared. Cliff’s Notes: assume we’re on the clock for more guys showing up.

So I think we can assume this is going to get worse before it gets better. And at the tail end of the episode, it does EXACTLY that, as the first batch of reinforcements arrives. Still just grunts, but we’re in the thick of it now. The good news is we haven’t used a lot of resources, and there’s still no ONE enemy that poses a serious threat. But of course, with all those guys, it doesn’t take more than a crit or two and we’re on our heels. And even that assumes those reinforcements are the end of it. Not sure what happens if there’s more beyond that.

Oh, who am I kidding… of COURSE there’s more beyond that. But we’ll get into all of that next week. As always, feel free to drop by our Discord channel or other social media and let us know what you think of the show (and hey, you can check out the map). Thanks for listening and we’ll see you next week.