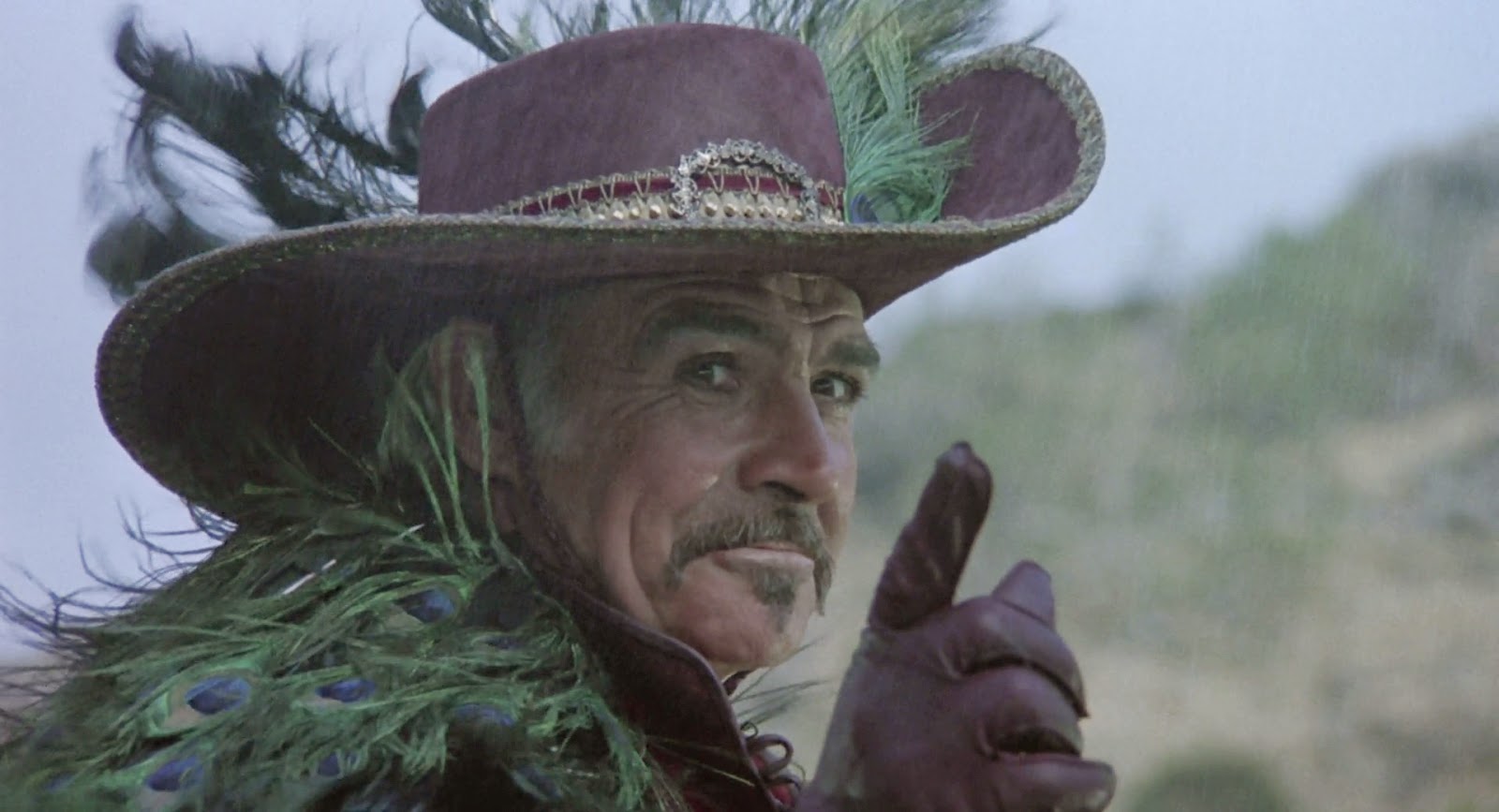 As requested by the Pop Culture Desk of Roll For Combat, we start this week’s Talking Combat with a brief virtual moment of silence for the passing of Sean Connery. Yeah, he’d stopped making movies a while ago, but he was a big part of our collective upbringings. The iconic James Bond… Indiana Jones’ dad… Captain Raimius… possibly even “Ramirez” from Highlander if you want to go with a deep cut. I probably won’t follow through, but when I first heard the news, I threatened to record this week’s show entirely in my Sean Connery accent as a tribute.

First things first, we had a good chuckle in group chat about the “podcast wars” comment. Steve, ever the provocateur, pulled the sound-byte while editing this episode and shared it with a combined chat group that included both teams. Shit was talked back and forth, good times were had by all. Me, I’m sticking by my idea that this would be fertile material for PaizoCon next year.

This week’s show is a little weird insofar as we leveled up, but we didn’t really talk about our changes. Usually, when we level, we send it around the horn and each person talks about what they took (except for Bob in the Dead Suns days, who liked to be all secretive about that stuff for roleplaying reasons). This time, we kind of just jumped right into the action. I don’t remember why – maybe we got a late start or the episode broke in a weird place. (I even kinda remember having such a conversation, but either it took place before Steve started recording, or maybe it’s in a later episode.)

So the big news of Level 2 is that I decided to have Basil do a multi-class dip into wizard. I pretty much knew I wanted to mix some magic into my build to make Basil a little more dynamic, but I considered going a couple of different directions to get there. One choice was a multi-class dip into alchemist, but that felt a little like I would be invalidating my Level 1 build: if I wanted an alchemist investigator, I should’ve just gone with the Alchemist build and taken That’s Odd as my Level 1 feat instead of the one that finds traps. I also thought about the Scroll Trickster archetype from the Advanced Player Guide – basically, that archetype lets you duct-tape together fragments of scrolls to make temporary scrolls at each long rest, and you also get Trick Magic Item with an added +2 bonus for scrolls. But I think it was Level 6 before you got even ONE Level 1 spell; in the meantime, ALL you got was Trick Magic Item, which I can get in other ways. Though I will admit Scroll Trickster is WONDERFUL on the roleplay flavor front, and it’s also neat that you can choose ANY spell of the appropriate level from the Core Rulebook at the time you make the scroll, as long as you’re trained in the right skill (and Basil has all four now). I looked at the witch for like, five seconds, but I didn’t want to be too duplicative of Ateran from the other show, and on a roleplay level, the flavor didn’t feel like it fit: I didn’t see an upper-crusty kid like Basil forging pacts with mysterious forces, and a familiar showing up out of nowhere would’ve been weird.

So I settled on wizard. In the immediate short term, there’s combat survivability. Just adding a few cantrips gives me a +1 bump to armor class as a single action and damage mitigation (shield) and another ranged damage source (ray of frost) for creatures that might be immune to my ancestral electrical ability. Also, I can swap in light if we’re doing anything more explicitly dungeon-delvish. The spell slots on a multi-class wizard aren’t great – one slot per level, though I think there’s a feat you can take in the mid-teens to get a second slot at each level – but I like the wizard’s big-picture flexibility of being able to add spells to your spellbook by transcribing them. In a game where we seem to be getting a lot of money and stores are everywhere, I feel like there will be a lot of chances to tweak my spell arsenal as we go. I also feel like it gives me roleplay flexibility as the game progresses: sure, a bunch of combat spells are probably the path of least resistance, but I have the option to choose some spells which will magically augment my core investigation skills. Comprehend languages? Knock?

So… wizard it is! If you care, I also took Nature as my skill, so now I’m trained in all four caster skills, and I took the Ward Medic feat, which lets me use Treat Wounds on two people at the same time. Still no Battle Medicine, so I’m still useless as a mid-fight healer. Leave that to Gomez and consumables, I guess.

Of course, tying this back into game action… in my excitement to unveil my new-found wizard abilities in dramatic fashion, I made a bit of a tactical mistake and forgot to call out the traps I saw when I entered the room with the kobolds. Oops. Which came back to bite us when Dougie went charging in and stepped on not one, but two, traps. Followed by an appearance of Mildly Pouty John, complaining about how he doesn’t get any help and we can just fight without him.

I’m willing to split responsibility for this down the middle. John stepping on the first trap is totally my fault for not calling it out… yeah, I screwed up. But maybe once you hit the first trap, stop and do a Perception check instead of just keep walking? Moving forward onto the second one… that’s on you man. And, OK, I’ll say it: in the moment, it almost seemed like he wanted to take the additional damage so he could add it to the list of grievances. “Fine, you’re not going to tell me where the traps are? Well, I’ll just step on ALL of them!” Contrast that with Seth having Gomez just kinda downplay getting hit by the trap and continuing to negotiate as if nothing had happened. Squeeze the water out of your robes and move on. Something about that just cracked me up.

(Somewhere in here I’m also wondering how many individual traps I could effectively call out in the span of a six-second round while also taking actions of my own. The best comparison I can think of is those war movies where they call in grid coordinates for an airstrike, and it’s not an immediate process.)

Of course, the fight eventually started despite Seth’s best efforts as peacemaker. Clearly, the level-headed female kobold we were told about (Shirek or something like that?) is not the one in charge so we’ll have to fight our way to her. Overall, they’re kobolds, so I’m not that worried: we’ve faced them in a few of the Black Lodge games, and they’ve been pretty wimpy up to this point. The boss kobold is a little trickier than the others, but once we get past the traps and focus on straight combat, I suspect this won’t be too much trouble.

And indeed, we begin to whittle their numbers down, get the boss dealt with, and the last few escape down the hall. So it’s a chase, then. (Caught myself on the edge of yelling “the game’s afoot!”) Unfortunately, the chase will have to wait until next time, as we’re out of time for this week.

In lieu of my usual reminder to visit our Discord channel (though you should still check that out), I’m going to close with a few words about tomorrow’s election for the Americans in the crowd.

First, get out and vote if you haven’t done so, if for no other reason than to preserve your right to complain about the outcome for the next four years: if you didn’t vote, it’s hard for those of us who do care to listen to the opinions of someone who didn’t even bother to grab the lowest-hanging fruit of citizenship.

I’m not going to tell you who to vote for, though I can’t pretend to be neutral, and I feel like I’ve been generous about dropping hints over the last three-plus years which side I stand on. I’d love to bust out a passionate Sorkin monologue in defense of the things I believe in, but… at the end of the day, we’re not Roll For Political Commentary. I guess I’ll have to hope y’all are either already in agreement, or pick something up through osmosis.

If I’m going to offer a message, it’s this. The situation with the pandemic has made this election weird, and there’s going to be a lot more mail-in ballots than usual that are going to take extra time to count, and each state has its own rules about when they can start processing those. We might not have a clear winner tomorrow night. Whichever side you support, see that as normal and expected, not some sinister agenda to steal the election – regardless of who appears to be winning when polls close in California. If Trump’s leading at 11 pm, you should want everyone’s vote to count. If Biden’s winning at 11 pm, you should want everyone’s vote to count. That’s democracy. That’s America.

OK, that’s all I got. See you next week.