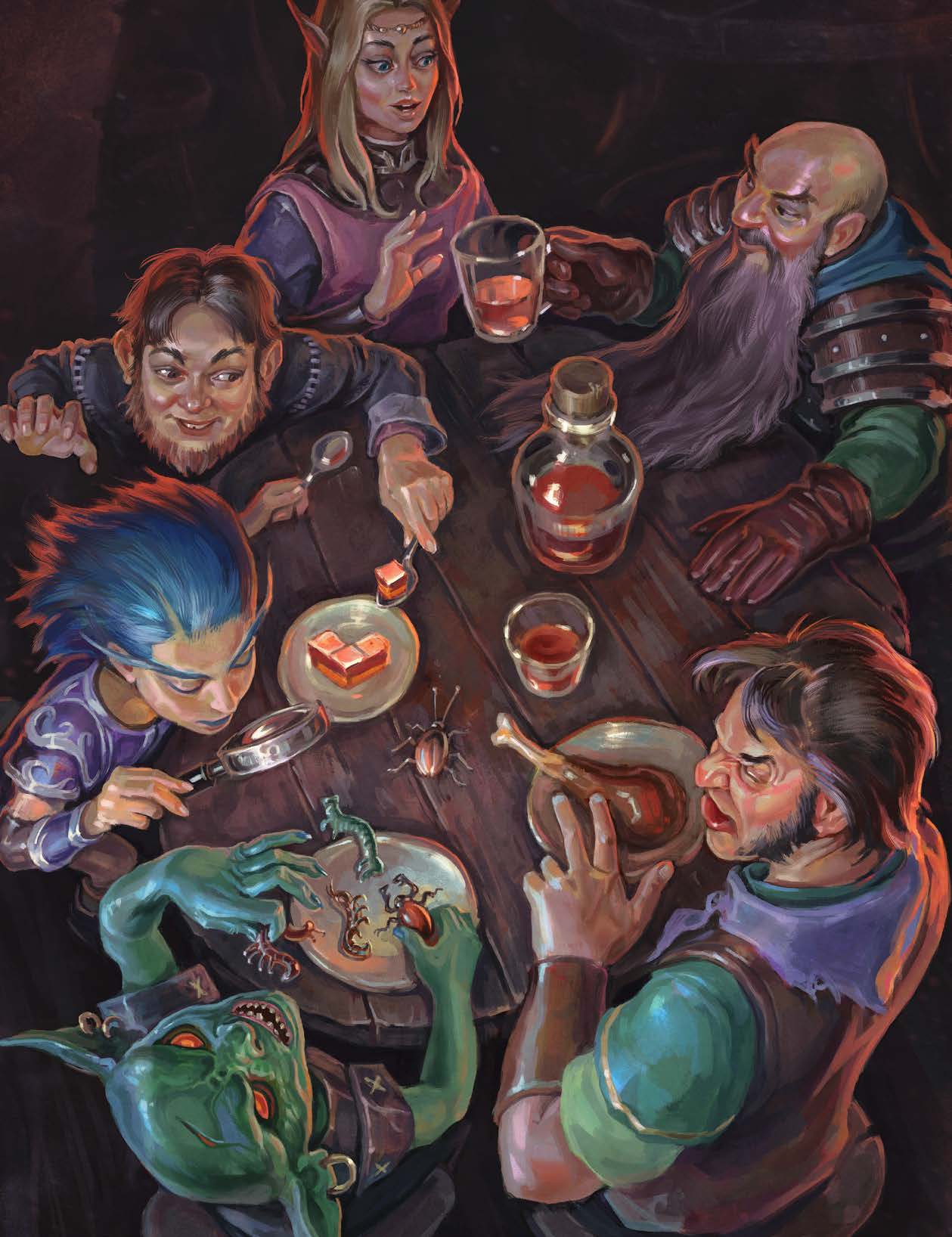 Jason recaps the events from Roll For Combat: The Fall of Plaguestone, Episode 14: Brix It Up.

Shhhh! I have to type quietly tonight. Don’t want any trick-or-treaters to notice I’m home, as I have no candy to give out. Not a big Halloween guy – I did costumes for a few years when the kids were the right age for it, but these days, I figure part of living in the adult world is the freedom to go to the grocery store and buy a bag of mini-Snickers when you like. They’re an anytime food!

This week, there’s a bit of a logical disconnect at work here. Going by the numbers, this is something like the fourth or fifth episode where the main storyline has been tucked away in a drawer while we work on side-quests. And with not a lot of fighting, either – yeah, there was the ghost from Sir Kent’s storyline, but that’s about it. It’s like Adventuring Dim Sum, and we’re loading up on appetizers! On some level, I ought to find that burdensome and annoying – that’s basically a month we’re talking about, and I’m generally someone who wants to keep things moving and I find combat to be the most interesting part of the game.

And yet, I haven’t really minded that much. Well, that’s not entirely true. As the official stenographer of Roll For Combat, it’s been a little tough to WRITE about side-quests for four straight weeks. But playing it and listening it has actually been kinda fun. Relaxing even.

I feel like a lot of that can be chalked up to the chemistry of different groups and playstyles. If this was the Dead Suns group, I feel like we’d have moved on more quickly or perhaps even blown off the side quests entirely. (I can imagine an exasperated John saying “nah, that’s stupid, we’re not doing this”.) Those guys tend to be fairly goal-oriented and tend to want to keep things moving. This group… I don’t know if it’s the personalities, the increased focus on roleplaying, or the fact that Second Edition is a new game system and we want to slow down and process things a little more, but there’s more of a “stop and smell the roses” vibe to the whole thing. Of course, some of it may also be simple impatience at work: the difference between a campaign that’s been going for two years versus one that’s been going for two months.

So, let’s take stock of where we are – basically I’d call it one-and-a-half complete. Prue seems like she’s DONE-done. The ghost was killed and put to rest, she got a magic sword, Sir Kent seems to be on the path to recovery – it’s hard to see anything left to do with that storyline. Celes is the “half”. Her story is largely wrapped up as well, but there’s still that ceremony that involves talking to the demon – is that the start of a whole other chapter or just epilogue (light roleplay, maybe unlocking the medallion)? Gut says the latter is more likely, just because to keep it going too much longer would threaten to overshadow the main mission.

Then there’s Brixley and Cade. We’ve established what we’re supposed to be doing – he’s teaching the next generation of remorseless teenage assassins, and I’m founding an alehouse masquerading as a church – but there doesn’t seem to be a firm resolution in either story yet, and OK… no PHAT LEWTZ. (I guess Metamon is going to do some crafting for us, but if “enchantments for everyone else’s gear” is the extent of MY reward, you’re gonna hear me get a little salty and break out the big-boy swears.)

What does resolution look like for those two quests? For Cade, he got the swords to his pupil (Peri?) and taught her some moves, so I assume there would be some sort of final test of her skills. Either she has reason to fight alongside us, or maybe there’s some sort of non-lethal duel against Cade as her teacher. For Brixley, I assume I have to get the church up and running to the point where they can hold a service there, and then maybe… I get a boon from Cayden Cailean or something.

Or, given the ribbing Brixley is taking about his fashion sense, maybe I should be hoping for a wardrobe of muted tones. Rhinestones? Disco Brixley? Come on… it’s not THAT bad. I figured he was fey-adjacent and a former noble, so he should dress the part. If I’d known it would become A Thing, perhaps I should’ve put him in a burlap sack and been done with it.

Meanwhile, in the main quest, whenever we do get that going again, it sounds like the ranger is going to feed us a lead on the source of the corruption where I assume we find the mysterious V. (No, not Hugo Weaving.) And in the process, we get to learn cool ranger tricks. Well, Cade sounds like he’s going to – not sure about the rest of us.

And that’s where we’ll pick it up next week. Sorry, this week’s column is a little short, but it’s been a bit of a week. Next week, we’ll hopefully get back to the main story and things will pick up a little. Until then, feel free to drop by Discord and join the ongoing merriment and let us know what you think of the show. Thanks for listening, and we’ll see you next week.