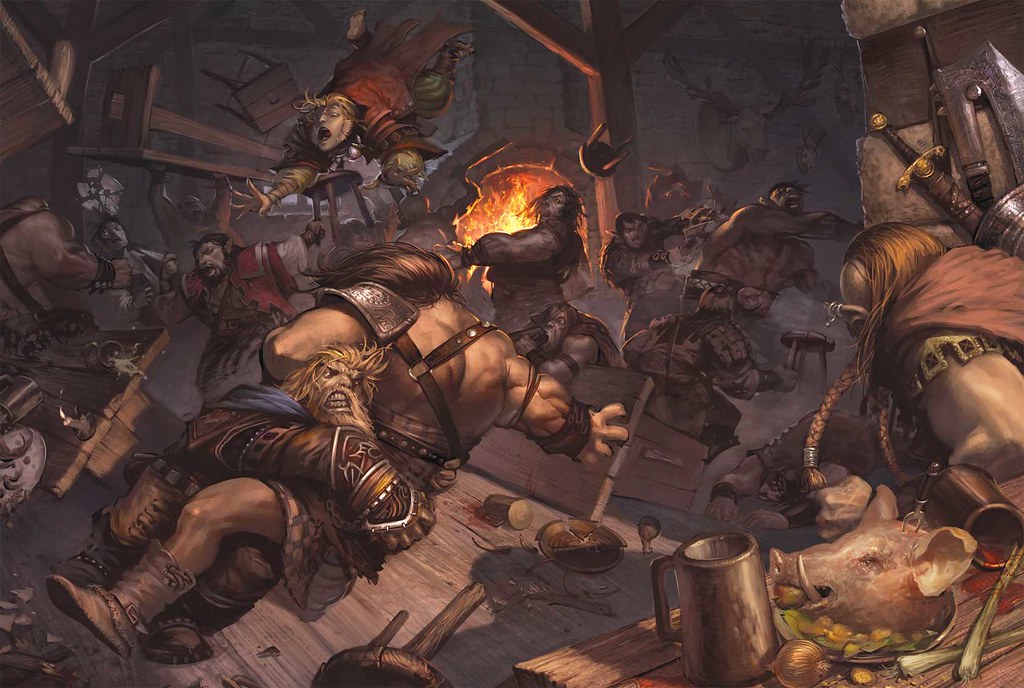 Jason recaps the events from Roll For Combat: The Fall of Plaguestone, Episode 13: The Spirit’s Spirits.

For me personally, this week was a bit of a change of pace. I wouldn’t go so far as to call it the Brixley Show, but this week’s action was more in my wheelhouse after a few weeks of mostly riding the bench. Brixley finally gets his side quest, and the main plot starts to come back into focus. If it sounds like I’m complaining, it’s not meant to be that – we each got a side quest, and it just happened that Brixley’s ended up being the last to come together. I figure if we had prioritized the enchantment runes and gone to visit Metamon earlier in the proceedings, I’d have been done and someone else would be batting last; it’s just a byproduct of the order we chose to tackle tasks in.

Specifically, Brixley has an opportunity to convert some portion of the town to followers of Cayden Cailean if he plays his cards right. It’s totally a seller’s market – the town’s dreary and run-down so it could use some divine inspiration, but religion’s been getting the stink-eye since the “curse” started, so there are no other churches in town at the moment. There’s even an abandoned church ready to be claimed and re-purposed for the task. And, OK… getting ahead of myself and/or metagaming, could there be a boon in the works as a reward for doing this? It seems like starting a new branch and converting an entire town might curry some favor with the Big Drunk In The Sky. At the very least, maybe Metamon would be willing to give us a home-team discount on moving those runes around. One can only hope.

We also get to move a little further in the main storyline as we meet a ranger, Noala, who had already been investigating the rise of the Crazy Critters from her end and wants to compare notes with us. Not gonna lie – when she first rolled up with a cart full of dead wolves, I thought she wanted to fight us for killing the poor fluffy animals. It sounds like she has a lead on where the corruption is coming from, and going a step further, she also offers to teach us ranger-ly ways if we want to learn them. Cade seems the most immediately intrigued by her offer, but we’re all considering it to some degree.

First, let’s talk about the mechanic in general. I really like the potential of this, and I am curious to see how it plays out in the wild. It’s always been a little weird that skills advancement is so structured that the ONLY place you could pick up new knowledge is from your level-ups. The idea that knowledge exists out in the world and can be shared and gleaned from actual story interactions is a welcome addition to the game and opens up exciting possibilities. Also, how many times has it happened that you meet some cool NPC that can do all sorts of amazing stuff, and you think to yourself “boy I wish I could learn to do that!”. Well… now – in certain circumstances – you can.

Whether Brixley is going to bother with ranger training… still deciding about that one. On one hand, gnomes have a fey connection to them, so as a roleplaying choice, it wouldn’t be a total immersion breaker to learn some woodland skills. Also, while Brixley isn’t as DEX-based as Cade, he’s not really a hulking tank either. And of course, Lore skills come under the heading of “more is better” – might as well learn everything you can. Never know when it might come in useful.

If there’s a downside, it’s that we might not actually be able to use the skills we learn. My understanding is that the skills we learn might be “ranger-flavored” general skills that anyone can take, or they might be actual class-specific skills. If it’s the latter, it’s fairly unlikely I’m going to make Brixley a paladin-ranger just to get one skill, even a really good one. So I suppose it will come down to what else is going on and how much time the training takes and what the trade-off would be (if any). If it’s truly free time, why not? If it comes down to an either-or of doing the ranger training or working on “my” church, I’ll probably just skip it.

Despite being a little more Brixley-focused episode this week, it was actually a pretty short episode overall and I’m a little under the weather, so I’m gonna call it there. They can’t all be three-volume treatises. We’ll be back next week to keep banging away on sidequests and hopefully move closer to finding a source of the corruption that’s killing the town. While waiting, feel free to drop by Discord or other social media and let us know what you think of the show. Thanks for listening, and we’ll see you next week.