Talking Combat 106: A Stephen By Any Other Name - Roll For Combat 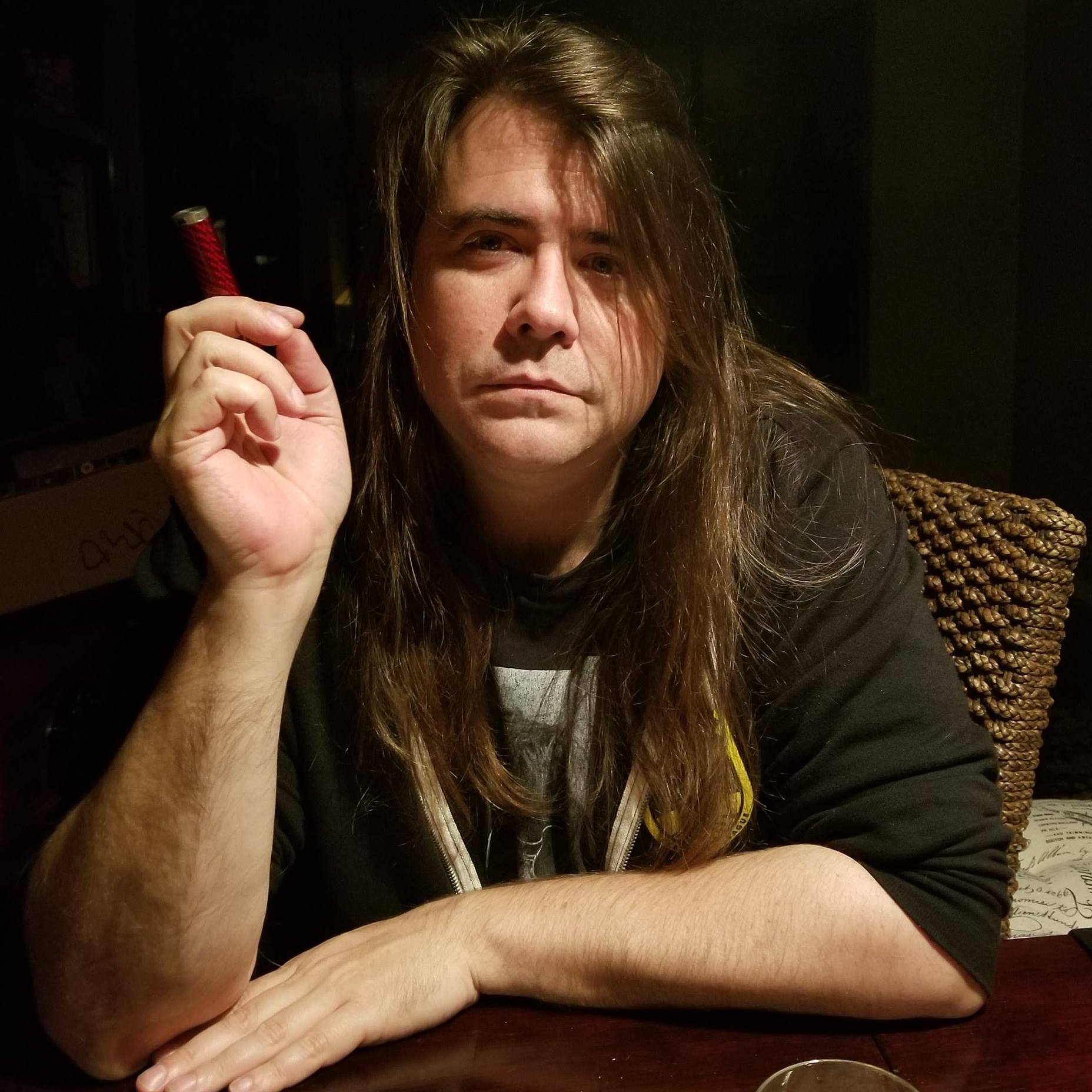 If you’re gonna have a super-sized episode of Roll For Combat, that’s how you do it, I suppose. Special guest, big boss fight, crazy cliffhanger… it’s almost like the season finale of a TV show, except we get to come back next week and do it all over again!

First of all, props to Stephen Radney-MacFarland (SRM, from here on out to avoid confusion with “Our Steve”) for coming on and playing the boss for us. It’s certainly not that Our Steve does a bad job of running the game, but it’s always nice to have somebody come in and mix things up a bit. Especially someone with a personal connection to the source material who can throw in an extra spoonful of the author’s original intent.

Speaking of mixing things up, one stylistic difference I noticed is that SRM had a much more direct approach to combat than Our Steve does. Steve tends to play “fancy” in combat – I don’t know if it’s a sense of theater to make a better show, or wanting to play Vulcan 3D chess, or that Steve is just genuinely curious to see what all the special abilities do, but he’s very much about getting into the deep crevices of the enemy statblocks. Lots of positioning, lots of using special abilities. SRM, on the other hand, was much more about getting in faces and doing full attacks – there’s an unsentimental streak to him. Then again, some of that may have just been making use of the available tools – we know from our pal Rusty that Envoys tend to not have a lot of extra tricks, and a dip in Soldier wouldn’t have changed that much. And the robots were likely pretty simple security drones. So maybe this is just a Keep It Simple, Stupid fight, and would’ve played out much the same no matter who was driving.

Speaking of those drones… time for the other call-back to previous episodes. A few episodes back I mentioned there was one thing we mocked that turned out to be useful, and one thing we forgot about entirely.

The “thing we forgot about entirely” was the Sovereign Helm. Remember that? It’s a helmet that allows the user to assume limited control over technological constructs. It’s only a round-by-round thing (move action to use, and then a move action to maintain control) and once they make a save, they’re immune for 24 hours, aka the rest of the fight. But being able to make the robots shoot at each other or at the big boss might have been a fun little game-changer.

Then again, as I’m writing this (and looking up the item for reference) it also dawns on me that using the Sovereign Helm would’ve come at the expense of issuing commands to CHDRR. Or, I could’ve issued commands to both, and then I wouldn’t have been able to attack at all, which… while it would’ve been kind of a cool Professor X moment controlling an actual multi-robot army, would’ve been robbing Peter to pay Paul in terms of total damage. So maybe it wasn’t the great lost opportunity I thought it was, or at least maybe someone else in the group should’ve been using it, even though it superficially seemed to be a Doctor Tuttle item.

The one thing I forgot about this fight until re-listen is how close CHDRR came to buying the farm. Yep, he literally finished the fight with 1 hit point. Again, I think the main culprit here was SRM’s more direct fighting style. Steve tends to go after the players first, and while he doesn’t ignore CHDRR entirely, CHDRR is usually only hit by area damage or, sometimes he ends up a target when Mo chickens out and leaves him up front by himself. So I’ve gotten in the habit of parking CHDRR near the front (but distant enough to mitigate area attacks) and picking adds off as best I can. (In these situations, my optimal play is looking for a chance to set up the line effect on his Junk Cannon.) SRM, on the other hand, was having none of that and gave CHDRR a good pummeling pretty much from the start – I moved CHDRR up into Standard Supporting Position, and SRM’s response was “have a few punches in the face”.

If you want to get cynical and meta-game, the boss battle at the end of an adventure path would’ve been a fine time for one of CHDRR’s noble sacrifices, but I’m glad it didn’t come to that. Based on how the episode ended, it’s unclear if I’d have the full 24 hours needed to rebuild him, and I don’t think we want to go through Book 6 without my trusty sidekick.

While all that was going on, we also got to witness Mo’s jetpack heroics. Full disclosure: I also had a jetpack and briefly considered going airborne as well – first as a flanking maneuver to get behind the boss, and then I thought about joining the chase. But a few things held me back.

First, I was a little worried about the possibility of the jetpack suffering a critical failure and falling to my death. So… #1, Cowardice. Second, by the time I thought about doing that, the drones were starting to overrun us (and CHDRR, in particular, was showing a lot of red), whereas Mo was basically locked in a 1-v-1 with the boss, and seemed to have his situation reasonably well in hand. Staying put seemed like a better use of my efforts. Third, I kinda realized that if events unfolded such that it came to any sort of mid-air grapple, I’d be TOTALLY screwed – I put a +2 bump in STR to manage encumbrance, but I’m not a grappler by nature. So I pretty much decided that was Mo’s situation to take care of and stayed on the ground.

(Also, as it turns out, Mo’s haste circuit was a difference-maker I didn’t have anyway. Given the head start the boss got, at best I could’ve kept pace and maybe fired from a distance, but I don’t think I ever would’ve caught up. Or, maybe I might have gained 10-20 feet per round if my “Fleet” applied to all movement forms, but then we’re getting into the jetpack only having 20 rounds of charge.)

Anyhow, we finally end up winning the fight and return to Moon Six to clean up and destroy the Stellar Degenerator, only nothing’s ever that simple because, of course, it isn’t. I wasn’t as vocal as Chris, but I also thought the AI’s plan sounded a little sketchy because the first few steps of using it and the first few steps of destroying it sounded like they’d be the same plan. Some of this is 20/20 hindsight, but wouldn’t it have been easier to induce some sort of system overload that destroyed the ability to open the gate at all, which would leave the Stellar Degenerator safely sealed in the demi-plane? Or is it just “too many redundancies/beyond your technical capabilities” and move on.

So we go with the AI’s plan – Rusty because he wants to steal it for himself; the rest of us because we don’t have a better idea – and everything shortly goes to hell. Literally and figuratively. The long-forgotten Corpse Fleet returns (though if you’ve been reading these columns, I’ve been WONDERING when they’d show up again), dropping a huge fleet into the system, and at roughly the same time, the control system gets all hosed up so we can’t close the demi-plane again, leaving the Stellar Degenerator free for the taking. And the AI that was going to help us fly the SD into the sun disperses itself into the planetary defenses. So we can destroy the Stellar Degenerator – all we gotta do is traverse an entire enemy armada, and then pilot it into the sun without the AI’s assistance. Oh is that all?

But hey, we’ll be Level 11 when we go on this suicide mission, so we’ve got that going for us.

Luckily, this isn’t TV so you don’t have to wait six months to find out; just come back next week, as the adventure resumes in Book Six. While you’re waiting to feel free to drop by Discord or other social media; give us your feedback on the show or just join the RFC community. Thanks for listening, and we’ll see you next week.