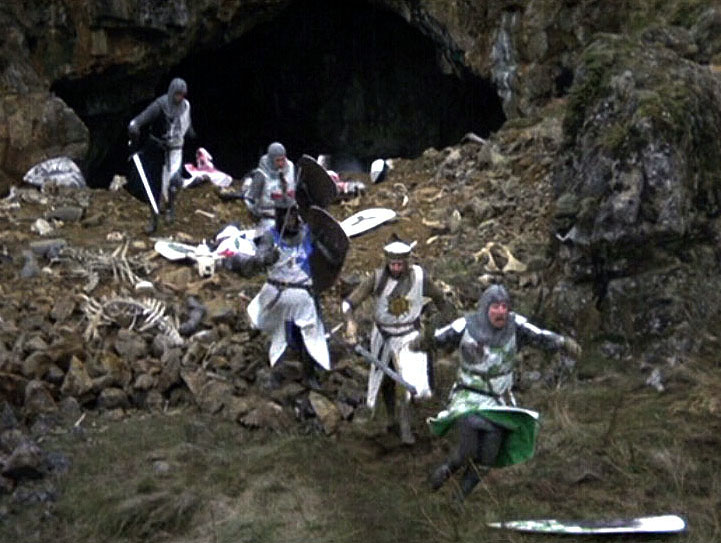 Jason recaps the events from Roll For Combat, Episode 105: Do NOT Go In There!

If you remember a few episodes back when we leveled and divvied up treasure, I dropped a hint that a couple of things would become relevant in later episodes and I’d circle back when we reached that part of the story, right?

I feel like the audio didn’t really convey the full gravity of the situation Tuttle found himself in. The fight began at the door of the bathroom, which was about 15 feet down a blind corridor, and if the creature had stepped out into the hall, Tuttle would’ve ended up basically trapped in a dead-end with the Marooned One between him and the exit. So not only was he going to have to break a grapple (a fairly monumental task as is given the strength disparity), but he was about one round from having some really awful choices. Even if he got free before the creature moved into the hall, he’d have to run past and eat an attack of opportunity. If the creature got into the hall, there would literally have been no escape and his only other option would’ve been to run deeper into the dead-end and find somewhere to hide. Which not only might have been futile but could’ve even caused encounters to bleed, which would just hasten his demise.

So yeah, I was looking at being pretty screwed for a few moments there.

But then, Chris saves the day with the perfect tool for the job. Not only was I free of the grapple, but we ended up nice and save a good 50 or 60 feet away (and with Mo in between to run interference). I mean, he’s gonna be insufferable about it and I may come to wish the Marooned One had killed me before it’s all over, but for now, Tuttle lives to fight another day.

Once we got the creature out of the cul-de-sac and were able to fight it in the open, it actually became a fairly easy fight through a combination of luck and sensible tactics. Certainly, the luck was in Mo landing almost 100 points of damage – half the creature’s health – in a single round of attacks. The tactics were as Steve described, playing a game of “keep-away” – staying far enough away that it became difficult for the Marooned One to do a full attack of re-establish the grapple. Without that, it was mostly hitting with its comparatively wimpy knife. To be fair, I think Steve probably gives us more credit than we deserve for Ender’s Game-level tactical thinking – I don’t know that it was a coordinated tactic as much as it was four selfish people practicing self-preservation and trying to pawn the problem off on someone else in the group in a way that happened to resemble a strategy. But if Steve wants to give us credit… ummm… yeah! Just like we drew it up on the chalkboard!

I also think we were helped by the fact that it was an almost entirely offense-oriented fight. I did notice the Marooned One didn’t seem to have much in the way of resistances (or we got lucky and didn’t have those damage types) and wasn’t that hard to hit with Bob’s Envoy bonuses. So it was really just an all-offense slugfest, which tends to favor the side that has more total attacks. I’ve noticed that it tends to be when resistances or fight logistics take damage off the table that things get their messiest. (See also: the boss on Istamak, who was on an elevated catwalk for the first half of the fight, and also hitting us with a slow effect.)

I was a little surprised Steve let you all in on the dirty little secret of this week’s episode. Yes, Steve basically “steered us” to take that fight and put the remainder of the compound on hold for a week so we could get the author of this book on the show next week. Guilty as charged. As he said, it’s a function of having special guests – it would be weird to start an encounter in one voice and end it in another. It is what it is.

Now I know some people would argue that by the letter of the law, it’s not the GM’s job description to be steering the game to the desired outcome. There’s a little bit of “Want to be run through your session on rails? Play a JRPG” sentiment, that players ought to be making these sorts of calls for themselves. On the other hand, what absolutely IS in the GM’s job description – doubly so when we’re packaging this for a podcast, and especially when we’ve only got three hours once a week – is time management. The GM is the one person who has at least a rough sense of where the logical breaks are, and massaging the flow of the game into the available timeslot so you get a satisfying session is something of a greater good that should be considered.

It’s something that’s explicitly accepted in convention settings. You have a two or three-hour window, so the GM will figure out ways to slow down or speed up to fit the game in the window as best as he or she can. I think if there’s a difference here, I think that time management is usually something that’s done more subtly, and not explicitly spelled out. A GM might speed things up by removing an encounter to get the party to the next major plot point before wrapping up for the night; they might also slow things down by making a locked door or the search of a room take a little longer. NPCs can give out information quickly or slowly. The GM might add or remove a few hit points to make a fight longer or shorter. It might even be as subtle as making the description of Door A more enticing that Door B to get people to pick the one they want the party to choose.

Here? OK, Steve said, “don’t go south yet because I have something in mind for that part of the book”. But does that really spoil anything important? We still don’t know what we’ll be facing… in either direction. We don’t know if the “surprise guest” is the boss, a friendly NPC, an inexplicable reappearance of Meats and Lasko, it could still be pretty much anything. As long as the essence of the encounter is not being spoiled, I see no problem with doing a little air traffic control on the session to make things fit together more seamlessly. We’re all adults here.

So yeah, next week we’ll get to see what that big surprise actually is, and hopefully, continue to work our way toward the capture or destruction of the Stellar Degenerator. Still got a universe to save, after all. I hope you’re enjoying the adventure so far, and hope you’ve had a chance to drop by Discord and join the ongoing conversation. Thanks for listening, and we’ll see you back here next week.