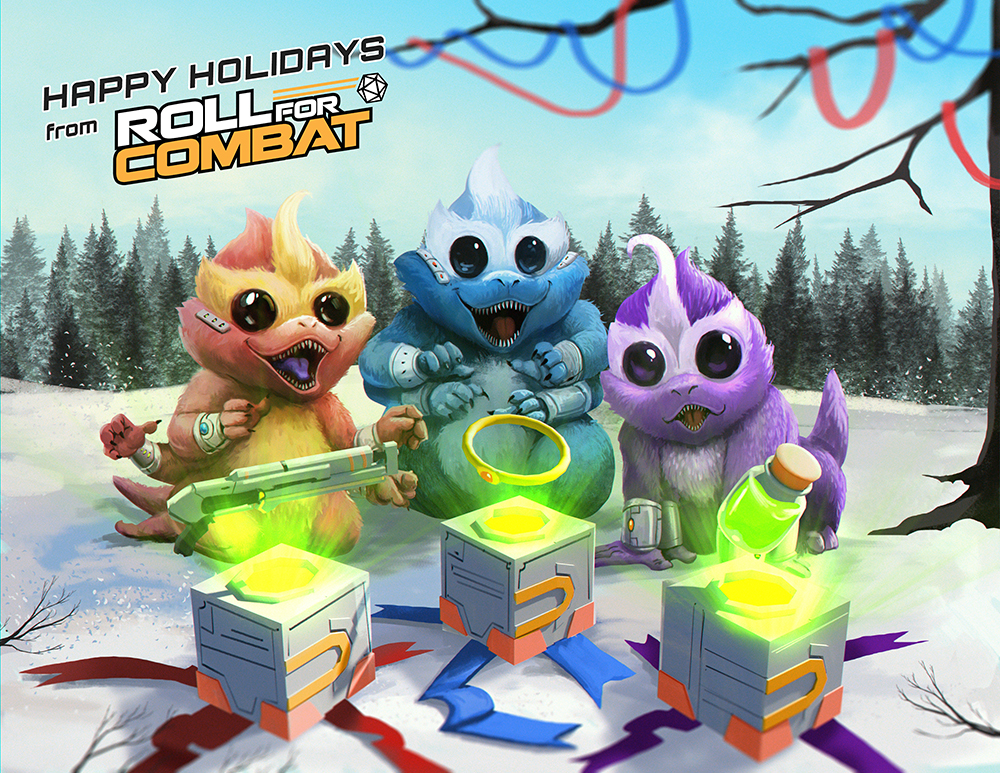 ‘Twas the night before Christmas, on board the Hippocampus
The team had just returned from fighting a Space Krampus.
The stockings were hung by the airlock with care,
Hirogi’s was heavier… wait, that’s not fair!

The RFC team were nestled all snug in their beds,
Wondering why GM Steve so badly wanted them dead;
Tuttle in his lab coat, and CHDRR in the charger,
With some irradiated fungus, waiting to grow larger,

When suddenly the proximity alarm started to screech,
But Mo merely mumbled, “I’m trying to sleep.”
Tuttle went to the sensors to see what was up,
Grabbed the “space coffee” and poured a new cup.

The moon cast a fantastic glow on the bridge
So Tuttle adjusted the IR filters just a smidge,
When what to his wondering eyes should appear,
But a tiny space cruiser, pulled by eight… reindeer?

Tuttle thought to himself “that seems out of place,”
“Reindeer can’t survive the vacuum of space.”
But the driver’s next trick would really astound,
As he called to his reindeer, despite there being no sound.

‘Now, DASHER! now, DANCER! now, PRANCER and VIXEN!”
“On, COMET! on CUPID! on, DONNER and BLITZEN!”
Tuttle thought: “one of humanity’s most puzzling features,
Was to give unique names to clearly identical creatures.”

Tuttle thought for a second about switching to guns.
Nine distinct targets? That might be kind of fun.
But then the sensors showed the presence of loot,
So Tuttle decided to wait and not shoot.

Then Tuttle heard an ominous CLANK on the hull,
And he briefly regretted not sending a distress call.
Transporters engaged with their tell-tale sound,
And some fat dude materialized… at least 300 pounds!

He was dressed in red, from his head to his foot,
But thanks to transporter malfunction, was covered in soot.
Tuttle switched off the safety with an audible click,
Pointed his pistol, and said, “let’s see those hands and no tricks.”

Santa paused for a moment, pipe clenched in his teeth,
He wasn’t used to being treated like a common thief.
He said, “Hold on, you’ve got the wrong idea, kid,
I’ve got some stuff for you, and I’ll overlook what you just did.”

Tuttle said: “Overlook what? CHDRR’s ready to pound,
For such a big drone, his speed will astound.
If you’ve got presents, I’m happy to take them,
If you’ve got some for the team, I’ll go and wake them.”

Santa thought for a sec, and said, “Let’s stay nice and silent,
That Mo’s got a temper, he’ll probably turn violent.
I’ve got treasure for you and I’m happy to give it,
But there’s no time to chat; there’s an armada to visit.”

So he put down his sack, and started his tasks;
Grenades, and guns, and healing serums, in flasks!
Lab gear for Tuttle, and what’s even better,
Several large crates, with new mods for CHDRR.

As soon as he finished, he gave quite a shout,
And used the ensuing confusion to beam back out.
Leaving one final gift standing in his place,
An EMP pulse, so the Hippo couldn’t give chase.

Santa’s ship unlatched; just like that, he was gone,
Except for the scrambled message that came over the comms;
“Merry Christmas, RFC, your antics were droll,
But next year, I think I’m giving you coal!”