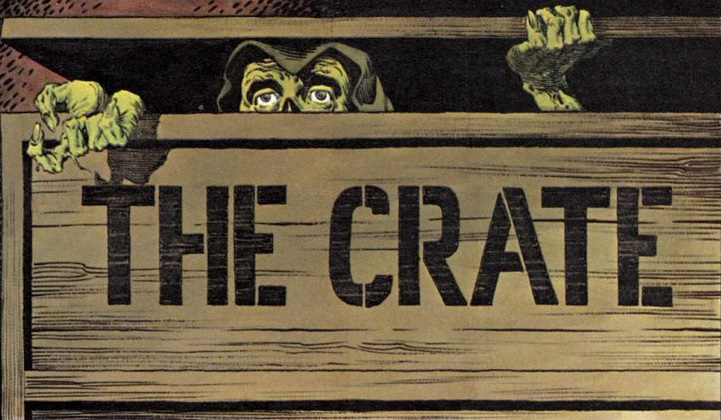 After two straight sessions of dealing with space dogs, it’s refreshing to get back into explore mode. But we start with a lively debate about what to do about the mysterious crate.

I won’t rehash the arguments in their entirety, but the choice boils down to: do we hide behind plausible deniability, deliver what we were asked to deliver, and let the consequences flow downstream; or do we take some responsibility and open the box, even if that might risk losing our pay and/or making our current benefactor mad with us? Are we by-the-book professionals (“You are fully licensed and bonded by the city, aren’t you, Mister Plow?”) or follow our ethical compass, perhaps in the name of serving a greater good, but perhaps torching a perfectly good gig?

Partly as a personal choice, part as a roleplaying call on Tuttle’s part, I’m currently on the side of “FedEx or UPS wouldn’t open up your package; why would we?” Tuttle wouldn’t want some random person looking through his research, so he’d probably come down on the side of doing the job he was asked to do. (Falling back on alignments, upholding a morally ambiguous contract sounds like a pretty Lawful Neutral take.) Having said that, I still acknowledge there’s something shady about having us smuggle a package off a ship under quarantine that doesn’t sit right. I don’t get a sense that Gevalarsk Nor is Evil-with-a-capital-E, so I’m not really worried him trying to wipe out Absalom with space plague, but I’ll concede that Rusty and Mo’s concern is at least generally valid.

I totally didn’t expect Hirogi to be the one to side with me, though – Chris tends to be all about exploring anything that might be a source of loot, so I assumed he’d want to dive right into the crate. I would’ve thought he would have been the advocate for “lock CamBot in a closet, bust the crate open, steal the contents, and then claim it was empty.” One of life’s little surprises that he’s on my side.

The exploration reveals no further akatas (thank goodness) but still plenty of signs of their presence. And… we find the flamethrower. Don’t worry, people; I’m going to be lobbying hard for CHDRR to get the flamethrower at some future date. It makes tactical sense since he’s usually near the front of the fight, but let’s be honest… “CHDRR With A Flamethrower” is one of those phrases like “Hobo With A Shotgun” that just has to be willed into reality. I’m not worried about it right this second because our primary foe is flame-resistant and it only has enough ammo for two shots, but long-term… it’s gonna happen, even if I have to get petulant and buy a second flamethrower to make it happen. (“I’ll make my own flamethrowing drone… with blackjack and hookers!”)

Somewhat overshadowed by Dog Metal Nuggets and dreams of flamethrowing drones, we also find our first concrete signs that we may not be the only humanoids left on the ship: locked doors, signs that some of the other cabins have already been searched. Is that a rival crew scavenging or looking for answers? Survivors who managed to lock themselves up somewhere to wait for help?

Annnnnnd then Mo takes a laser to the face. A crit, no less. If there is a survivor, apparently it’s the kid from Home Alone.

I think this was a twofold failure. First, I think the idea that there were survivors kind of took over and we got a little too eager to be heroic rescuers and should have been a little more cautious about the first closed door we encountered on the entire ship. But also, we haven’t really run into a trap yet, so I think we kind of underestimated that as a possibility. In the fantasy setting, you tend to see certain situations as potential trap locations. In a sci-fi setting, maybe we’re not quite as familiar with the warning signs yet. Also, it doesn’t fit as easily into the genre – you can’t exactly build the traditional 10-foot spiked pit into a spaceship. Well… not easily, anyway.

So Mo survives (just barely), and to add insult to injury, no actual people to interact with, and the stuff the trap was protecting wasn’t even that useful. A couple healing serums that don’t even make up for the damage Mo took, med patches that might help with Rusty’s disease, and we get our introduction to fusion seals… through a fusion seal that… only works on one weapon in the entire galaxy, which we don’t have anyway? Are we reading that right?

I will say the system itself seems pretty cool. I think the idea of doing away with plus-es in favor of special abilities is pretty neat and I LOVE the idea that you can move your seals from one piece of gear to another if you find one you really like. But the idea that a seal only works on a narrow range of weapon levels – I get the concept (I suppose it’s not that different from gem slots in WoW), but I worry it might lead to too many situations like this one where you can’t find the right combination of seals and weapons, and you might end up with too much stuff you can’t use. But maybe this will be the exception, not the rule, and future seals will be more useful.

And that’s where we have to leave it for this session. Rusty is still stuck with space rabies, and Mo is covered with soot and grill marks. We’ve still got one more closed door to deal with before heading toward the bridge. Will we find survivors? New enemies? Will Rusty succumb to space rabies, forcing us to take him behind the barn and shoot him? Stay tuned to find out.

As always feel free to join us on social media and join the conversation? What do you think we should do about the Eoxian crate? What do you think of the fusion seal system? Who (or what) should CHDRR light on fire first? Drop us a line and let us know your thoughts; and as always, thanks for listening.