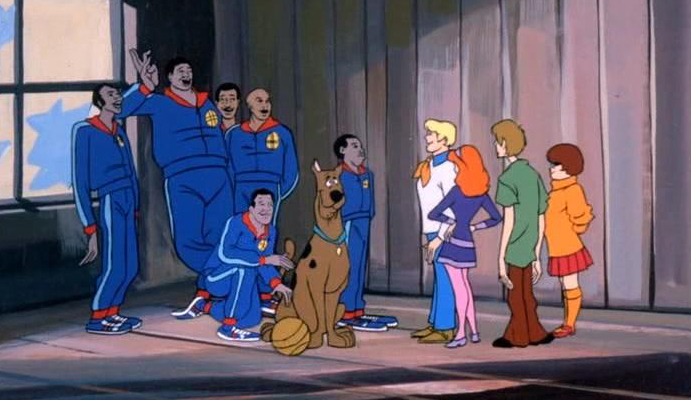 I’m going to go a little out of order this week and start with the elephant in the room: Darius’ big date night.

I was warned. I thought I was prepared. Turns out, maybe I was not.

“You think the birthday parties are something? Darius is going to go on a date, and it’s gonna get a little weird. Even for us.”

I think what was jarring, with the benefit of 20/20 hindsight, was having two people who had been playing Darius’ siblings for the previous YEAR play groupies five minutes later. That’s what made it a little weird for me – I couldn’t step far enough away from “Alhara and Hap” to be comfortable in the moment. And I wouldn’t want to put words in Loren’s mouth, but it seemed like she felt something similar, because while Vanessa seemed quite willing to go for it, you could sense an almost IMMEDIATE “what have I gotten myself into?” vibe from Loren. And her character Kat was the one who asked for the date in the first place. Vanessa was just the wing woman. (Theoretically. SHE WEREN’T ACTING LIKE IT.)

Then again… Door #2 would be 20 minutes of Steve and Rob T. flirting with each other, and while it’s probably something we would have been telling our grandchildren about, it would probably be for all the wrong reasons. (“Mom… why does grandpa curl into the fetal position and weep uncontrollably whenever you cook bacon?”)

Meanwhile, back in the more sedate world, we FINALLY meet Papa Varus. I have to admit I spent the start of this exchange a little distracted. First, Steve said “Marcel” but with the accent he chose to use, I got “Mario” and my mind went to about two minutes of “when do we meet Uncle Luigi?” and “your princess is in another circus!” jokes. But then he said the Celestial Menagerie would be leaving for Absalom to participate in the Radiant Festival, and I gotta admit I had “crossover episode” on the brain from then on. As did several people on our Discord channel, as it turns out.

Now, this is something we’ve actually idly speculated about before: that maybe we’d have an Edgewatch/Three-Ring crossover as a special live episode for one of the conventions or something. But now this feels like it went from an idle speculation thing to something that could actually happen in the day-to-day flow of the show(s) because it’s now officially established that our shows are in the same time continuity. (The Radiant Festival only happens every 100 years, so… there can’t be two of them.) Of course, the real dilemma will be that we’re power-gaming our way through while they’re stopping for everyone’s birthday, so by the time they make it to Absalom (if they do), our Edgewatch guys will have hit level 20 and retired from the force. Just Sayin’.

Of course, the question I asked the Discord channel: who is the Scooby-Doo gang, and who’s the special guest (Batman, the Harlem Globetrotters, etc.) in this scenario? Technically speaking we’re the ones that investigate crimes for a living, but they have the dog and circus folk are more likely to be living out of the fantasy world equivalent of a van.

Depending on your answer, the Freds would be Darius and Lo Mang (do orcs wear ascots?), and Basil and Ateran feel like the Velmas. That leaves our Shaggies and Daphnes. On the circus side, Hap has to be Shaggy because she’s besties with Riley, leaving Alhara as Daphne. On the Edgewatch side, Dougie probably gives me the bigger Shaggy vibes, which leaves Gomez as a very odd Daphne choice… but I’m not sure anyone else works better.

(Damnit… now part of me wants artwork of the various RFC crews AS the Scooby-Doo cast. Though poor Ateran in a bright orange turtleneck? Maybe not.)

Of course, we’re still getting a LITTLE ahead of ourselves. This all assumes that a) the Celestial Menagerie actually leaves (we’ve only got Marcel’s word for it so far), and b) our gang eventually has a reason to follow them to the capital. Though that one’s pretty easy: there’s always “in search of bigger crowds, and what crowd would be bigger than Absalom?” But hey… at least it’s on the table now.

Meanwhile… the Varus family reunion was a bit of a mixed bag. I liked the roleplay and the interactions with the group and particularly thought it was nice that he was kind and welcoming to Ateran. (Calling his daughter dumb… maybe not quite so much, even if it was playful.) On the other hand, the CONTENT of the meeting was frustrating because it actually raised more questions than it answered. We know that the mom was into some shady stuff out in the Shackles, and while she may still be dead, it certainly wasn’t the simple story Dad’s been telling all these years. We also get a promise to deliver more information about Darius’ mark, but… we’ll get that next time apparently. So this was the meeting to talk about what we’re going to talk about in the OTHER meeting. Great.

But hey, we finished off with an Old Woody toast, and any time Old Woody is in play, it’s a good thing. I would like to point out that turning blue (as Marcel did) was one of the original OW effects Ezrik suffered the first time he drank it, so that was a nice little throwback for me. (I think Ezrik also may have developed temporary scales, but they flaked off the next morning. The problem is I forget which effects were Old Woody and which were from the Numerian fluid.)

There is one other issue I wanted to raise about the whole dad thing. ALL this time, I’d just been assuming the dad was something Steve and the group threw in to create some roleplay drama. Now, it’s starting to feel like a legit plot driver, like it was written into the adventure all along. So… either Paizo wrote some really clever hooks into this adventure path, or Steve deserves an extra gold star for folding his custom content into the main story so “organically” that I legitimately caught myself thinking Paizo must’ve planned it this way. I’m honestly impressed. In other cases where we’ve had custom content, you could “see the seams” more.

At any rate, as the episode comes to a close, we have a nice little interlude between Alhara and Ateran where they finally get a place of their own (sorta) – doubly wholesome given the debauchery going on at the diner. And then, as the episode ends… a bit of a shocker. Mistress Dusklight herself walks into the “enemy” camp. For a non-combat cliffhanger, this one’s a doozy. Is she there to fight? Make peace? Papa Varus made it sound like they were leaving town soon, so is this “settling up old scores” or “burying the hatchet”?

But of course, I guess we’ll have to find out next week. As always, feel free to drop by our Discord channel and let us know what you think of the show. (A few of you already have.) Thanks for listening and we’ll see you next week.