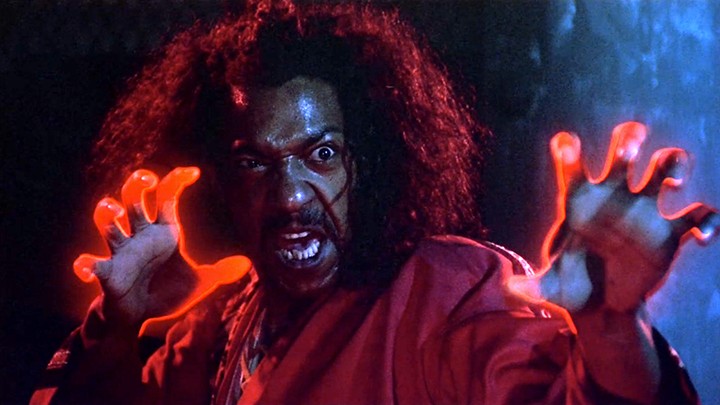 Well, that was a wild ride, wasn’t it?

Full disclosure: on some level, as much as I try to insulate myself and have a pure listener experience, working on the show, in general, handed me a few bread crumbs going in that nobody was actually going to die. First, Extinction Curse and Black Lodge use the same Roll20 environment, so sometimes the remnants of the previous session are still there and you can see the last few rolls that happened from the previous session. I tried to never look CLOSELY – partly to avoid spoilers – but I’m pretty sure a brand-new party member would’ve caught my eye. Also, we have an online board-game night on occasion, which both Steve and Vanessa are part of: some of the pre-game shop talk while we wait for everyone to get logged in (intentionally or not) sounded pretty strongly like business was continuing as usual. No “HEY, LOREN’S NEW CHARACTER IS EVEN WILDER THAN HAP!”

All of that having been said, this fight was close enough that I experienced a moment of doubt – I caught myself thinking maybe they’re just THAT good at keeping a secret. Thoughts like: “I’ve heard Vanessa talk about Alhara a few times, but am I SURE I heard her say anything about Darius recently?” started creeping in around the edges. So by the time Darius reached Dying 3, a little bit of uncertainty had crept into the equation.

The first thing that struck me about this combat was how much of it might have turned JUST on favorable initiative. If you remember, it was basically Creature #1, Entire Party, Creature #2, which gave our heroes ample opportunity to work their tactics as seamlessly as possible. The monsters don’t move behind cover and throw off the actions people lower in the order had planned. Nobody takes damage and has to withdraw to heal. If you think about it, being able to move together (and before the enemies) is a pretty significant advantage. Yes, you can get a similar effect by delaying actions – I’ve heard of some groups that use their first turn just to delay and get in the order they want to be in – but having it come up that way naturally was even better.

Now, on to the flaming squirrel in the room: Loren’s decision to cast a swarm spell. I think I get some of the strategies behind why she did it, but I do have to side with the majority that it probably wasn’t a good tactical move. Even before it turned out the swarm didn’t have enough actions to attack. The positive side is swarms tend to be harder to kill because they’re dispersed (unless the enemy has area effect attacks) and the damage they do is basically automatic – if you’re in a swarm’s square, you take the damage. So, there’s a scenario where it’s either a nice little persistent nuisance chipping away at the bad guys, or it forces them to “waste” a turn or two dealing with the swarm instead of hitting party members. On the other hand, how much damage would it realistically be expected to do? 1d6 or something? Hard to imagine that making a huge difference with these big uglies.

The follow-up to this conversation brings us to the etiquette segment of the program – how much teasing is too much? There’s probably no definitively right answer, so consider this more of an open discussion than calling anyone out in particular. But I have to admit after about the third or fourth joke about Loren screwing up, I was starting to feel like it was overkill.

On one hand, having a little bit of a laugh at someone doing something unexpected or making a mistake is just as much a part of table chemistry as any other part of the game. Whether it’s gallows humor as a means of coping with a dangerous situation or whatever, sometimes you make a crack about somebody doing something you wouldn’t have done. Over in our Black Lodge game, Mister Peepers does reckless things all the time, and we… ummm… “provide him colorful feedback”… there as well. So this isn’t me being all holier-than-thou. We all do it from time to time.

I do think, however, there’s something to be said for saving it until the danger has passed. It’s one thing to joke about something during the next long rest once everything’s OK and it’s on its way to being imprinted as a fond memory/funny story; it’s another thing to tell a fellow player “if we have a TPK, it’s basically your fault” WHILE the combat is going on. Finish the combat first, and THEN suggest maybe Hap should’ve just summoned one really big squirrel instead.

I suppose some of the reason this stands out for me so much is the fact that it’s so at odds with the rest of the character interactions within the Hap/Alhara/Darius family unit. In character, they’ve been really warm and supportive of each other – Darius and Alhara as characters would never say something like that to Hap. This was more Rob and Vanessa cracking jokes at Loren, but the roleplay relationships made it feel weird.

Now we come to the meat of the episode: Darius’ Last Stand and the activation of his mark. Which we now know gives him … barbarian rage? At the risk of giving some mild spoilers, I asked Steve a few clarifying questions (did Darius dip barbarian and hide it all this time?), and he said next week’s episode will provide a fair amount of clarity. So as far as sitting here attempting to parse the various rulebooks and figure out what ability that was… I’m just going to punt and wait for next week.

First, I’m going to admit I felt like the whole exchange when Hap and Ateran were strategizing about how to use their actions was pushing up against metagaming just a little bit. Yes, they would know Darius is in bad shape and can’t take much more of a pounding, but when you get into “he has Dying 3 and doesn’t have a Hero Point”… that’s not something the characters would really know. But at some point, particularly when a character’s very life is on the line, I think you give the players wiggle room on stuff like that.

One thing I find fascinating to speculate about is what would’ve happened if Darius hadn’t critted and dropped the second demon. If I’m remembering the turn order correctly, Ateran and Hap had just gone, so it would’ve been the demon’s turn next. And since Darius had already been at Dying 3 and didn’t have another Hero Point, dropping again really would be the end of the line. So the reality of the situation is that even with the surprise revelation of his mark, the crit may have ended up saving Darius from death.

The other thing I wonder: the rage took the decision out of his hands, but what would Rob have chosen to do if he wasn’t enraged? Would he still have charged Darius into the fray, knowing the next hit would be certain death? Would he let the demon beat on the squishy casters for a round so he could try to sneak in some healing? As cool as the reveal of the mark was, it would’ve been equally dramatic to put that decision directly on Rob’s plate and see what he did with it. On a roleplay level, I feel like Darius would’ve gone down fighting – he’s always kind of been the protector of the group, so why stop now?

For that matter, it’s interesting to speculate whether Steve would have gone for the jugular in that situation. I feel like if you look at the situation logically, Darius did the most damage to the demon, and therefore represented the biggest remaining threat, and maybe demons have enough intelligence to recognize the value of finishing an opponent off. Would Steve have done so, or would he have found a reason to do something different?

But fortunately, Darius’ newfound powers and a timely crit are enough to put the second demon down, and the party lives to fight another day. But they’re definitely going to need a long rest after this one. There’s still a few rooms left so I don’t know if they’ll go all the way back to town or just find somewhere safe to hole up, but there’s going to be some wounds to lick after this one.

As I mentioned earlier, it sounds like next week’s episode will sort through and provide some clarity on all of this, so I’m going to leave it here for now and we’ll pick it up there. As always, feel free to drop by our Discord server or other social media and let us know what you think of the show. Thanks for listening, and we’ll see you next week.