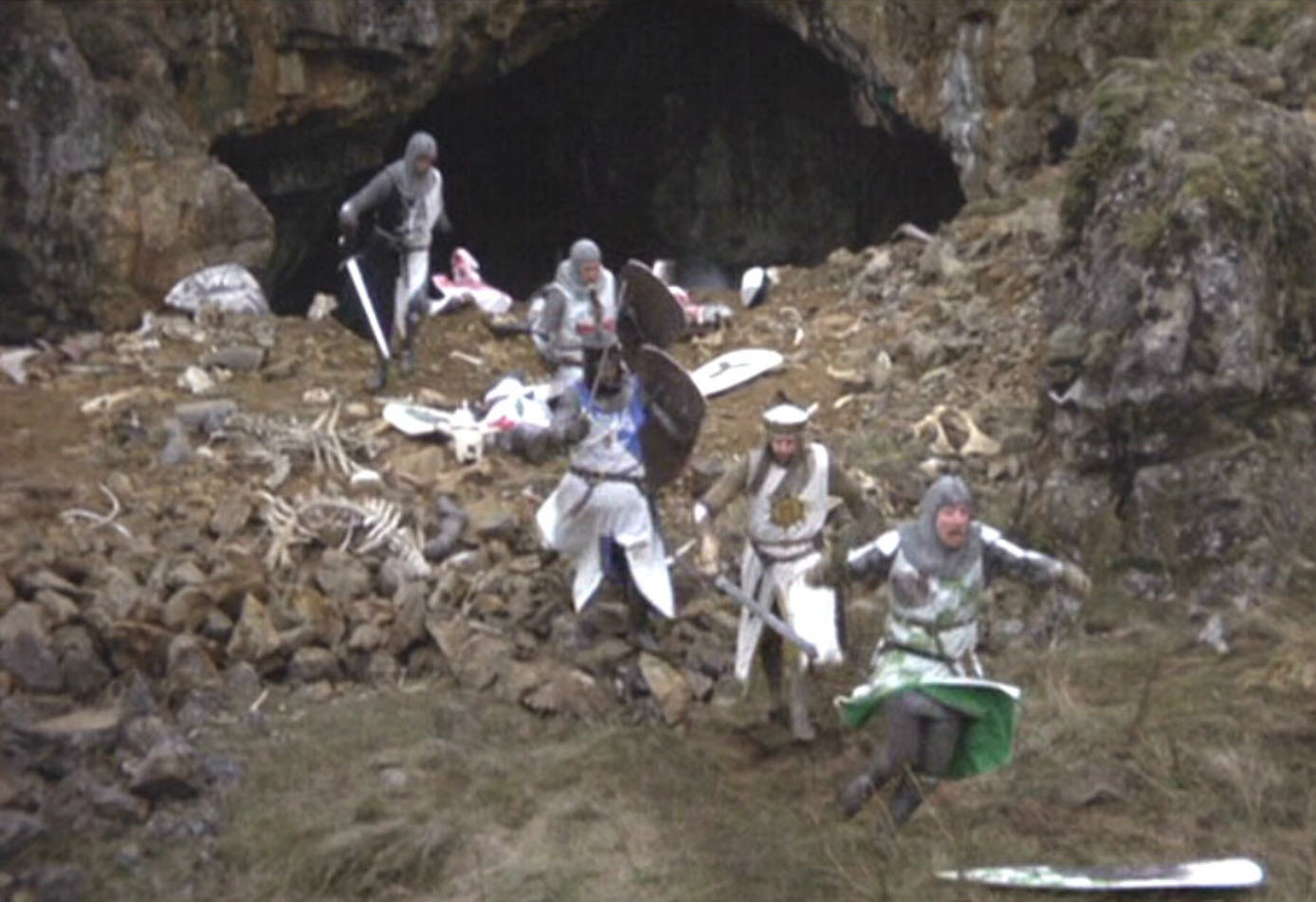 On the surface, this week’s episode is a bit awkward. After all, we have a rich and long-standing tradition of making fun of Chris Beemer’s cowardice, and this week… we pretty much all turned tail and ran from the one creature Dannicus forgot to mention in his otherwise thorough briefing.

Of course, it’s not necessarily an apples-to-apples comparison. When Chris gets his worst bouts of teasing, it’s usually those cases when he starts retreating even before the monster’s thrown a punch. AT LEAST TAKE A HIT OR TWO! On the other hand, when the monster hits you with a 40-something and crits for two-thirds of your hit points in one shot… well, then you’ve got some legitimate empirical evidence that maybe we shouldn’t be fighting this creature right now. That’s like… the scientific method at work.

(That’s pretty much “hits on everything except a natural 1” territory, and even a crit is “only” in the 12-14 range depending on which of us it’s targeting. Yeah… this thing’s bad news.)

It reaches the point where this Tyrroicese thing (not sure if that’s a proper name, or the creature type) feels like it’s SO far above our pay-grade that you start to metagame WHY it’s so impossible… that either the person writing the adventure made a SERIOUS mistake in encounter design, or there’s some sort of “trick” involved. Maybe the key to defeating it is somewhere else in the dungeon, or that when you defeat the person who summoned it, it disappears. Maybe it’s not meant to be fought; maybe its function is more like traffic control and it’s just here to steer the party down one of the other paths to the cultist lair.

On the opposite side of the ledger, the fact that it’s absorbed one of the Graycloaks DOES suggest it has to be dealt with eventually. That’s LITERALLY on our list of side quests, and it doesn’t feel like a satisfying resolution to go tell Runewolf “yeah, your captain is trapped in some nasty eldritch thing, sucks to be them, can I have my money?”. So maybe the real message here is that we avoid it for now and come back when we’re higher level. After all, there are still two or three other ways to get into the cultist lair, including the entrance we discovered all the way back in the first episode.

And ohbytheway, on top of the fact that it can knock us into next week, it’s got ridiculous reach and can summon more oozes. Lovely. And yet… that was almost a bit motivational: it accidentally gave us a window into how far we’ve grown as party. Remember when Hendrid Pratchett’s ochre jelly was something to be avoided at all costs? And now we’re taking them down fairly efficiently, even with Dougie briefly getting enveloped. We really ARE getting the hang of this thing, aren’t we?

I realize I’m dealing with things out of order here, but our cowardly retreat did kinda seem like the big moment of the episode, so I figured I’d tackle it first.

Meanwhile, we do have other things going in this episode… that wounding rune went on an interesting ride before finally ending up on Basil’s increasingly epic sword-cane. If you remember, at the end of the last episode, we’d pretty much decided Dougie was going to get the rune. But for whatever reason, he didn’t want it… not sure I understand the logic there, but whatever. I was quite willing to give it to Lo Mang, but handwraps do blunt damage and a wounding rune requires piercing or slashing. So then I thought I’d put it on my bow, but while reading up on it a little further, I noticed it has to be put on a MELEE weapon. So… OK… bleed damage for Basil! (And yes, I’m going to be AGGRESSIVELY on the lookout for a chance to stack bleed and poison on the same target.)

One unintended side effect of ending up with the rune is that it made me feel just a little guilty around the edges, because between that, the chain shirt, and the fireball necklace, it was one of those days where the loot felt a little lopsided in my favor. Logically, I know things even out over the long haul, but in the short term, I always feel like there’s a “HEY LOOK AT THIS GREEDY M.F.er” sign turned on over my head.

Regarding Dannicus’ briefing, I already covered the level of detail… it really is almost like having a cheat code. I specifically wanted to reflect on a couple of the underlings he mentioned. (We know the bosses are gonna suck.)

Now… I don’t know if it was fighting the skinstichers in the bank numbed me, or if I’m just dense, but somehow I didn’t find the golem to be THAT intimidating. (And yes, I realize the golem and the skinstitchers aren’t EXACTLY the same thing, but there are some similarities.) I think knowledge is the key with golems: if you run into one blind and don’t know what magic to use, golems can be a pain because they’re vulnerable to ONE type of damage and ignore anything else. (And golems are even healed by the wrong magic.) But if you know what you need in advance, it’s not SO bad. In this case, both Gomez and I have fire attacks in our arsenal, and we can always go buy more.

Now those ceustodaemons on the other hand… THOSE sound like a formidable challenge. I already assume they’re generally tough and hit hard. But it’s the special abilities that sound truly daunting. The dimension door innate power is gonna make it really hard to control the battlefield – setting up flanking, keeping the backline (well… Gomez) safe. And breath weapon equals area damage, which means you have to be more careful about engaging and leave yourself room to spread out. And I’m not sure what to make about the super-special wounds that require extra healing. (And for the moment I’m not going to look it up… feels like cheating.)

So jumping forward back in the present, we beat the ochre jelly, we retreat to lick our wounds (OK, mostly Lo Mang and Dougie’s wounds) and bruised egos, and I guess we’re going to use one of the safer paths down into the dungeon next week. You know… like we probably should’ve done all along. As always, feel free to drop by our Discord channel or other social media and let us know what you think of the show. Thanks for listening and we’ll see you next week.