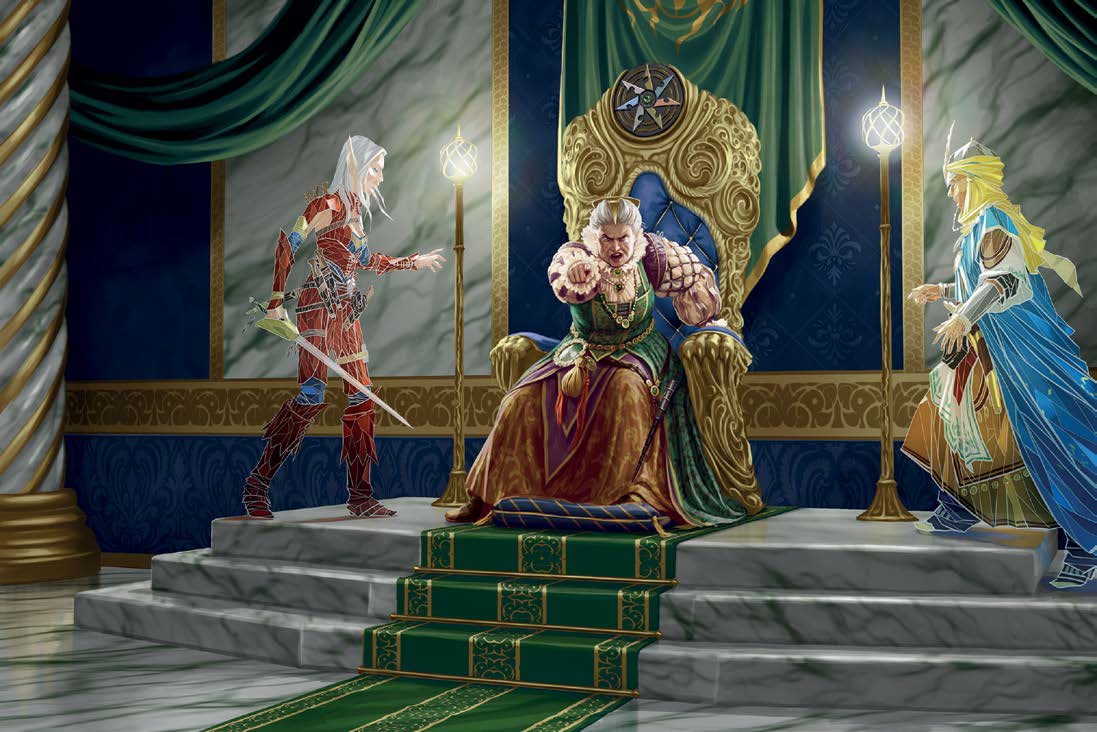 Jason recaps the events from The Black Lodge Tale 2, Chapter 1: Hey You Guys!

Welcome to Episode 5, where the Black Lodge premise finally finds its legs. Dead Suns, Plaguestone, Three-Ring Adventure? Lots of fun, but adventures that take months, if not years, to reach their payoff. Here in the world of Pathfinder Society, everything’s brand new again! New story, a new guest star, and another fairly short romp with the finish line already in sight. So let’s get into it.

First things first, we bid farewell (for now) to Vanessa Hoskins, the player, and Mama Millicent, the character. This time around, it’ll be fellow Three-Ring Adventure player and long-time friend of the show Rob Trimarco joining us as dwarven fighter Thorodin Bloodhammer. It’s an amusing choice on multiple levels. First, there’s something amusing about the fact that Vanessa and Rob both went with fighters – guess people are really starting to miss their attacks of opportunity in Second Edition. There’s also going to be some superficial amusement to be had from both Chris and Rob running dwarves with similar-sounding names. I’m sure that won’t get confusing at all.

The setup of this mission seems fairly simple at first glance – we’ve got a merchant of questionable nature (Guaril Karela) who made contracts to smuggle several citizens out of the city of Xin-Edasseril. Now, he’s become too hot to get into town and can no longer fulfill his deals, but the Pathfinder Society volunteered us up to finish his job for him. Presumably, the hook for the Society lies in the fact that Xin-Edasseril was frozen in time for thousands of years and just got thawed out, so its citizens represent a walking, talking history book. Karela has already arranged a boat to take five people out. So at first glance, this shouldn’t be that tough, right?

But things get immediately more complicated. Yes, the list is five names – Flitch (a thief of questionable talents), Themolin (a government accountant who found some questionable book-keeping), Yuleg (an innkeeper), Daffrid (sounds like a teacher of magic), and a city guard named Garrla. However, the innkeeper and teacher come with family attachments: Yuleg has a daughter and Daffrid has both a husband and kids. So now we’re up to nine people we’ve got to get out of town – more than will fit on the boat. And also, reading between the lines, Garrla is kind of a question mark, as Flitch put that deal together on the side based on an anonymous note left in a dead-drop. I can’t be the only one who sees “mediocre thief” and “city guard” and is at least a LITTLE worried someone’s onto Karela or Flitch and setting us up.

We also have more of a meta-problem, in the form of Steve telling us in multiple ways that getting into a fight against the city guard is going to be a BAD idea. We have multiple “if you fight the guards, you WILL lose” warnings. This is one of those “know your GM” moments – there are subtle hints, and there’s the GM telling you flat-out what the rules of engagement are. This is the latter – if we go swords-out against the guards, we lose. That doesn’t mean there’s going to be no combat at all – we may still have monsters or bandits or something – but it does mean that we need to play this smart.

What came next, I have to admit was a little frustrating… both as a player and going back to listen later, as we got hopelessly bogged down in pre-game paralysis by analysis. On one side, we had Seth (in particular) going meta and trying to walk through every possible outcome in advance. Who is this NPC? What are the 18 different things that could go wrong with their extraction? I understand a little bit of advance planning, but it reached a point where… come on, let’s just go there and see what the situation looks like. On the other hand, John… either he just wasn’t getting it, or he was impatient to get moving and just tuned out, or… something… because he seemed to be misunderstanding the basic points of the plan. THE BOAT HOLDS FIVE PEOPLE, JOHN.

But as long as we did all of that, what did we determine? The two biggest challenges here are likely to be the guard and the accountant – they’re people that are part of the infrastructure, people the guards would likely recognize if they went walking through the gates. “High-value targets”, so to speak. On the other hand, the fact that they’re part of the infrastructure means they might represent part of the solution, too – maybe they can find us extra papers or talk to other guards or know who to bribe or something. Being connected is a double-edged sword here. The families are low-value targets, but if we’re talking about getting actual children out, they’ll need an “easy” departure – can’t have them swim out to the boat or anything like overly physical. The thief is a question mark – he might also have skills but our benefactor seems unimpressed by his skills, so don’t know if we want to rely too heavily on him.

An hour later (real-time, not game time) we FINALLY get off the boat and get things started. We decide that Flitch seems to be the best starting point because he’s the guy who was in most direct contact with Karela – maybe he’s been working on the escape plan – but there’s basically nobody home at the address we were given. The flowerpot that was used as the message drop by Garrla is knocked over… that’s a little ominous… and then Peepers finds some graffiti that we can’t decipher because nobody bothered to train in Society. Chris decides to break that stalemate by busting the door down – just what you want to do on your first day as a visitor in a police state! Once inside, we find more graffiti – at first, we can’t decipher that either, but Thorodin eventually figures out that Flitch has gone into hiding into the sewers.

And that’s basically where we’ll pick it up next week. (Sewers again? Is this going to be a recurring theme for this show? Tales Of Municipal Waste Systems?) Hopefully next week we can get past the endless planning stage and actually do some townspeople-rescuing. While you’re waiting, feel free to drop by social media and let us know what you think of the show and join in the ongoing merriment. Thanks for listening and we’ll see you next week.