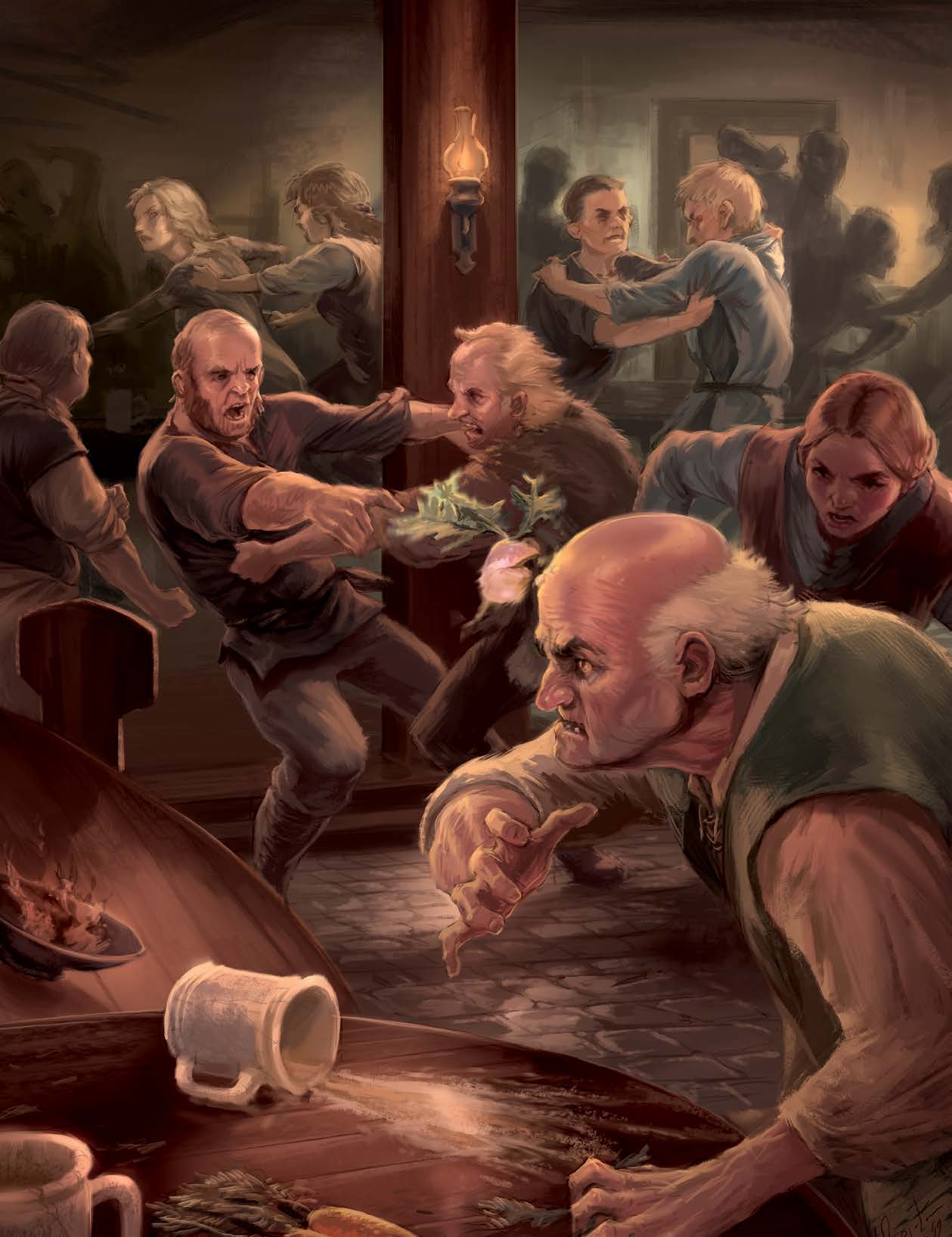 Jason recaps the events from Roll For Combat: The Fall of Plaguestone, Episode 02: Barroom Blitz.

So much for a nice relaxing night at the Turnip-Town Inn, I guess. A bar brawl, a murder mystery… a little bit of everything.

I have to admit I didn’t plan on taking such a… well… boozy, take on Brixley when we started this thing. On one hand, he is a follower of Cayden Cailean, so I suppose it makes a certain amount of sense. The trick is to not turn him into too much of a “drunken dwarf” trope. I’ll have to play around with it a little and find a way to give him some shades of something else; in the meantime, at least for this session, we had someone who was both a heavier drinker and an actual dwarf to make Brixley look normal by comparison. That’s one way to do it, I suppose.

I’m also caught in a little bit of a bind because Champion is somewhat of a Charisma-based class, which lends itself to “face of the party” things, but it’s not my natural role as a player. I’m usually good leaving that to someone else. (In our longer-running gaming group, Bob tends to gravitate toward those types of characters a lot.) In particular, I’m going to feel a little bit silly when 3-foot-tall Brixley will be forced to try and Intimidate someone who’s multiple feet taller than himself.

Which is not to say I wasn’t about to give it a try with Hallod, the bully who was hassling the waiter. Among other things, I think it came down to and highlighted the difference between, the paladin and liberator champion variants. If I was playing a classic lawful good paladin, I probably would’ve gone ahead and called Hallod on his behavior, maybe even fought him. That absolutely seems like the lawful good thing to do. On the other hand, chaotic good feels like it can be a little more lackadaisical about stuff like that – yeah, Hallod was being kind of a jerk, but short of physical abuse, it’s up to the bar to decide what to do about an unruly customer. For all I know, maybe they pay the waiter extra to put up with stuff like that. Hallod’s free to be his authentic self, even if his authentic self is an asshole.

Also, the waiter is a goblin. Both as a mild roleplay thing and as an out-of-character sensibility, I’m not quite ready to get my ass kicked on behalf of a goblin. Still not sold on letting them be good guys.

Shortly thereafter we had the bar brawl break out, and I thought having Brixley try to play peacemaker felt like the right call. My initial knee-jerk reaction was to jump in on the waiter’s side, but somehow it didn’t seem wise to wade in as an outsider and start punching people on our first night in town. You never know who might be the mayor’s son or – at a meta-game level – might be the NPC you need to talk to later when he sobers up. Also, more as a roleplay thing, Brixley was still tired from falling in the mud, so it didn’t seem like he’d really want to be aggressive in his involvement. So I decided to tie up the drunk guy and got a punch in the face for my troubles. Yay!

Overall, the fight was a fun interlude. Since it was non-lethal damage, the stakes were pretty low, and there was some fun stuff going on – Cade trying to pick people’s pockets while they were fighting, Prue trying to flip the table only to find it bolted to the floor… all we were really missing was the stereotypical Hollywood bar-fight “drunk who is mysteriously adept at keeping his drink safe while the bar gets trashed all around him”. OK, the creepy drunk guy was a little uncomfortable for a second, but Prue took care of that pretty handily.

I do wonder if that fight was supposed to run a little longer and was condensed for time, though. Going back and doing the math, the owner (I forget her name) left to get the town constable and they came back, like… two rounds later. So apparently it takes 12 seconds to go halfway across town and get the law. Burying the lede: Plaguestone is clearly a town of people who have mastered teleportation! I think in my personal head-canon, maybe this happens so often he hangs around outside and waits for the sounds of brawling to make his entrance. (Or we can just return to Occam’s Razor and assume Steve trimmed it for time, so we would hit the cliffhanger at the end of the episode. In which case… good for him. GM’ing is ultimately storytelling, and ending on a murder serves the story better than 15 minutes of Punching Drunks For Fun And Profit.)

Speaking of the cliff-hanger… I have to admit Steve sold that death pretty well. Even though I made an unintentionally accurate joke about the porridge being poisoned, I fully admit I was fooled in the moment and the joke was just that. When Steve first started coughing, I really thought he just got some water down the wrong pipe or something. So… good sell there. Going back and listening again, The Right Thing To Do was probably burn my Lay On Hands just to see if it would help, but (putting on the meta-game hat) I don’t think LoH would really work against poison, and at a story level, I’m pretty sure the murder is what’s going to drive action, so it pretty much had to go that way.

I’ll end with two more big-picture notes about the show that stood out for me.

First, the lack of intro and outro is a little… weird. Not bad weird, maybe even good weird. But after almost two years of listening to Steve set the episode up and do his song-and-dance after, it’s a little bit of an adjustment to not hear those things.

The other… I have to admit when I went back and listened, I felt a little self-conscious about the couple times I cracked jokes, particularly the two pop-culture references (both Monty Python, oddly enough). I’m still figuring out the balance between “this is my game too, I’m gonna be me and play how I like to play” and “we’ve got people at this table who want to take roleplaying a little more seriously, so I’ll try to try and rise to meet that standard”. Maybe not all the way – I still don’t do voices – but possibly toning down my usual silliness just a touch. (Which is also not to suggest anyone else LACKS humor – everyone’s pretty funny when we’re BSing before the show; some people are just more locked in once the virtual camera starts rolling.)

That’s all I have for this week. Next week, we’ve got a dead dwarf at our table, and we gotta figure out who or what might have killed him. We’ve got the weapon (porridge) and the location (tavern), we just have to figure who Colonel Mustard and Miss Scarlet of this town are. Thanks for listening and we’ll see you back here next week.