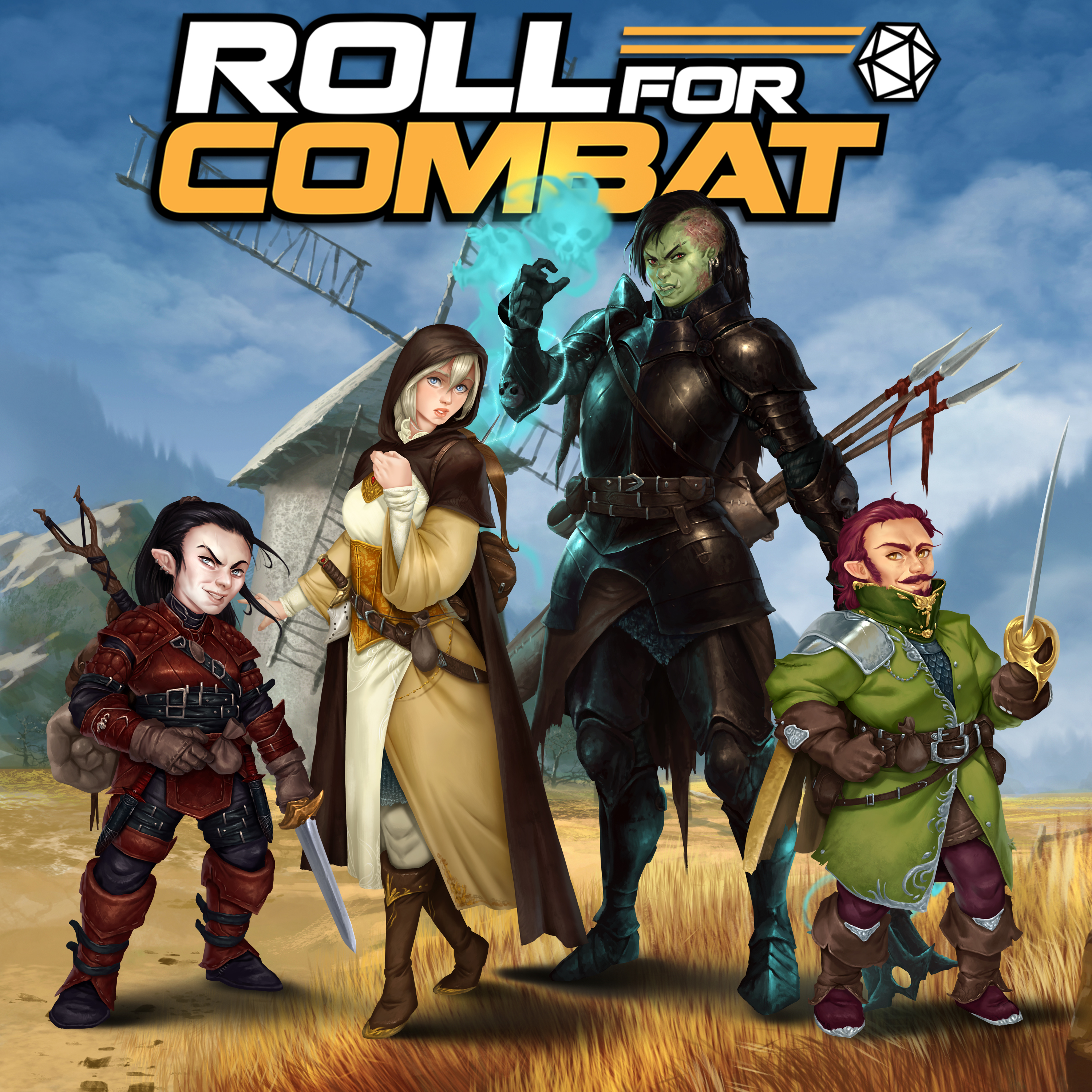 Jason recaps the events from Roll For Combat: The Fall of Plaguestone, Episode 01: Fleas to Meet You.

Out of the shadows, the morning is breaking, and all is new… all is new…

Welcome to the first episode of Roll For Combat’s Pathfinder Second Edition (informally, PF2… less typing) actual play podcast. We’ve got a new game system to try out. We’ve got a mostly-new cast, except for myself and Steve. We’ve got a new adventure, The Fall of Plaguestone, to put to the test. It’s an exciting time here at the RFC Mothership.

Starting with myself and working outwards, let me talk about Brixley a little bit. The initial choice of playing a champion was mostly a result of what I WASN’T doing in my other two games. Over in our Starfinder game, I’m playing a Mechanic – if you’re not familiar with Starfinder, a Mechanic is a skills monkey character who’s not very good in combat (but makes up for it by having a drone that can take up some of the slack). In my Dads-n-Kids game, I play in the outside world, I’m playing a 5E Warlock, so I just sit back and Eldritch Blast things until they stop moving. So I wanted to get up front and hit stuff this time around, but I also wanted to play around with some sort of magic or additional powers as well. I considered playing a Monk, but those tend to be a little squishy at low levels and we’re learning a new system, so I figured sword-and-board would be a safer choice. Hence, Champion.

If there were a family portrait of the Pathfinder classes, Champions now sit in the chair that Paladins used to occupy in First Edition. Paladins still exist as the lawful good variant of Champions, while neutral good Champions are “Redeemers” and chaotic good Champions are “Liberators”. Brixley is a Liberator – more of a roleplaying choice; I didn’t want to play a lawful good square, and I wasn’t getting a good feel for what a Redeemer is all about. It almost felt like the Guilt-Trip Champion – I’m going to make you feel bad for your evil acts. As opposed to a Paladin, who flat-out kills you for your evil acts.

A Liberator is more “I’m going to fight for the downtrodden to live life as they please”. As Messrs. Diamond, Yauch, and Horovitz more succinctly put it: Brixley fights for your right to party.

I don’t have a strong lock on his characterization yet. Some of the ideas that I’m playing around with are that he was formerly of noble birth, but his family had their lands and titles stripped away as part of a treaty between two larger powers. So he takes a dim view on the idea that “law” and “justice” are the same thing. On the other hand, he’s got kind of a romanticized attitude toward going out and doing good deeds, almost a little foppish. Jaded on one front, naïve on the other. Odd needle to thread, but let’s go with it. And as a follower of Cayden Cailean, he’s not one to say no to a drink or three. I’ll figure out the rest as I go.

Now, a word about my cast-mates.

Rob Trimarco (Cade) is the person I’m most familiar with. He’s been an occasional guest-star (usually in a two-man Voltron with Jason Keeley) on the Dead Suns podcast, I also got a chance to game with him in person at PaizoCon last year, and on a couple occasions, he’s just dropped by the Discord channel to B.S. Good people.

Loren Sieg (Prue) was actually a special guest for one of our Starfinder Society one-shots, but I have to admit I don’t remember the episode that well. Not a reflection on Loren… the whole damn episode is a blur. I know it happened, but I can’t tell you much more than that. In fairness, I think this was right around PaizoCon last year and we were starting to get material on the Pathfinder Playtest, so things were a little bit crazy in general.

Vanessa Hoskins (Celes)… first time gaming with her. Having said that, if you’re familiar with the Starfinder side of our house, she comes in with pre-existing approval for naming her Grimmerspace character Harriet A. Mayo and calling her drone the Synthetic Wondrous Intelligent Soldier (SWIS). As a fellow lover of cheese-related puns, I approve.

I will admit that as we get started, I was a little thrown by the depth of Vanessa’s roleplaying in particular. (Loren’s to a lesser extent – she’s in character, but the voice on Prue is only a mild turn of the dial from Loren’s normal voice, so it’s easier to adapt.) I’m not opposed to roleplaying and I’ll try my best, but I’ll also admit it’s not my strong suit. I tend to come up with a good mental sketch of who I think my character is and I try to act consistently with that image, but I’m not great with voices. I can do an OK Sean Connery, a Ross Perot (which hasn’t been useful in 20+ years), and that’s about it. Neither of those will help with Brixley.

Fortunately, though, combat bails me out for now, as we’re immediately set upon by wolves. Rather than go blow-by-blow, I’ll point out a few things that stood out to me about our first combat.

First, as Celes demonstrated, the new three-action system ends up being quite flexible for casters, as we can see when she was able to fire off two spells in the same turn. If you haven’t had a chance to read the PF2 rules yet, some spells can have different effects depending on how many actions you put into them. That means that yes, some spells are usable with a single action and yes, you can sometimes get multiple spells off in a single round.

Speaking of the action economy, in one of my turns, Brixley takes an action to raise his shield. In PF2, a shield is no longer an abstract plus, it’s an active defense measure. The bad news is you don’t even get to count it as part of your armor class unless you raise it. The good news is that if you do, you not only get the AC bonus, but the shield can take the damage even if you DO get hit, so it’s a bit of a two-fer. The flip side of THAT trade-off is that shields do eventually wear out… that’ll be something we’ll have to keep an eye on as we play – how often do they wear out and how easy is it to find replacements.

Another thing I was glad we got to see (when Rob and I saved against acid) was the… we’ll say “refinement”… of the rules for critical rolls. In PF2, rolling a natural 20 is no longer an automatic crit. The automatic crit is exceeding the needed role by 10 or more. If you roll a Nat-20, your success goes up by one step. So it’s true that in a LOT of cases, a 20 will raise you from “success” to “critical success” anyway. But not always; if a Nat-20 would normally be a miss, it raises it from “fail” to “succeed”. I think this will become more important at higher levels when success requires numbers greater than a Nat-20… right now when a Nat-20 is a success anyway, it’s a trivial distinction.

(All of the above also applies in reverse to critical fails, only it’s Nat-1s and missing the result by 10 or more.)

The one interesting “force of habit” thing I noticed was that Rob and I were still moving as if attacks of opportunity were still a more common thing. It may be hard to envision without the map in front of you, but as we were approaching the one wolf, we both kind of took the roundabout diagonal paths you usually associate with avoiding attacks of opportunity. Prue, on the other hand, seemed much more in tune with the new program and charged right in. Old habits die hard… we’ll get there.

So we take care of the wolves and finish our fight, and as a low-key humiliating coda, Brixley Nat-1’s the roll to help move the wagon and takes a tumble in the mud. It’s probably far too early to be taking a Hero Point on that, right? (You get one Hero Point each session – they can be used to re-roll a single roll or stabilize from dying.) But Celes has a cleaning cantrip available, so no harm done, beyond Brixley being a bit tired for the rest of the day. But that shouldn’t matter because we won’t get in any more trouble the rest of the day, right?

OR WILL WE?!?!? (cue arched eyebrow, ominous music)

I guess you’ll just have to come back next week and find out. Though keep in mind, we’re still figuring out which day each show is going to run, so… “true for sufficiently large values of ‘week’” as the mathematicians might say. We’ll see you next week, in the meantime, feel free to drop by our Discord channel or other social media and let us know what you think of the new show. Thanks for listening!