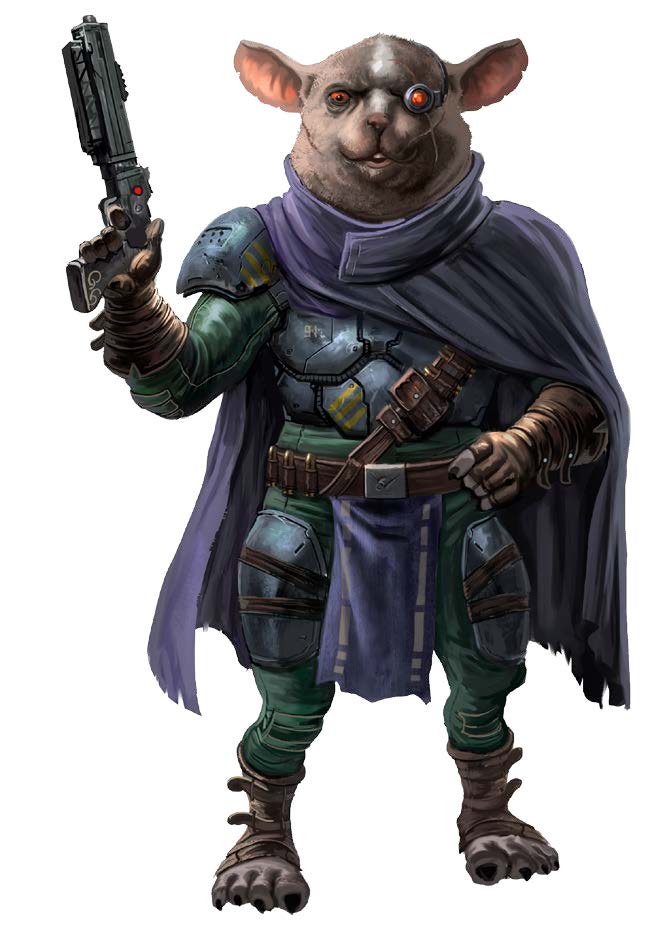 Jason recaps the events from Roll For Combat, Episode 005: And A Side Order of Rat.

I’ll start this week once again tackling something Steve mentioned in his pre-game remarks. What style of low-level opening do I tend to prefer?

I think if I’m given a choice, I actually like the “choose among mini-tasks” model. I think the thing that’s appealing is the player has a choice (sometimes it might be an illusion of choice, but it works). If you’re given three gigs, you can make a decision about which level of immersion you want to pursue – jump right into something that sounds like it’s going to lead directly to combat, pick the path that might require soft skills, etc.? Also, depending on how the tasks are structured, there may be opportunities to turn aside and try a different task if you get stuck; whereas with the mystery model, in particular, there tends to be one critical path, and if you get stuck, it can get really frustrating.

I will say the one thing I look for regardless of the model is to get at least one combat session out of the way early. I suppose part of it is good old-fashioned impatience (FIIIIIIINE, I’ll admit it, I want to hit stuff), but there’s also a tactical benefit as well. At the end of the day, combat is still the core game mechanism that ties a lot of the other stuff together, so I like to get a feel for that as soon as possible. This is both for my character as an individual (did I choose the right skills, weapons, etc.) and to see how the group fits together as a whole. You can draw it up on paper however you want, but seeing the pieces fit together in practice is another matter entirely. I suppose that goes double for a situation like this where Starfinder is so new to us and has its own little quirks Pathfinder didn’t have.

Anyhow… let’s get back to the action. We begin our session at Mama Fats’ and her extensive menu of potential copyright infringements. I recognized most of the references on that menu (particular shout-out to the Pan-Galactic Gargle Blaster) but I’ll confess there were a few I had to Google later. Slusho, in particular, went over my head. My apologies to J.J. Abrams. On the other hand, it’s good to know Lt. Worf has a place to eat gagh and drink prune juice if he ever slips into our corner of the multiverse.

I have to admit I got a bit of a thrill actually correcting Bob about something. Bob tends to be our group’s unofficial note-taker while I – both in-game and in real life – tend to rely on memory to bail me out on stuff. So he’s usually the one reminding me of things I forgot. [For the record, we never took a vote or formally appointed him; I suspect we just outlasted him over the years and he probably just got exasperated with the rest of us NOT taking notes.] So when Bob got his gang leaders wrong, I was pleased to swoop in for the recovery. Or maybe it’s just because my kids have reached the age where they’re merciless when I forget something, so I have to pay that forward. Who knows?

Mama Fats’ goes mostly as expected. OK, maybe not Bob and Steve flirting with each other in character, but OTHER than that…. I thought maybe there would be a fight, or maybe there would be a different intermediary (the delivery guy as courier, a customer?), but the “membership card” we found in Kreel’s underwear drawer buys us a meeting with Jabaxa; that in turn earns us a Big Trouble In Little China reference (never a bad thing) and a pointer back to the Fusion Queen nightclub. I guess we have a date with Ferani. If you can call participating in gangland murder a “date”.

Remember that “illusion of choice” I talked about earlier? I felt like there was a little bit of that at play here. When we first hacked the datapad, it felt like there were four different paths to pursue. There was the corporate angle: maybe pose as miners or investors and try to gather some information from Astral Extractions. There was the option to investigate the ship in quarantine – and I feel like we may yet end up there. Then there were the two gangs, which seemed like a more logical way to get started since we’d already sort of established ourselves as on the same general side as the Level 21 Crew. But it feels like whichever path we took was going to ultimately point back to a reckoning with the Downside Kings.

And that’s not a criticism. It’s an adventure path, so of course, it’s going to have an underlying structure and sometimes you’ll hit a point where all roads lead to Rome. The price you pay for a coherent plot that hangs together over six individual adventures is that sometimes you’re playing on rails a little. I think the important thing is “currents, not strings” – you want to feel like the plot is a current carrying you along, but still have freedom of movement within, rather than something that’s overtly pulling you and controlling your actions. And I felt like the story, and Steve’s implementation of it stayed on the right side of things.

So we show up at the club and we have a bit of a two-fold dilemma.

First, we don’t even know for sure that Ferani is there, and that doesn’t seem like the sort of information you just go ask the bartender. “Hey, we’re TOTAL STRANGERS HERE TO SEE THE LEADER OF A MURDEROUS GANG!” (Cue music stopping, sound of safeties being removed from a dozen pistols aimed at our heads). But I figure between Hirogi’s stealth and Rusty’s people skills, we have some tools for dealing with that. Or heck, maybe Tuttle can hack the bar computers and see if Ferani’s been ordering bottle service. Besides, if this club is their central base of operations, the Plan of Last Resort is probably just to rush it and pray she’s there (or that attacking her club might bring her there – we do live in a world of communicators and telepathy, for better and worse).

Second, and slightly more problematic, we’ve got a weapons check at the door – the Old West “walking around fully strapped” vibe does have its limits, especially given Jabaxa’s instructions to keep the breakage to a minimum. The beauty of dungeon crawls is that you don’t have to worry about collateral damage and separating bad guys from good guys. And you rarely get asked to give up your weapons unless something went really wrong. If it’s orcs and skeletons manning the doors, you can pretty much just start swinging and let the bodies fall where they will. Here, we probably don’t want to become fugitives and besmirch the name of the Starfinder Society (killing civilians is bad, mkaaaaaaay?), so I guess we’ll need to use a bit more of a deft touch. But that’ll be a question for next time…

So what do you guys think? Frontal assault? Have Rusty schmooze the bouncers? Maybe Tuttle can build some sort of Trojan horse out of loose scrap. Feel free to drop us a line and offer your suggestions, or your thoughts on anything else that’s been going on. As always, thanks for listening!