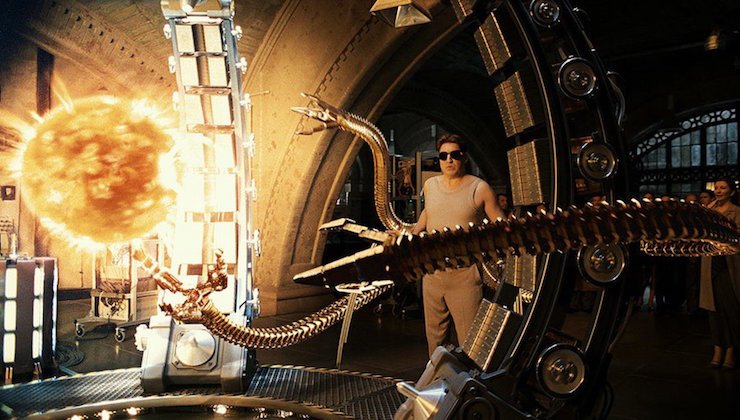 Jason recaps the events from Roll For Combat, Episode 086: Always Be Killing.

Last week I was lamenting the uncertainty about whether we were facing a boss or a sub-boss. No such ambiguity this week – it’s definitely time for The Big Bad! He glows, he has a little bit of a speech, and he brought a few plus-ones with him. (Were there two or three? I honestly can’t remember.)

On a meta-gaming/tactical level, I’m kind of regretting we dove right into this fight. I don’t track Chris’ spells but sounds like he’s running low, I have no CHDRR… it’s going to be dicey. But at some point, you have to charge in because that’s what the story demands. Doing it the other way just wouldn’t feel heroic. “Well, we know that the destination we seek is right behind that door, we also know we’re on a clock to the extinction of all life in the universe, but let’s go back to town and take a nap so Akiro can get another cast of Magic Missile!”

At least early on, it’s pretty apparent I should be concentrating on the cannon fodder. The first, and simplest, reason is that the boss is up on a raised catwalk that goes around the perimeter of the room and might also create partial cover. Yes, I can climb up there if I have to, but without CHDRR to protect me, it seems like hazardous duty for a fairly squishy fellow like myself.

The second reason is that as the combat unfolds, it becomes apparent that the underlings are the only ones I’m going to be able to reliably hit. Sorry to meta-game, but the early rolls are suggesting the boss’ EAC to-hit is somewhere in the 29-31 range, so if Rusty doesn’t land his Get ‘Em, I’m basically crit-farming, and even if he does, I’m still down around a 15 or 20 percent chance. (And that’s even before we get into any resistances he might have). So… might as well focus on the trash early on.

The other thing we have to deal with is the boss’ Solarian powers. Solarian was ALMOST my choice when we first started playing this campaign, and I’ve played one in our Society games, so… I’m familiar with the concept, though I haven’t gotten to play it at higher levels yet. (Remember Nala? Pepperidge Farms remembers.)  My general recollection is that the light-side powers are more about direct damage whereas the dark-side powers are more about buffs and debuffs, often related to movement. I know for certain there’s an AoE you get at level 1 which ramps up in power, and at some later level, you get more of an ongoing aura effect. It’s also dawning on me that if he has a conventional off-the-rack weapon, that implies he’s going with the Solarian Armor, which also explains why he’s so hard to hit.

If the Solarian has any sort of weakness, it’s that it’s very oriented toward close combat. Most of the Solarian powers emanate outward from the self – they can’t really project down-range. So that argues in favor of keeping him at distance, spreading out so he can’t really hit more than one or two of us at a time. I don’t know how that’s going to help Mo, who is most effective at melee range, but we’ll figure that out as we go. But it’s another good reason to dispense with the minions – we need to clear the dance floor for maximum mobility.

I’d also add – more toward Steve’s general thoughts about the class being overpowered – that another balancing thing about Solarians is that they’re low-key stat-heavy, like the Monk was in Pathfinder. Your class powers run on Charisma, so that ends up being your main score, but being a melee means Strength, Constitution, and even Dexterity all have their various uses. At least you get to be stupid, though? Contrast that with… well… Mechanic, where Tuttle basically just has to stand there and be smart.

I also feel like at least the dark-side powers are fairly situational. Everybody loves a good AoE, but a lot of the dark-side powers are things like “take less falling damage” or “a bonus to resist bull rushes”. And that three-round ramp-up isn’t nothing… let’s say you’re charging that AoE for two rounds and then the battlefield shifts and there’s only one guy left in range. Do you blow the AoE on one guy? Do you hold it and try to get into position for something better?

On the other hand, it is VERY nice that you never run out of stuff to do. That was even evident playing Level 1 Nala in our Society game (Half-Alive Streets) – our Mystic was running out of spells, we either didn’t have any grenades or ran out of them, but I could still pop an AoE every three rounds.

OK, so somehow this turned into a Solarian rant. Not really complaining – the battle hasn’t fully developed yet – but that wasn’t what I expected when I first sat down to write this. In summary: they’re a pain in the ass, but maybe not as OP as Steve is suggesting. Check back with me when this guy starts kicking our ass in earnest.

PaizoCon… looks and sounds like you guys had a great time. I mentioned this in Discord, but I’m proud that Vanessa (our contest winner) busted out a cheese pun for the Grimmerspace game. I think *sniff* it’s getting a little dusty in here. DAMN ALLERGIES! I think the thing that intrigues me most is how Pathfinder 2 is shaping up. We’re certainly committed to finishing Dead Suns, but if we have a chance to get back to swords-and-sorcery at some point, that wouldn’t be the worst thing in the world.

Speaking of which, my last thought for this week has nothing to do with the show itself: I’m going to be getting back to an actual physical game table for the first time in a while, as a modified version of my local dads-n-kids game is starting back up after extended hiatus. It’s going to be a few more adults, but one or two of the young’ns who stayed interested will be playing as well. I’ve enjoyed this show tremendously, but nothing compares to breaking out the dice bag and sitting down at a real table. 5E, Level 1 characters, but… it’ll still be A Thing.

Well, I don’t know if it’s a post-PaizoCon malaise or what, but… feels like a good place to wrap it up. (Oh who am I kidding?… I’m trying to plow through Good Omens one more time before the Amazon series drops.) Next week the boss battle will heat up and get interesting, so be sure to tune back in for that. In the meantime, feel free to drop by Discord and join the ongoing merriment. Hope your gaming is good, and we’ll see you next week.