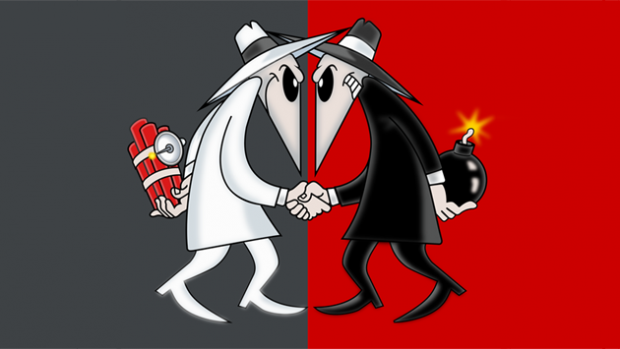 Jason recaps the events from Roll For Combat, Episode 050: Never Tell Me The Odds.

You guys don’t realize it, but you dodged a bullet. As I’m sitting down to write this week’s Talking, we just wrapped up our fantasy football draft, and you were this close to getting a full column on THAT because I’m tired and want to go to bed. It’s not officially an RFC league, but all five members of RFC are in the league, as are two guys who have been part of our gaming group over the years but have not (yet) appeared on the show. So RFC at least has a quorum, which means I could’ve found a paper-thin rationalization to talk your ear off on that, but… nope. As the DEFENDING CHAMPION, I shall be magnanimous and move on.

(And yes, I threw that last bit in just so Steve would have to read that when he edits this. He knows he’d do the same.)

As Steve mentions, it’s Episode 50 of RFC, but I have to admit that doesn’t mean as much to me as the time-based milestones do. I think it’s because of the way the editing process works: as we’re going back and listening now it’s a milestone event, but at the time it was just another session. It’s like the M. Bison “it was a Tuesday” scene from Street Fighter – it means something now, but it didn’t while we were putting it on “tape”. At least when we hit the one-year mark in a week or two, we’ll know it as it happens and maybe we’ll break out the party hats in quasi-real-time.

The above having been said, if we have any amateur goldsmiths in the crowd that WANT to commission a solid gold statue of Tuttle and CHDRR to mark the occasion, I won’t stop you. Just don’t ask where it is a few weeks from now when I’m posting pictures of my new Tesla on the Discord channel.

In-game, it’s a combat episode and a rough one as it’s basically Operative vs. Operative, both with the exact same cloaking effect. I won’t lie: as it first started, it was pretty amusing to realize that the enemy was pretty much working from the exact same toolbox Hirogi was. But the novelty wore off as the combat dragged on, and it became kind of frustrating. First, because it was so hard to land hits with the 50% miss chance. It really sucks to land a hit and then have it wiped off the board. (And Steve was maybe a touch TOO gleeful about erasing Mo’s crit… no, you really don’t need to tell us it would’ve been 38 points of damage.) The other half of the equation is that the enemy only took the penalty if he attacked Hirogi; if he … hypothetically… dropped a bunch of grenades on the rest of us, we weren’t nearly as lucky. For us, it was Operative vs. Operative; for the bad guy, it was Operative vs. Fish In A Barrel.

As an aside, I loved the moment when the big semi-sentient hunk of metal hit its reflex save and the supposedly racially-nimble mouse-creature did not. Fannnnnntastic. That was the grenade that hit for almost minimum damage, but I still thought it was funny. Images of CHDRR busting out his best parkour moves or doing Matrix-esque bullet-time flashed through my mind for a few seconds.

On the bright side, the riding saddle got its first real use, and while it wasn’t the game-changer I thought it would be, it was fairly handy, and at least saved me some of the two-step shuffle. I think it’ll get even better if I can add some movement improvements to CHDRR at future levels to leverage it better – upgrade those jump jets to full flight, greater ground speed, something like that. (So what I’m saying is Level 20 CHDRR will have his own drift engine.) If you were listening closely, I thought about kicking in the jump jets at one point early in the fight, but I realized it wouldn’t cover the vertical distance anyway and would leave me halfway up the cliff wall with a big target painted on my back. So I decided to go around the long way, even if it cost me a few rounds.

This fight did underscore the feeling that I need an offensive upgrade soon. The first time we went shopping, I went armor because it was like a +3 or +4 to both ACs. The next big shopping trip was mostly about utility; making Tuttle a little more versatile. In both cases, going from a d4 to a d6 on a primary weapon was all I could afford on the gun side, which didn’t seem like good bang for the buck (pun fully intended).

But when Mo is thumping guys for double digits on every hit and Hirogi has his trick attack (when he lands it), it’s a little awkward to still be chipping away with the cheapest gun in the game. Even applying Overcharge only adds an extra d6, and since (at least temporarily) I’m not wearing the recharge upgrade in my armor slot, I have to pick my spots with that move. (There’s an improved Overcharge, but I don’t think that’s even available for a few more levels.)

Truth told, I’m a little envious of that fancy sniper rifle we pulled off the enemy. Not envious enough to take sniper rifle proficiency as a feat, but envious. Long arms on the other hand? Maybe. I’ve always felt “Tuttle With A Shotgun” has some serious comedic potential, even if half of it is having recoil toss him across the room in zero or low gravity situations like a cartoon character.

The X-Factor on the weapon front is CHDRR. Steve has been keeping the specifics of CHDRR secret to preserve the surprise, but he has said that some of CHDRR’s abilities scale as he levels up. So I’m torn – I could upgrade CHDRR and have it be a “waste” of money if he gets something next level that renders it moot. Or I could leave him as is waiting for the goblin upgrades to kick in, and continue to be underpowered until that happens. Best of both worlds would be to find a weapon that I could use as a free upgrade.

It’s halfway between show notes and Steve’s GM tip, but I found the ongoing gamesmanship involved with the d100 roles kind of amusing on re-listen. I get that for all our debate, there’s no “right” answer. (Next week’s Etiquette Corner: we debate the pronunciation of GIF – “gif” or “jif”?) Personally, I’m a classic “high is good, low is bad” guy – keep it consistent with everything else. But I can respect John’s stubbornness on sticking with low numbers (maybe that’s how they do it in WoW?), and Bob’s decision to go for the middle was an inspired bit of lunacy that should please fans of the standard normal distribution everywhere. On the other hand, such tomfoolery clearly displeased the Dice Gods, who rewarded him with that insultingly close 77.

Getting to Steve’s point, it’s weird. That little bit of choice and agency – choosing low, high, or ridiculous – doesn’t feel like it should matter that much. It’s not even real physical dice in this case. Steve could literally put a rock in one hand and have us say “left” or “right” and the net effect would be the same. But it still feels like you’re doing something to choose the outcome when you pick the range you want to use. I guess the phenomenon is similar to the slot machines in a casino – they’re going to land where they’re going to land, they technically don’t even need to put buttons on the thing and could just resolve the spin when you put your money in. But putting buttons or a handle on the machine gives you an illusionary veneer of control – “I chose to stop the machine right here”.

So basically, we’re all just filthy degenerate gamblers, is what I’m saying.

In other news, the hint-dropping on Rusty’s condition continues, and it’s a little awkward because here’s where I have to embrace roleplay and split my duties of Jason, Writer of Paizo Book Reviews vs. Jason, Player of Tuttle. Having reviewed the Armory (mild spoiler), there’s something in there that sounds a WHOLE lot like what Rusty is going through, but in the context of this game, there’s no way Tuttle would know that without making some skill rolls (Life Science, Medicine, maybe Mysticism), and I haven’t really pushed too hard on that front. Though I suppose it’s also a partial attempt on my part to embrace the idea that being undead isn’t THAT big a deal in the Starfinder universe. I as the player still think undead are creepy and are going to turn on us at a moment’s notice, but Tuttle lives in a world where they’re normal. (As are talking rats, for that matter.) Just as long as Rusty doesn’t turn full demon in the middle of a fight, we’re cool.

I think that’s about it for this week: tune in next time when we continue to bounce around low-gravity, flop around in the space dust, and try to find the cultists’ base of operations. Well, we’ll try to, anyway. We haven’t seen the last of trouble, and trouble hasn’t seen the last of us. In the meantime, feel free to drop by the Discord and join the fun happenings there.