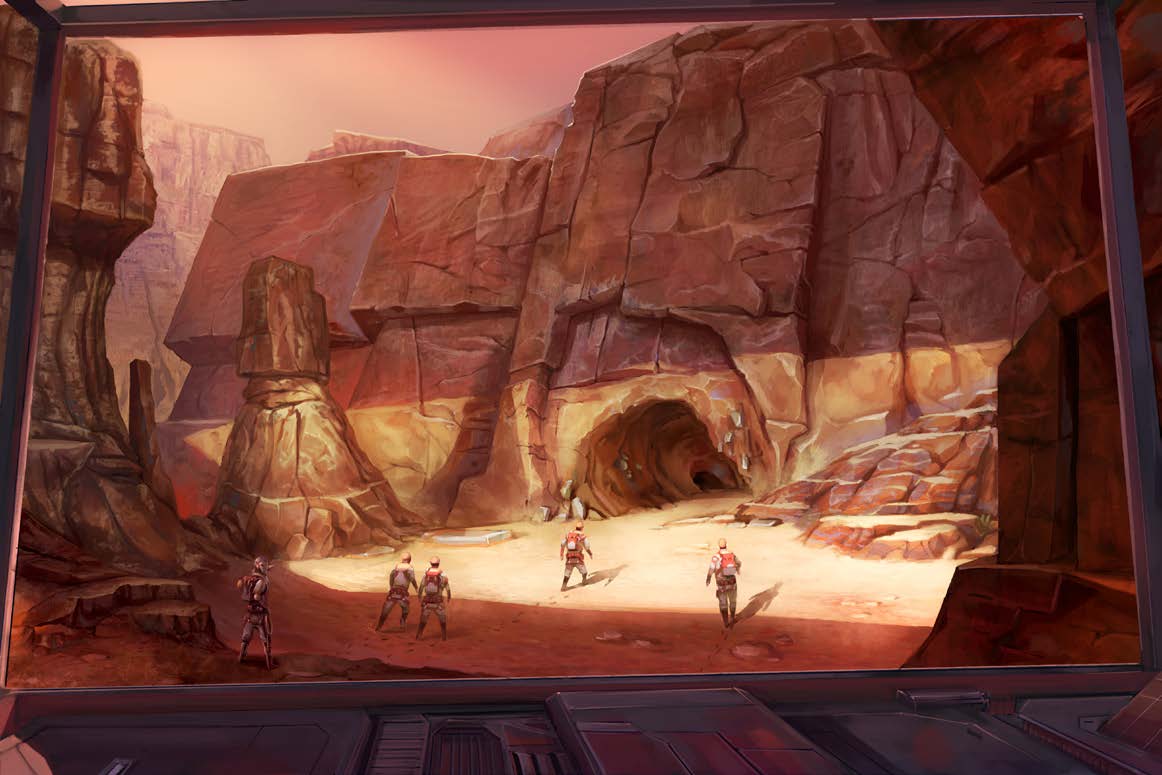 Jason recaps the events from Roll For Combat, Episode 037: Where We’re Going We Don’t Need Roads.

Have I mentioned recently how much I hate difficult terrain?

I suppose I should refine that a little bit. I don’t mind difficult terrain in small enough doses that it adds some strategic nuance to the battlefield. Figuring out how to navigate around a few obstacles during a fight can make for a fun challenge. Sometimes it can even be helpful in cases where you can turn the terrain around and use it against the guys you’re fighting. So in small doses, I suppose difficult terrain is fine.

THIS map? Where it’s just an entire football field of difficult terrain, with a sniper shooting at us while we’re trying to navigate it? Ugh. At least there are some walls and pillars that can be used for cover, so it’s not a complete charge to our deaths, but it’s kind of a pain. Then again, I suppose it could be worse – going back to Pathfinder, there was a level of Emerald Spire where the whole level was difficult terrain AND complete darkness… fighting against goblins that were unaffected by both. That was just miserable. (Especially since I was playing a rogue and could never get myself into position for Sneak Attack damage.)

I also feel like not knowing where the entrance just feels like a bit too much. You’ve got this huge map with 200 or 300 feet of difficult terrain to cover, someone shooting at you, AND you don’t really even know where you’re supposed to be going? It just feels like some portion of this should’ve been a little easier. Or maybe it’s our fault – maybe we should’ve been doing Perception rolls to look for a path or something. But we’ll give it some time to play out – other than Mo, most of us haven’t taken any real damage. The other great equalizer is that the sniper has been rolling like shit so far. That bought us a little time to figure this out.

I would also like to state for the record that I still hate Incorporeal creatures more, but Difficult Terrain is working its way up the list.

Splitting the party is starting to look like it’s going to be a really stupid move, but I’d like to say a few things in our defense.

First, Hirogi LOOKED like was going to stay to the north with Mo the first few rounds and Rusty and I were going south; 2 and 2 would probably have worked better than 3 and 1. I don’t want to throw Chris under the bus exactly – we didn’t really explicitly say “you go left, we go right” – but by the time he changed course, Rusty and I were pretty far along to the south. I guess this is why Order of the Amber Die has a player captain, huh?

Also, I don’t know about the other guys, but I have to admit I misread the situation at first and thought Mo was getting hit by a trap, not a creature. I thought maybe the sniper had set up some kind of defense perimeter – maybe an entangle grenade or something – and Mo had just set off whatever it was. He’d be entangled for a few rounds, then he’d break free, and we’d get back to business. By the time the thing started following him and continuing to attack, we had already gone south toward the head of the statue and coming back for him would’ve just taken longer.

Lastly, there was a roleplay case to be made for not helping Mo: John was initially kind of ambiguous about the thing attacking him (remember that it missed the first time) and the shooter was the much more obvious threat. So while it was obvious to us at the table, you can make a case the characters acted correctly. When you’ve got someone actually shooting at you vs. “mean air” or whatever Mo’s complaint was… you probably choose the person shooting at you.

I did like discovering Tuttle’s new tactic of “drop-and-pop” by using his ysoki racial Moxie (for the record, Kip Up is the non-racial feat that does the same thing, so we were both right), but I would point out that it’s ONLY good for a situation like this… where you’ve only got a ranged attacker to contend with. Completely useless if there are any melee enemies around. If you’re dealing with ranged attackers… great, you give them a -4 to hit, what’s not to like? If you drop in a place where you could still get meleed… oh boy, might as well just get your will ready. Not only do the melees get +4 to hit, but I’m reading the racial for Moxie, and although you can stand up as a swift action, it doesn’t seem to mitigate attacks of opportunity.

So we end the episode on a bit of a positive note because at least we found where the shooter is hiding. Unfortunately, we still need to find a way to get in – doesn’t sound like those windows big enough, though maybe we could chuck some grenades through them – and we still need to figure out how we can circle back around and help Mo out. (Or strip the gear from his corpse. Only the dice know for sure.) Hang in there buddy, we’re coming for you!

For once I’m not going to spend much effort on Tuttle’s leveling process – Level 4 was kind of boring and the podcast covered the major bullet points: a better heal for CHDRR and learning Elvish so we can carry on if Wahloss meets a nasty end. I’m also not going to say much else about Steve’s PaizoCon observations because I wrote a whole thing of my own. I would suggest you might want to check out Steve’s appearance on Know Direction, though. (I’m listening to it live as I’m writing this, but my understanding is they’ll have an edited version on their site later.) Steve and the Know Direction guys get into a pretty deep dive on their Pathfinder Playtest experiences, so if you want more information on that, you might want to check that out.

Next week: more difficult terrain, we find out if Mo survives, and maybe we’ll actually find a way into the Plague Warden. Or maybe not: Steve’s not lying that this is a long battle. But a fun one, so you’ll want to see how it turns out.