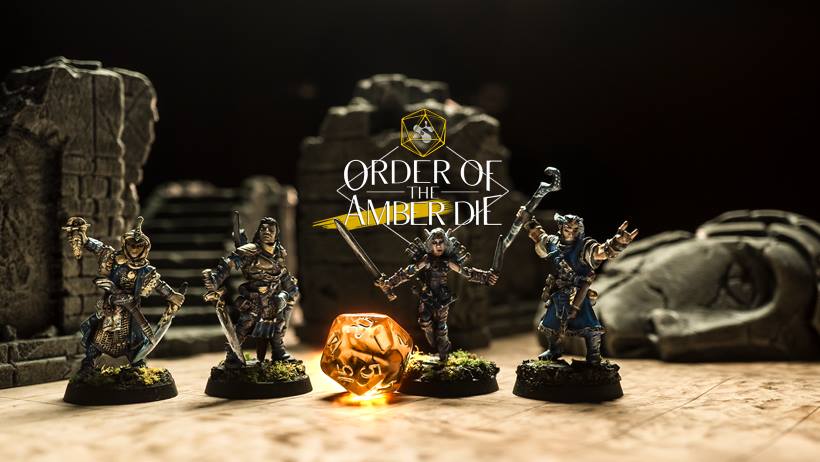 I have to admit I don’t have a lot to say about this week’s game action – I’m not sure there’s much to say about yet another round of fine-tuning our shopping lists. I guess I’d rather spend my Talking Combat this week discussing Steve’s interview with the Order of the Amber Die. I actually hadn’t heard about them until Steve told us about them and pointed us at their site, but now that I have, I’m pretty impressed.

Overall, I find the idea of what they do pretty appealing. My closest equivalent would be the fantasy baseball league I was in for 30-ish years – we had/have a yearly in-person draft which was a similar experience though not nearly as intense. (I’m not in the league anymore, but since the draft is in Pittsburgh, I still get to see everyone, and there have been a few years where I’m the emergency drafter for someone who can’t make it.) You get a chance to reconnect with all these friends going back your whole adult life, you spend a weekend engaging in a common hobby (though for some, the game is only the flimsy excuse to socialize), there was a similar vibe of sitting around telling “war stories” of seasons past even after the draft was over. I can certainly see the appeal of applying that sort of model to role-playing games. Sounds like a lot of fun, actually. I also thought the idea of a main group and a bench was pretty inspired, and allowing people on the bench to still contribute as NPCs seems like a way to keep the group as a whole thriving. First, it makes it a less binary commitment – if it was “main group or nothing”, I would think attrition might become a problem where people would say “well, I didn’t make the roster for the last three adventure paths, why am I still part of this?” and drop out. But if the people on the bench still have the option to come by for one or two days, say hey to everyone, and drive an NPC… that seems like a win-win (much like my “emergency drafter” cameos in the baseball league). And, while they’re not looking to grow it to an international franchise ala Batman Incorporated, it does seem like it also creates a gateway path to try out new people without forcing them to jump into the deep end of multiple four-day commitments spread out over the course of the year.

Having said that, confession time: there are pieces of the Amber Die model I’m not sure I could handle.

The first is the pace and length of the session itself. Four full days, possibly playing in uncomfortable conditions to create immersion… did I hear him say they play standing up? I have to admit I’m not sure I could handle that. I’m used to “bundled up on the couch with my laptop and a dog or two on my legs”. Our RFC sessions usually run 2 or 3 hours, and sometimes my Dads-n-Kids sessions go 4 or 5, but multiple full days? That sounds pretty intense, and I have to admit, I’m not sure how well I’d keep up. Or at least, it would be like running a marathon where I’d be curious to try it once to see if I could do it, but I’m not sure I could do it on a regular basis. And it’s funny… as I’m writing this, I thought to myself “well that’s gonna throw a wrench into PaizoCon” because that’s also four straight days of gaming as well. But I think that’s different because that’s four days of discrete 2-3 hour commitments, as opposed to one big event that dominates the whole schedule. If you can’t hack four full days at a con, you can build breaks in. Go back to your hotel room and take a nap. I suppose if you absolutely had to, you could blow off a session without sending the Earth flying out of orbit. If you can’t hack the pace of an Amber Die session, that could really wreck things for the rest of the group. (Among other things, I wonder what they do if someone has to cancel or leave early – I’m sure emergencies arise.)

The other thing that I’m not totally sold on is the idea that they play using Iconics, which – in case there’s someone listening who’s newer to the game – are pre-made characters created by Paizo. For me, part of the whole fun part of playing these games is the creation and evolution of the character. I’m not as deep of a roleplayer as Bob is, I don’t pretend Tuttle Blacktail is the most original creation on the face of the earth, but I do like the idea that my character is MY contribution to the story. If I’m playing a character concept someone else came up with, that might feel like something’s missing. Don’t get me wrong. At the end of the day, the other people at the table are more important than the character you play – I don’t think I’d ever refuse to sit down at a table because playing a pre-made is somehow beneath me. And the Amber Die guys do seem like fun guys who are wired similarly to our group. In one of our out-of-channel conversations, we started joking about how Steve’s interview was like the episode of Seinfeld where Elaine started hanging out with Bizarro Jerry and his friends (probably more famous as the “Man-Hands” episode). Just saying that in the long haul, building that character from the ground up and watching it grow is one of the essential things that draws me to the roleplaying experience in the first place.

The idea of a Player Captain also seems like more of a mixed bag to me. On one hand, it’s probably a good idea to have someone be in nominal charge of the team and it’s good to have someone looking at the big picture of a campaign; on the other hand, I worry it could reach a point of overplanning where maybe it stifles individual creativity a little. If anything our group tends to go the other way – I think there’s a degree to which there’s a little one-upsmanship at work where we actually like to surprise each other with our builds. Beyond coordinating on group resources like healing, we kind of each do our own thing.

Then again, I don’t want to knock the arrangement too harshly because I’ve never really experienced it. We’ve never really actually tried having a formal captain – Bob tends to be loosely in charge of things like note-taking and keeping track of time, but it sounds like the Player Captain role goes even deeper than that. So maybe I’ll leave the jury out on that one until (if/when) I ever play on a team that has one. The last thing I’ll briefly touch on is those teamwork feats they discussed. I remember (in particular) looking at those for a rogue I was playing in Emerald Spire, and they do seem like they offer some pretty powerful benefits… EXCEPT that other people have to have either the same feat or some complimentary skill that makes the feat go. And unfortunately – at least in Pathfinder – feats always feel like they’re so scarce that it’s hard to justify picking something so situational when there are choices that are applicable in almost any fight.

In particular – and this is just me thinking out loud – it would seem particularly hard to go with teamwork feats for Society play. If you’re playing Society instead of adventure paths in a long-standing group, maybe you can still make them work. If you’re playing with random players at cons or some other pick-up group situation, you have almost no ability to guarantee the other people in your group will have those feats.

But that gets off in the weeds a little. All in all, I think the Order of the Amber Die sounds like a pretty fantastic idea and I’d love to be a fly on the wall at one of their sessions, to see the mayhem in person. (And OK, a die that rolled four 20s in a row is probably somewhere up there with the Liberty Bell and Mount Rushmore as a bucket-list item.) Among other things, it makes me want to call my old gaming group from my childhood – I think I’m the only one that still plays regularly, but I’m in touch with all of them – and spend a long holiday weekend running a game. Hmmm…

Next week I’ll look forward to the second part of that interview, and YES, I can guarantee we finally leave our safe haven and head out into the wilderness. Pinky-swear and everything. In the meantime, I may also be doing a little bit of an Episode Zero for our Society game, so potentially be on the lookout for that. And as always, we tend to be around on our Discord channel and on social media, so drop by and join the festivities if you feel so inclined.