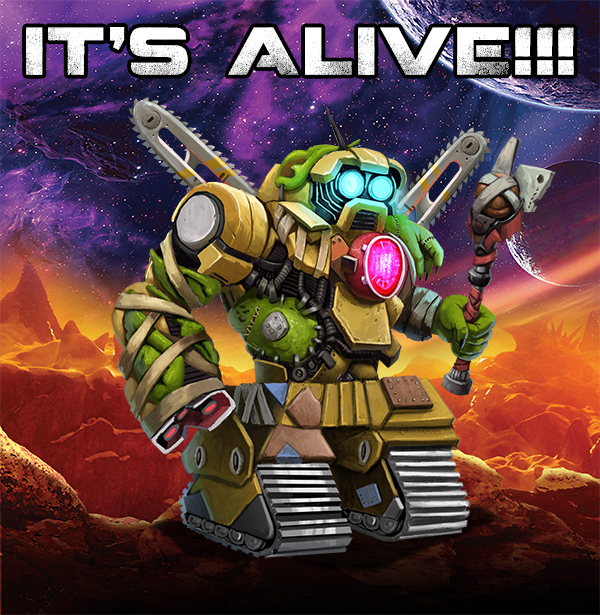 Jason recaps the events from Roll For Combat, Episode 017: He’s Only Mostly Dead.

So… CHDRR got his upgrades, and this is shaping up to be well worth breaking character.

In particular… THE BUTTON. (Yes, I’m going to use all-caps every time I say it.)

Color me intrigued, but with some hesitation. It sounds like it could do some really cool things (our goblin friends specifically mentioned explosions and acid breath), but I have to believe that it’s also meant as a device of last resort. Not to be too meta-gamey, but I assume if it JUST did good things, it would be too overpowered, so it probably does some bad things too. Also… these goblins don’t seem like the sharpest knives in the drawer, so even from a roleplay standpoint, it wouldn’t be surprising if there are a few bugs in the system.

So as much curiosity is gnawing at me to hit THE BUTTON the first time we enter combat, I don’t want to either kill CHDRR and force a 24-hour rebuild or accidentally wipe the party. You know what they say – “curiosity kills the party”. So it’s killing me to say it, but I’ll have to save THE BUTTON for the rainiest of rainy days. Just know that I want to see what it does just as badly as you do, and I’ll be looking for the right moment.

And yes, I was actually half-serious about keeping it in my cheek pouch and using it like a cyanide capsule.

But hey, let’s not lose sight of the fact that, even without THE BUTTON, we’ve also got chainsaw wings and an extra-spikey bat for a melee weapon! (Does this mean CHDRR now has a Negan Subroutine and is going to start swearing a lot more? Even if not, I might have to roleplay it that way.) I don’t know yet what those translate to damage-wise, but they certainly sound impressive. Some of the other stuff is a little more ambiguous — not sure if the “Murgle parts” or the “laser eye” are going to have any real effect, or if that’s just John adding flavor/aesthetics to his roleplay.

The other major plotline of this particular episode was Rusty’s ongoing battle with Space Rabies. I’m not going to belabor the point about disease… it sucks. I’m more interested in the broader gaming questions raised by the situation.

Being candid, the Eoxian healing packs felt a little bit like Steve throwing us a bit of a life-line, so Rusty didn’t die. I somehow doubt the adventure was written that way, and it felt pretty ad-libbed. (If that WAS in the adventure, that’s some pretty impressive contingency planning on Paizo’s part.)

The first question is a more philosophical “should he have done that, or should he have potentially let Rusty die?” and I think I’m OK with Steve’s choice. Here’s my attitude both as a player and occasional GM. I don’t like giving or accepting outright freebies – it robs the players of achievement and cheapens the experience. On the other hand, it’s an interactive story, and sometimes the GM’s job is to serve the story, not the dice. Hand-in-hand with that, I don’t think the GM is responsible for bailing the players out of their own stupidity, but I sometimes think when the players are making the right calls, and the rolls just go wrong, the GM can serve the greater good by offering at least a CHANCE at Door #2… if he can do it in a way that serves the story well.

But that brings up the second question – “what’s it going to cost us?” Knowing Steve, I know that if he DID throw us a life-line, there’s going to be a price to pay. As with CHDRR’s mods, when you get any sort of special boon, there’s going to be some sort of negative to balance the ledger. Reward and risk go hand in hand. Gotta pay the iron price. So I find myself thinking that either the “cost” of the packs will be some sort of additional questing, or that there might be some side effects and Rusty might end up not-fully-human after all is said and done. (Given Steve’s obvious enthusiasm for turning someone undead in his interview with Erik Mona a few weeks back, I think we all know what the answer is going to be. Cue RustyZombie in 3… 2… 1…)

Those were the big themes about the episode, but I also had a couple of smaller things to touch on.

First, I was surprised just how paranoid Hirogi was about the goblins. I mean, they’re goblins. They’re just about the definition of cannon fodder, to begin with, we disarmed them… how much trouble could they really be? I suppose some of that is reflective of how beat up we were, and maybe there are some “goblins are bad guys in Pathfinder” mental residue in his thinking, but I thought he was being unreasonably cautious. I DO think we want to make sure they don’t steal our ship or Gevalarsk’s crate or anything like that (which is why I suggested locking out access to the bridge), but locking them in a room like prisoners seemed excessive. Then again, maybe I’m biased. Because “chainsaw wings”.

The debate about opening Nor’s package continues, and we’re still without resolution. I’m sticking with my guns on this one – while, yes, there’s a chance we’re getting played, we’re supposed to be representing ourselves as professionals, and how would professional couriers in the real world handle it? FedEx might take reasonable precautions (X-ray your package), but they wouldn’t actually open it and examine the contents. It just feels like we should do the same unless there was compelling evidence that the package had been tampered with. A side data point is that we’ve generally been siding with the Hardscrabble Collective, and if the HC guys were OK having this cargo on their ship, we probably ought to be OK with it too.

My last point is not even a gaming observation, but a life observation. Ever say something that sounded completely logical to you, right up until the point when someone says it back to you, at which point it sounds like the stupidest idea in the world? Yeeeeeah…. that was my conversation with Gevarlarsk Nor. “So, we’re on a ship under quarantine where most of the crew probably died, two of our people contracted the same illness that probably killed the crew, and we’d like to bring them back to home-base – KNOWING THEY’RE INFECTED – for treatment.” Yeah, I’m an idiot sometimes.

So this episode was a bit transitional – getting Rusty, CHDRR, and Mo (to a lesser extent) back in fighting shape; checking in with the homefront. Next week, we begin actually to lay out our next steps, and – at the risk of throwing you a spoiler – we actually get to see the full extent of John Compton’s madness with the reveal of CHDRR’s new character sheet. If you’re a CHDRR fan, you’re gonna want to catch that one.