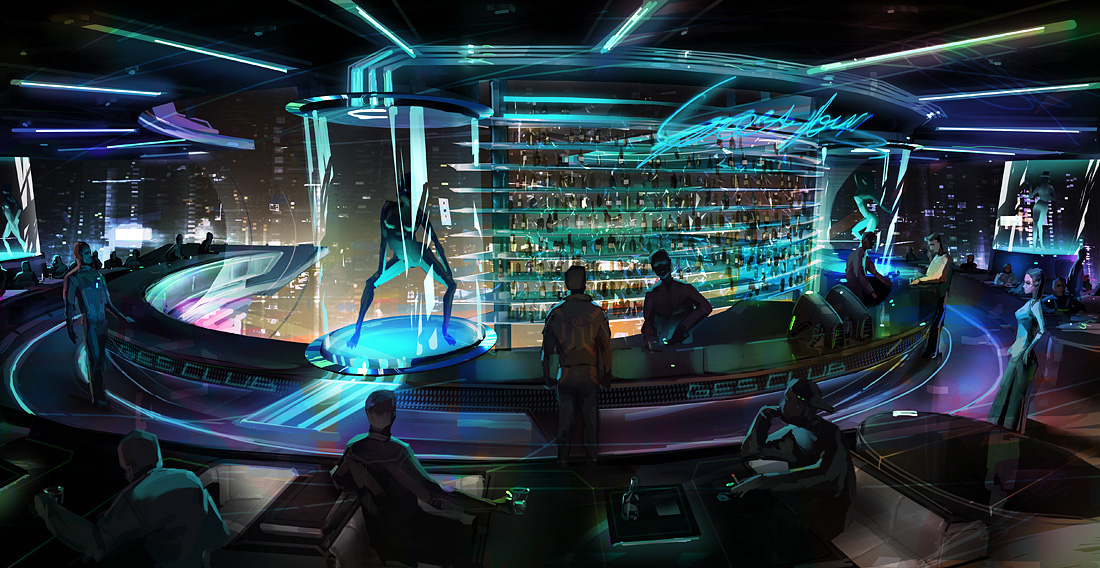 I think the first thing that struck me about this episode was the contrast in styles between Tuttle and Hirogi in this episode. Chris was playing with the throttle wide open – not only did he not seem to care about bleeding encounters; it almost felt like he welcomed it. Heck, at one point fairly early in the fight with the bouncers, Chris suggested I just toss a grenade into the card game just for shits and giggles. Meanwhile, I was playing Tuttle very cautiously, mostly acting as the lookout, waiting for the other shoe to drop – whether it was going to be the goons to the west or the boss arriving on the scene. As a result, I didn’t actually do very much during the fight except move myself around and give orders to CHDRR.

A little bit of it is “still easing my way into a new rule system”. This is only our second fight, I’m still not sure how brittle Tuttle is, so I’m trying to keep him on the fringes.

Another chunk of it is “that’s the character I designed”. At the end of the day, I’m playing a pet class, and that’s how you play ‘em. If that means there’s a fight or two where Tuttle ends up on the sidelines because that’s what a smart and somewhat squishy science-type would do in that scenario … c’est la guerre.

But OK, I’ll also admit that I’m not a fan of bleeding encounters, and was cringing a little on the inside every time Hirogi did something crazy. As Steve said in the intro: yes, I like combat, and I like to keep things moving, but what I don’t like is stupid deaths. In the fathers-and-sons Pathfinder game I play locally, the kids are bleeding encounters quite often, and it can get pretty painful. Let’s just say I always bring a few spare character sheets and leave it at that.

Wait. Did I just imply Chris is playing Hirogi like a 13-year-old kid? Ummm… errr…  “a spokesman for Jason would neither confirm nor deny”…

I swear it’s not that I’m a coward. Honest! In the Iron Gods campaign we’d been playing before starting this Starfinder game, I’m playing a meat-shield warpriest with buffs and self-heals out the wazoo, and with that character (Ezrik, should I ever mention him again), I’m diving into combat almost as aggressively as Hirogi is currently doing. Then again, Ezrik also has a giant chainsaw which makes melee intensely satisfying … so … there’s that too.

I will say: one tangible takeaway from this fight is that as I get some credits together, I may have to invest more in grenades. Generally, I’m not a fan of single-use/disposable items – it feels too much like throwing money away — but they actually seemed fairly effective in this battle. Even though I didn’t actually get to throw one, injecting a little more “Mad Bomber” into Tuttle’s repertoire might be a good call going forward. The only thing I could see being problematic is hand-switching between pistol, datapad, and grenade – might get a little dicey with move actions already being kind of scarce.

Beyond the game action, I also thought Steve’s discussion of rules interpretation and mistakes in the intro was worth a few thoughts.

As far as “rules as written” vs “whatever” and getting into extended rules discussions during the game, I’ll put it this way … I’m rules-as-written within a certain (5-10 minute) timeframe, but after that point, I’m willing just to let the GM decide so the game can move forward. Even if it’s something that I fundamentally disagree with or think is the wrong decision.

Steve is right that the “game” portion of the role-playing game works best if everyone knows the rules and the work consistently from session to session. I don’t even mind the occasional house rule (example: in our Pathfinder campaigns, Steve tends to hand-wave material components for spells unless there’s an ingredient that is particularly expensive or exotic) as long as the house rules themselves are ALSO enforced consistently. But at some point, the “role-playing” aspect still matters too, the story is still ultimately driving the action, and I’d rather keep the story moving forward.

I’ll also add that within the dynamic of THIS particular group, I’m far and away the most “whatever” member – I don’t know if it’s that living in New York City makes you relish a good argument, but the rest of these guys can rules-lawyer long past the point where I wander away from the computer and start alphabetizing the contents of my spice rack.

With regards to GM mistakes, I take much the same view I do with sports. I’m a sports fan, and I always felt like unless the bad call literally decided the game in the final seconds, there’s always a chance to fix it or make up for it. If a “holding” call wipes out a TD with 20 seconds left, complaining about the refs is legit. If a “holding” call wipes out a TD in the 2nd quarter … you’ve got an entire half of football to overcome the bad call. (See also: the goal that was waved off early in the 2nd period of Game 6 of the Pens-Predators Stanley Cup Final. YES, it was an important goal, but they also had 38 minutes to score another and didn’t.)

To bring the comparison into the realm of role-playing games – I only get upset about rules questions if the consequences of the mistake were particularly dire and there’s no chance to repair them, which USUALLY means character death. If Steve makes a second attack of opportunity in the same round, and that’s the hit that kills my character, I’ll argue that until I’m blue in the face. If Steve misapplies the five-foot step rule in round 5 of a 22-round combat … life’s too short. Even then, I think most of the value is clarifying the rule going forward, rather than rubbing the GM’s nose in a mistake.

And that brings me to my last point. (And I swear I’m not buttering Steve up to get a roll later.) I tend to give my GMs the benefit of the doubt because of how much responsibility the GM takes on just to make the game happen. For every item a player has to keep track of, the GM probably has 10 or 20. So I’ve always had the mentality that if the GM gets something minor wrong … let it slide because the game is still happening largely because they volunteered to do the heavy lifting. Me, I’m just here for the snacks and smart-ass comments.

As we end the episode, the cannon fodder has been dealt with, and it seems like we’re about to face our big boss battle. I don’t think it’s too spoilerish or meta-gamey to “reveal” that Jabaxa told us Ferani and Hatchbuster are dangerous customers, and Hirogi’s recon suggests there’s almost nowhere else in the club they could be, except behind the door to the north. I’ll admit to a little nervousness because even the grunts put a hurting on Hirogi; you gotta wonder what sort of pain a guy named “Hatchbuster” can dispense. But I guess we’ll find that out next time. In the meantime, thanks for listening and drop us a line if you have any questions or comments.