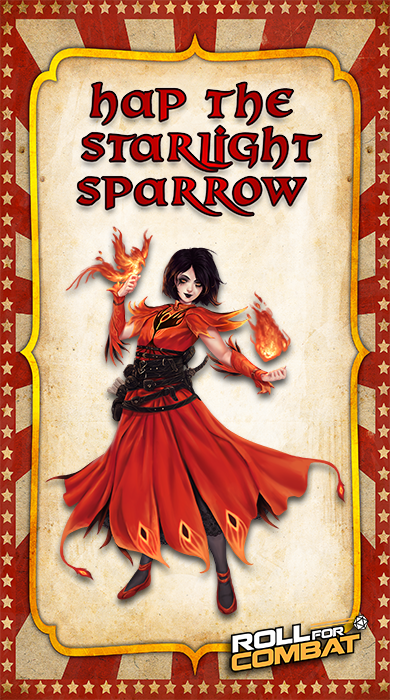 As a baby, Hap was abandoned by her parents and left as an orphan at Mistress Dusklight’s Celestial Menagerie. She was discovered by Professor Zarlian Kyosophus, the juggler and fire-eater, who reared her as his own daughter. When she was old enough, Hap earned her keep in the circus by feeding the circus animals and cleaning their cages, and her favorites were always the birds.

As Hap neared the date that was approximated to be her 10th birthday, The Professor began to notice that her brown eyes were beginning to turn a bright and fiery orange. Fearing the worst, he sought medical attention for the girl who called him “dad,” and when no answers were found among the curative arts, he sought the help of a more arcane nature at the Arcanamirium in Absalom. It was there he learned that while Hap’s biological parents were likely of human descent, her blood also bore the taint of an Efreeti.

Fortunately, Zarlian was a well-traveled and worldly man; he earned his title, The Professor, by always being able to know a little something about almost anything. He helped Hap learn to draw out the raw elemental power of her blood and taught her how to use it for entertainment rather than destruction. And when the cruelty of the Celestial Menagerie grew too much to bear any longer, The Professor and Hap departed with a slew of other performers to start a new circus — a kinder circus.

Hap has always had a deep love of animals and of people, and she adored being a part of the circus because it brought laughter, wonder, and joy. She always dreamed of being allowed to have her own act and has been practicing her craft for just such an occasion, but Mistress Dusklight never decided to give her a chance. Zarlian promised that in the newly formed Circus of Wayward Wonders, Hap, now at the age of 15, would finally have a shot in front of the audience.

Hap is played by Loren Sieg.