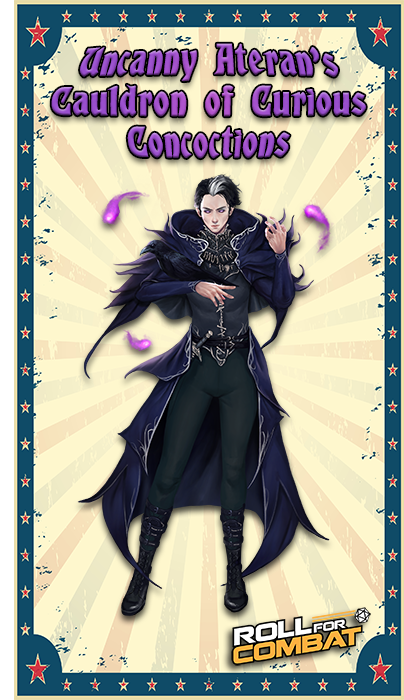 Ateran didn’t grow up in the circus. No, they weren’t even part of the previous company that fled Mistress Dusklight’s Celestial Menagerie. However, it’s been long enough since they joined the Circus of Wayward Wonders for this new company to learn Ateran shares only shrewd words and sharp glances. It was months ago that Ateran was at a coastal hamlet selling minor alchemical poultices and quick repairs, whatever you might need. Tall and dark-haired, the mysterious tone they used was terse if not polite.

They’d traveled the ocean for some time, heralding from some town or country Ateran would not say. Though the affectation of Ateran’s voice betrays a distance — as does the oddity of their attitude and curious magic — there is little they say of where it was they learned of such things. Even the oily midnight plumage of their raven Csillagos is foreign with a curious intelligence behind its eyes. The rest of the circus says they’ve heard Ateran whispering dark promises to the raven in the night as they worked over frothing flasks, glowing vials, and a bubbling cauldron. Whatever they’re planning it at least serves to keep the circus in alchemist’s fire for its pyrotechnics and sturdy clothing, no matter what rip may come of a performance.

But as avoidant as Ateran may be, come dinner time ‘round the fire or at taverns as the circus passes through towns, they’re always watching and listening, clearly vigilant in their work for the new company. Those violet eyes are bright in the darkness. One thing is certain: their focus has you and you won’t escape it.

Ateran is played by Rob Pontious.