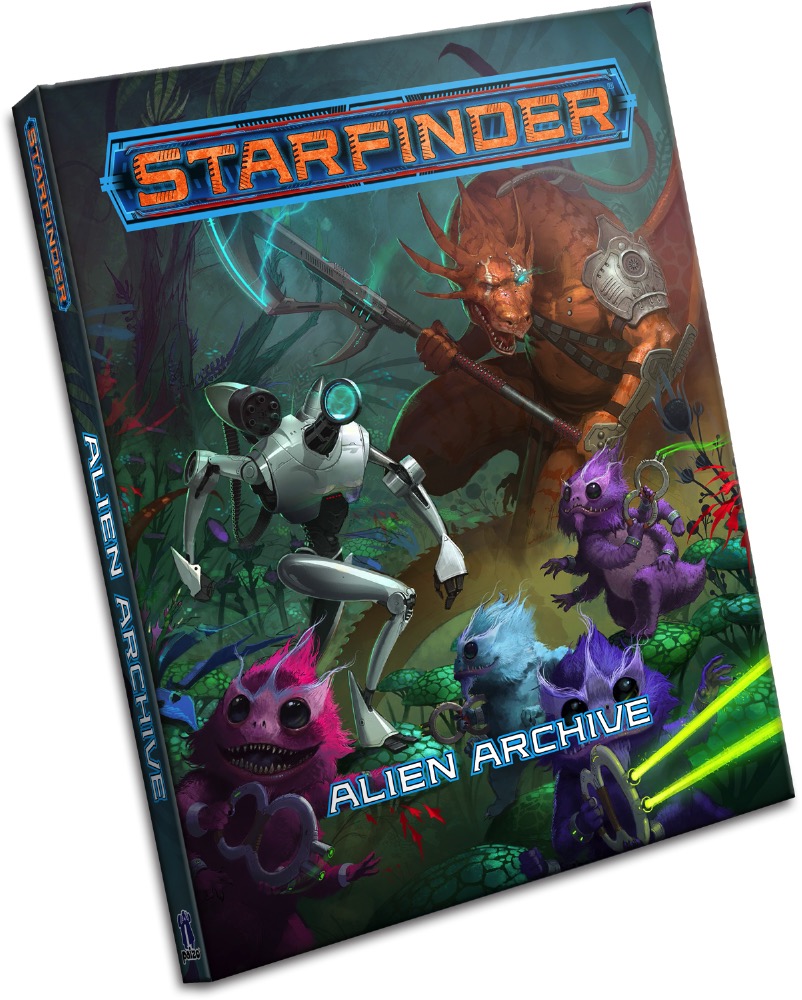 In addition, check out the podcast episode for a full one hour review of the Alien Archive!

It’s the newest rules supplement for the Starfinder game system. So new we had to rupture a small hole in the space-time continuum to get a copy. It’s best if we don’t discuss that any further, other than to say if you meet a cybernetically-enhanced otter named “Alphonse”, DO WHAT HE SAYS and wait for his quantum reality to collapse back into nothingness. But now that we’ve gone to all the trouble of rupturing the multiverse, the least we can do is offer you a few first impressions of the book.

At its simplest level, the Starfinder Alien Archive is a bestiary of creatures for use in your Starfinder games, even if that description sells it a little short. Nuts and bolts, it’s a little shy of 160 pages, with somewhere between 60-80 creatures (depending on how you choose to count variants and subtypes), 22 of which are presented as options for character races. Each creature gets a full two-page spread, so there are no half-finished monsters tucked into whatever space they needed to fill. As with pretty much all Paizo products, the production values are top-notch – beautiful artwork, the data-heavy elements are presented clearly… these guys have been doing this for a while and know how to make these books look great.

But let’s give the Paizo guys credit – they didn’t just dump a bunch of random re-skinned orcs and zombies on us and call it a day. There’s a lot of other stuff going on under the hood. First, there’s the sheer variety of the creatures. Yes, you do have some holdovers from the world of Pathfinder (elementals make an appearance, as do dragons), but most of the stuff in here is totally new. On one end of the spectrum, you have the Skittermanders, little technicolor furballs that could give the Porg from the new Star Wars a run for their money on the cuteness scale. On the other end of the spectrum, there’s the Novaspawn, which only has rules for starship combat because it’s so large (and yes… you’ll be happy to hear it has tentacles). The gelatinous cube of your youth gets a high-tech facelift as the Assembly Ooze, and now it can assemble and disassemble technology devices. One of the most intriguing might be the Hesper, a radioactive creature whose radiation attack can cause random mutations – because who doesn’t want to grow a few extra eyes in the middle of a battle?

Similarly the player races. The Drow, Dragonkin, and Space Goblins represent a shout-out to Pathfinder, but you’ve got plenty of new options. You have a couple different insect options; an aquatic race (the Kalo…. I actually kind of like them); the Reptoids, who have shape-shifting powers; the Nuar, who are kinda-sorta minotaur-ish. We also get an appearance everyone’s favorite little gray men from Area 51 (the Grays), and I can’t stress this enough… we now have a BRAIN-IN-A-JAR race, better known as the Contemplatives. So if you thought the races of the core rulebook were going to be a bit limiting… the Starfinder Alien Archive has got you covered. In addition to the creatures themselves, you also get a small armory of treasure items that can be included as loot for the party. Sometimes it’s the loot carried by the creatures themselves – the Sarcesian are a race of mostly mercenaries that happen to carry really good sniper rifles. Sometimes it’s gear that can be harvested from the remains – you can take the remains of a scavenger slime and make sticky bombs out of it. Sometimes it’s more of a similarly themed item – the Bryrvath is a creature that manipulates light to fuel its powers; in studying it, scientists invented the “Aura Goggles” which protect against any effects that target vision.

And that’s the other thing — the bestiary sneaks a fair amount of lore about the Starfinder universe in through the back door. Yes, they give a GM the nuts and bolts they need to run it in combat – stats, what tactics it uses in combat – but they also give you a bit of lore about the creature and its place in the Starfinder universe. Add up all that content, and you get a nice piece of world-building.

Lastly – and in some ways most importantly – the appendices contain a lot of info about HOW Starfinder monsters are made. With the Starfinder system being so new, this may be one of the few times I’d advise reading the appendices before diving into the body of the book – it’s that useful. I almost wonder if they shouldn’t have put it up at the front.

I will say at first read it felt a little too “template-y”. You start with an array, which is a general role – fighter, caster, “expert” – and then you add different “grafts” to represent other aspects (race, class, etc.). Add special abilities, give them skills and spells, bake for 45 minutes at 350… I’ll confess it felt a little dry and by-the-numbers at first read, and I even started to get some 4th Edition cold-sweats. But I thought about it a little further and I think it works because it serves the premise well. I think fantasy tends to come back to familiar tropes while sci-fi is expansive. When you look at sci-fi, a lot of the fun is this idea that you have a whole galaxy/universe as your playground. Think Star Trek or Doctor Who where… yes, they have a few core races that reappear, but they also have a lot of fun with Alien of the Week. Some people are going to want the comfort of adventure paths, but some people are going to want that more expansive feel, and what the Starfinder system DOES offer out the wazoo is flexibility. If your players decide they want to take a detour to a moon you weren’t planning on visiting, you can have a new race for them to meet in a matter of minutes.

Besides, as the authors themselves admit, if you don’t like the rules, feel free to bend or break them as you like.

If there’s one thing I’m not completely sold on… maybe I’m being overly sensitive but I sometimes feel like the Pathfinder holdovers feel out of place. You’re coasting along looking at all this new and exciting stuff you’ve never seen before and then… “Space Goblins” (record scratch). I know they wanted to have a gateway to the familiar to help ease Pathfinder players into the new system, but sometimes it feels a little forced and I wish they would’ve just burned their ships when they reached the New World. But I think that’s a personal taste more than a fault with the material – there are GMs and players who will want that familiar element in their campaigns.