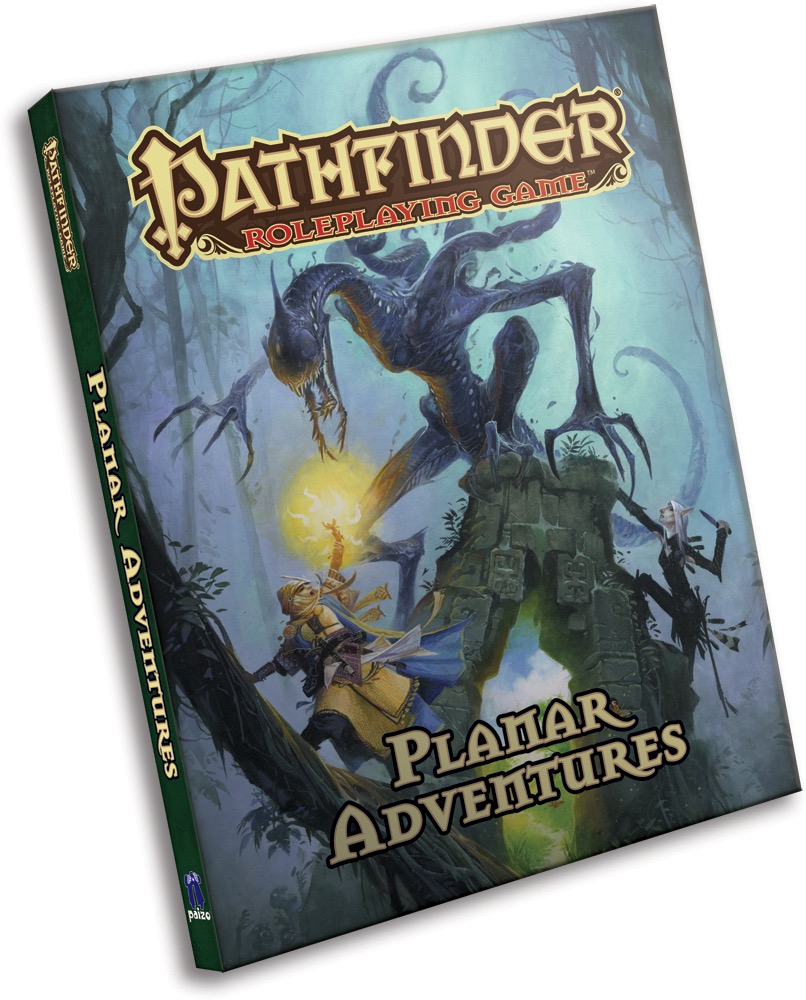 “One last time. Relax, walk the planes with me. One last tiiiiiiiiiime.”

Now I must admit, when Steve first asked me to take a look at it, I was a little squeamish. First, we mostly play adventure paths these days, so homebrew planar stuff isn’t really in our wheelhouse as a gaming group. More importantly, my most vivid frame of reference for a book like this is the old AD&D Deities And Demigods, aka “Let’s Give the Gods Stat Blocks. So You Can KILL Them!”. Done poorly, planar gaming is the sort of stuff that can get out of hand and go spectacularly wrong.

Wisely, Planar Adventures seems to know this and is not that kind of book. Much like the Pact Worlds book I reviewed for Starfinder, Planar Adventures is more of a toolkit for GMs who want to play around with this stuff. It gives a framework for what a planar adventure might look like and tools to make it happen, but it also understands that the GM still has to build the game that’s right for his or her table. Having just said this is mostly a book for GMs, the first chapter (“Planar Characters”) is actually for the players. You’ve got planar archetypes for several classes – some of these are pretty great. The Gloomblade intrigued me because it’s basically bringing Starfinder’s Solarian weapon into the Pathfinder setting – the fighter can summon a shadow weapon of his choosing, and it can be any weapon he’s proficient in. Feats are a mixed bag, but the most intriguing to me were the conduit feats, that can get anyone (even non-casters) access to magic abilities just by investing in Knowledge (Planes). One that made me drool a little was the Flickering Step feat, where for 9 ranks in Knowledge (Planes), you can use Dimension Door as a spell-like ability. The spells and magic items were a little more situational: a lot of the focus was on enabling planar travel – how to get there, how to get back, how to talk to the locals while you’re there, etc. – though some are more “planar-flavored” tools that would still add an exotic flavor to a more conventional campaign. But let’s be honest that the majority is designed to tug you in that direction.

The next chapter (“Running Planar Adventures”) is more of a high-level look at GM-ing planar adventures. First, there are the nuts-and-bolts discussions – how does time work, how does gravity work, how do spells work. Think “underwater combat rules”, but for the planes. Then more of a world-building digression into the actual theological workings of souls and what happens when characters die. Then the book gets back into the brass tacks – how do you enable this stuff in your stories? How do you get characters to and from the planes? What magical items can get them there? What story hooks do you place?

I will warn you the gods make an appearance here, but no, you can’t kill them. In fact, the only real tangible game impact is that each god has a “Divine Gift” they can bestow on their favored mortals. If you’ve been listening to our Starfinder podcast, Sarenrae is going to be particularly popular in our group – her divine gift is a prayer that makes all healing actions heal for the maximum amount for 24 hours. No more pesky 1’s to deal with! The next, and largest section (“The Great Beyond”) is the Rand-McNally World Atlas of the planar universe.

Let’s first review the general structure of the planes as Pathfinder sees them. In the center is the Material World, which is where we adventurers hang our hats 99% of the time. The next layer out represents the various magical forces – the four elemental types, plus positive and negative energy. (Though there are also Material-Positive and Material-Negative boundary planes.) Now dunk all of that in Jell-O to fill in the gaps between planes – that Jell-O is the ethereal plane. (“Though really it’s metaphysical Jell-O that co-occupies the same space as the Materi… never mind.”). That ball of cosmological stuff is the “inner planes”.

But then that Inner Planes ball represents the core of a larger ball, like the nucleus of an atom or the core of a planet. The next layer out is the ethereal plane, which connects to the “outer planes”, which are alignment based afterlives/homes of the gods themselves. “Heaven” is the Lawful Good plane, “The Abyss” represents the Chaotic Evil end of the spectrum, and so on. Outside all of that, there are a few other general planar spaces (“demi-planes”) that don’t fit in the model, but that’s kind of the gist of it.

Feel free to take a “box wine and Cheetos” break and contemplate you or your character’s place in the universe for a few minutes. I’ll wait. The book presents each of the planes in consistent fashion. There’s a “stat-block” for each plane that summarizes the bullet points of each plane – gravity, passage of time, alignment, who the major inhabitants are, etc. They then go through subsections:

There is also a subsection for “Demi-Planes and Dimensions” which covers a few places that don’t fit the model. Those write-ups tend to include the stat-block and a few paragraphs describing it, without the other formal categories. I thought the neatest of these was the Akashic Record also known as the “Reading Room” hidden somewhere within the Astral Plane that contains a psychic library of all knowledge, anywhere in the multiverse. The final section is the Bestiary, which is… you guessed it… creatures relevant to the planar settings. (21 to be specific). As you would expect, most of the creatures are mid-to-high level threats – you’re not going to be sending new characters out to the planes – but I was surprised to find three races (Aphorite, Duskwalker, Ganzi) with rules for creating actual characters. Some of the creatures represent the “cannon fodder” species for a particular plane, but there are a few oddballs sprinkled in as well. You have the Sapphire Ooze, a good ooze that wants to help people – it will even allow itself to be worn as armor. There are The Watchers, these giant walking eyestalks that show up to observe the destruction of worlds – they’re invisible in plane… errr… plain sight unless you make a ridiculously high Will save and they aren’t there to attack… just watch. (And if you see one, shit’s about to get real.) And there’s the Wrackworm – all the fun of a traditional CR20 giant worm, but he can also bite dimensional portals into existence. But if you’re really cruel, there’s the Level 30 Leviathan – eye beams, bite that dispels magic, tail slap that can plane shift targets, and if you get eaten, its innards are a maze you have to escape. If you really need something god-like to fight, the Cosmic Whale is willing to be your huckleberry.

I think one “elephant in the room” question one has to ask this close to the Pathfinder Playtest is “how much of this stuff could be ported over to the new system?” You’re going to have some people on the fence because maybe they’re worried about buying books for a system that’s… it’s not going away, but it might be fading into the background a little. I think most of this stuff is written at an abstract enough level that it can be brought to the new system intact. I think the character stuff and the creatures might not survive the transition easily – though Paizo or the community may yet create a conversion path – but the general world-building and infrastructure stuff that comprises most of the book should survive intact. Or… just keep playing original Pathfinder if that’s your thing. There’s probably still some glutton for punishment playing blue-box D&D out there somewhere. Since we’ve predominantly been a Starfinder podcast, this led to an interesting side discussion: could you use this material for Starfinder? And… after thinking about it, I’ll give that a “maybe” as well, though I’m not sure I’d recommend it over the official Starfinder releases. I mean, it’s clearly meant to be a shared universe, the races of the Pact Worlds worship many of the same gods. It’s not hard to imagine that maybe Drift travel is powered under the hood by planar forces, and if that travel goes awry, maybe you could find yourself on a different plane. I’d say the context is there if someone wanted to use it that way. On the other hand, maybe with the Starfinder system being so young, there’s a little danger in creating new lore in your own campaigns that could later be contradicted by a future official release.

So what’s my final analysis? I’ll put it this way: as a personal philosophy, I like my cosmos mysterious an unknowable, and I’m not crazy about reducing the planes to Just Another Place To Visit. But if I was into that sort of gaming, this feels like the right way to present it – it brings some level of order to the chaos, but without the excesses of god-killing, and still leaves the major decisions to the GM sitting at the table. If planar campaigns are your thing, this book feels like a good one to have.