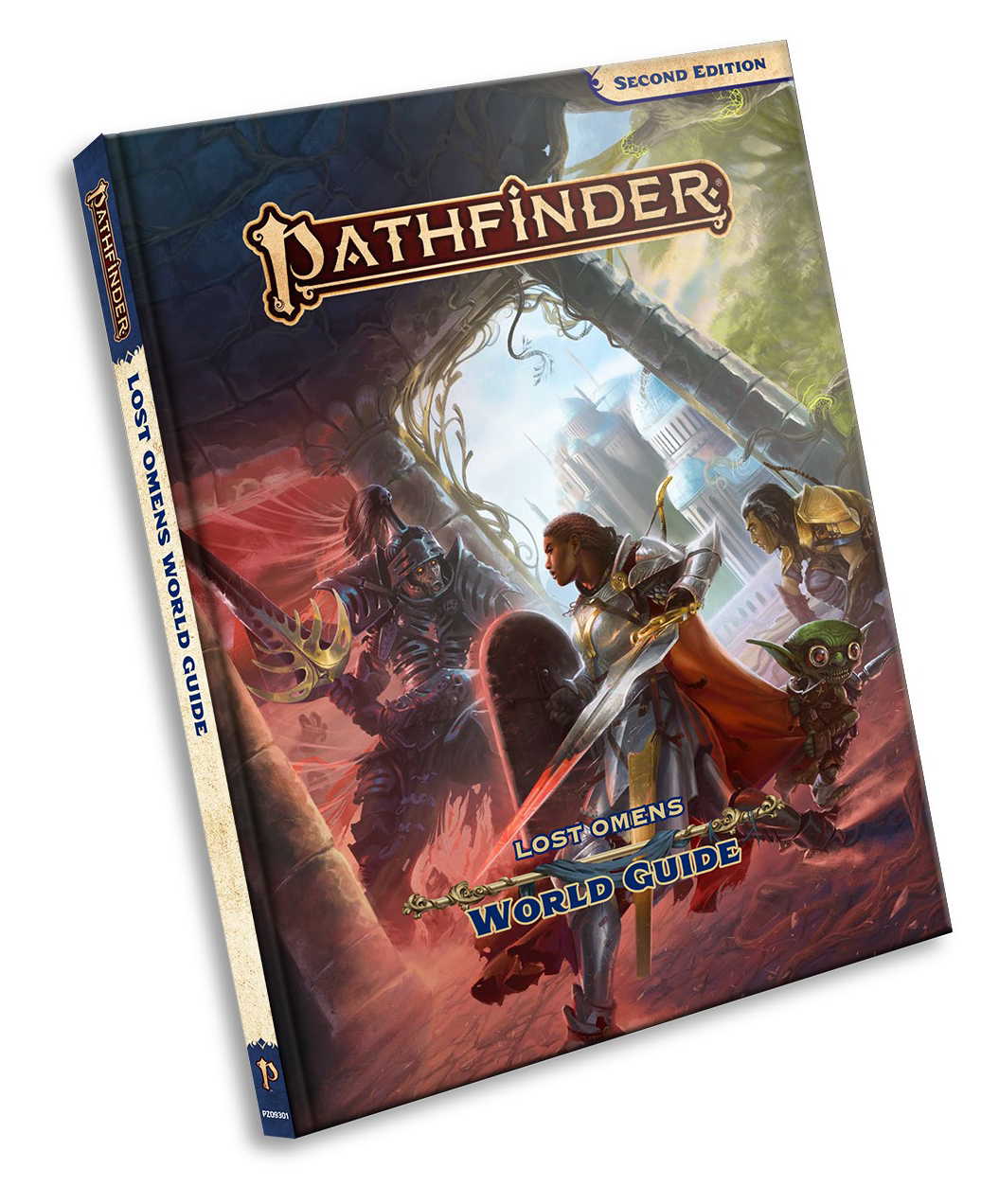 The Lost Omens World Guide is a bit of a late arrival to the Pathfinder Second Edition party. It was originally supposed to launch at GenCon alongside the same time as the Core Rulebook and the Bestiary, but it was unfortunately delayed at the printer. But much like Wonder Woman showing up for the last 10 minutes of Batman v. Superman, it’s finally arrived on the scene to complete the launch-day trinity. (Unlike Batman v. Superman, you’ll be pleased to hear that the word “Martha” is nowhere within its pages.)

So, what IS the Lost Omens World Guide? Well, at its simplest, it’s “the setting book” for Pathfinder Second Edition. It’s a means of introducing the world of Golarion (or at least the portion of it where most of the fun stuff happens) to new players and re-introducing it to players who are making the jump from First Edition. I don’t know how K-12 education is structured these days, but back in 10th grade, I had a class called “World Cultures” that took a 2-3 week survey-level look at many of the main areas other than the United States. How many people live here? What are their religions and languages? What are some of the biggest cities? This book is a lot like that, but for the Inner Sea region. Aside from getting from Point A to Point B and knowing where to buy more rations, it lets you know things like whether elves are commonplace or if you’re going to be regarded as weirdo in the town you’re about to enter. It might also stop you from… ohhh I don’t know… creating an entire party of characters who don’t speak the dominant language of the area you’re visiting. Hypothetically. LIKE THAT WOULD EVER HAPP… (sigh).

Perhaps most importantly, it’s a sourcebook for the ambitious and creative GM, to help them design homebrew content for their gaming tables that would still fit within the Inner Sea setting. Much like the Pact Worlds book from Starfinder, the Lost Omens World Guide is teeming with “jumping-off points” – people, locations, important landmarks, and so on – that an aspiring GM can use as the foundation for telling his or her own stories. If you want to do an undead or horror-themed adventure, the Eye of Dread region is basically the backyard of the Whispering Tyrant, a lich-king who’s caused all manner of trouble over the years. The Impossible Lands are where a battle between two wizards has warped the very land itself, so if you’ve got a mind for weird, trippy, high-magic shenanigans… there you go. There’s an entire chapter dedicated to things afoot on (and under) the high seas.

There is, however, a bit of an elephant in the room. Doesn’t the first edition Inner Sea World Guide already cover a lot of the same ground? And the answer to that is “yes, but…”.

Look. The broad strokes of Golarion remain the same. The city of Absalom still serves as a one-stop hub for adventuring. Most of the “themed” regions still exist; if you want a campaign with a desert flavor or a jungle flavor or an arctic theme, all of those are right where you left them. There are going to be long-time First Edition players who already know most of this, and that’s cool.

So what’s truly new here? That’s the question, isn’t it? First, as a reference manual, it’s organized a little more intuitively than its predecessor. The Inner Sea World Guide was broken down by topic, using straight alphabetical order within each topic. Straightforward in a way, but not necessarily easy to use – two locations that were just down the road from each other on the map could be on opposite sides of the book, and different pieces of information about a place might be scattered across the book. Much like the Starfinder Pact Worlds book, the Lost Omens World Guide takes more of a geographical focus, organizing itself into 10 meta-regions, and tackling each region separately. It’s the difference between having to flip 200 pages to get from Montreal to Toronto rather than them both being in the chapter about Canada. To me, the latter feels more rooted in common sense. Furthermore, the book presents a nice simple one-sheet “flashcard” for each region that includes all the important details an easy-to-digest format. Very handy – something that can very easily be printed off and given to the players at the table.

The next thing is that on a lore level, the Pathfinder world has undergone changes. The fates of different nations have risen and fallen, and some of the formerly dominant powers are less so, with new players taking their places. But here’s the cool thing. It’s not simply “Oceania and Eastasia are enemies now… 30 dollars, please”. The changes that happen as a result of the time-skip are often directly or indirectly tied to the last 10 years of official First Edition adventures – adventure paths, individual adventures, even Society play. Our online game proceeds at somewhat of a slower pace, so we haven’t done all of the adventure paths, but at first glance, I recognized hooks to both the Iron Gods and Carrion Crown adventure paths in the “timeline” running along the sides of the pages. The takeaway is that this isn’t just change-for-change’s-sake; there’s a decent amount of thought put into HOW the world would have changed if one assumed the outcomes of the various adventures as fact. While I admit my knowledge of prior adventure paths isn’t deep enough to totally appreciate it, I think it’s pretty neat, conceptually. Lastly – and here’s where players’ ears will perk up – there are region-specific backgrounds, archetype feats, and sometimes even little extras (items, non-archetype feats, etc.) interspersed within the lore dump. That’s right kids, it’s not ALL fun for the GM; we players get in on the action too.

On one level, the backgrounds are nothing game-changing, it’s still just a couple ability scores and a couple of skill bumps. What they do represent is a means of integrating your character more tightly with the setting and world lore. Just to pick an example, instead of just being a “sailor”, the High Seas section gives you the option to be a storm survivor, an aspiring captain, a member of a press-gang, an undersea enthusiast, or other options… each with their own flavor, and yes… their own stat bumps.

The archetype feats tend to be related to key organizations (formal and informal) within the Inner Sea realms. The most likely (from a player perspective) would be the Pathfinder Agent – if you join the Pathfinder Society (and are from Absalom), you’d gain access to additional feats you can take as you level. On the “formal organization” side, there are several old standbys like the Hellknights and Red Mantis Assassins. For an example of a more informal grouping, there are the Runescarred, residents of the Saga Lands whose exposure to magic over time has left… well… scars. In general terms, there’s one archetype for each region – access to these archetypes generally has a skill requirement and you have to be from the region to take it. The skill needs vary from fairly straightforward (“ability to cast focus spells” for the Magic Warrior of Mwangi Expanse) to fairly specific (the Red Mantis Assassin requires the right alignment, the right weapon proficiency, the right deity, AND membership in the Red Mantis Assassins). So some of these, you may be able to train into fairly easily; others will require a pretty specific build (or a pretty lenient GM) to even get in the vicinity. As far as the “toys”… it’s a little more hit-and-miss here, both in terms of the number of extras and the presentation thereof, but there is some fun stuff here. It’s a little wonky, presentation-wise: sometimes they’re in the flow of the main text, sometimes they’re tucked off in a corner or on the sidebar, so it can be a little difficult going back to find them later. Some sections have three or four; other sections won’t have any. But you do have some fun choices. There’s the Aldori Dueling Sword: the sword itself is nothing special, but training in it and being from that part of the world lets you potentially take the Aldori Duelist archetype and get access to some interesting feats. The High Seas area offers the Jellyfish Lamp, a lamp made of bioluminescent jellyfish, but it loses its potency if it’s removed from water for an extended period of time. I think my personal favorite is the Eye of the Arclords feat – it basically creates a temporary third eye in your forehead that gives darkvision, detect magic, and a bonus to Perception checks. WHO DOESN’T LOVE EXTRA EYES?

So, is this something your gaming group is going to need? At a 30-thousand foot level, it’s a book that’s heavy on lore and light on nuts-and-bolts rules content, and some portion of that lore – fresh coat of paint notwithstanding – is stuff that’s been out there for a while. But it does have new wrinkles to offer in terms of world lore and gameplay that, pass-fail, make it worth a look. I certainly think anyone who’s brand new to Pathfinder with Second Edition probably ought to pick this one up, and GMs who want to do a lot of homebrewing that would still fit in with published material would find this book useful as well. If someone’s a First Edition lifer who already has this committed to memory or if you’re a GM who’s more about the ruleset and don’t really use the Golarion setting as much… maybe it’s OK to wait a bit and see how your Second Edition experience goes before taking the plunge. Having said all of that, it’s a worthy successor to the Inner Sea World Guide and a solid platform to launch a new era of Second Edition gaming.