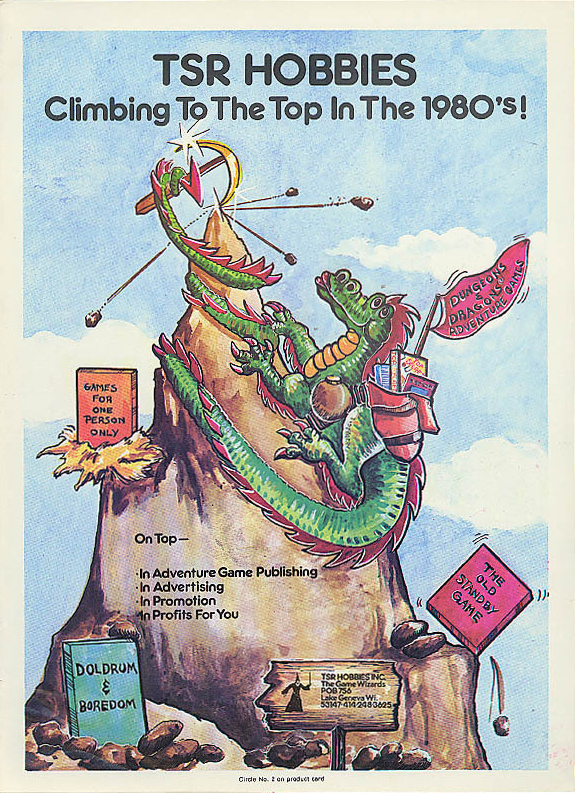 When we explored my Dungeons & Dragons treasures from a few weeks ago there was one item in my 1980 Trapper Keeper that I didn’t show – the 1981 TSR Hobbies Gateway To Adventure catalog! This catalog was released in 1980 by TSR and featured all of their new releases for the upcoming year.

My catalog was in poor shape but I wanted to show it in full as the treasures found in that book contain a dragon’s horde of awesomeness.

Luckily I was able to find a more detailed scan of this same book (in full color), so without further adieu, I present to you the “1981 TSR Hobbies Gateway To Adventure”. Enjoy! Look at that graphic! It’s just begging you to open this catalog and delve into its pages! Today everything is so slick and professional. Back then you really needed to go that extra mile to ignite the imagination … I miss those days. Let this sink in for a second … this 16-page catalog contained the entirety of the world of Dungeons & Dragons and TSR. Everything in the world of RPG at that time could be contained in these few pages. Look how far we have come! Look at all those modules! All … four of them! I original DM screen I still see people using at conventions from time to time. I wish I still had mine. It must be around here somewhere… Here we go, the list of the “Advanced D&D Modules”. Back then there was so little D&D content I think everyone had nearly every module, even if you weren’t a DM. Just having them and reading them was fun … and is still is! You don’t hear nearly as much about the TSR board games, but they were classics in their own right. Dungeon! was THE original dungeon crawl boardgame (it’s right there in the name!) and I probably played this game a good 100 times when I was a kid. I have heard endless stories about how great Divine Right was, however even though I own two mint copies I have yet to play it. One day… In addition to D&D, TRS also published other role-playing games back then. Gamma World was probably the most popular of the bunch as it was basically D&D in a sci-fi setting. I played Top Secret and Boot Hill a few times, but they never managed to have the same hold on me as D&D. I never played Fight in the Skies, nor knew anyone who played it. I would be curious to know it was any good. These are some of the more famous TSR boardgames. Snit’s Revenge! I never managed to find anyone to play with for some reason. The Awful Green Things From Outer Space on the other hand, is still in print today … and perhaps the hardest most random game in history. I love that game, but holy crap that game is hard if you play the crew. I never played 4th Dimension so I can’t speak to that game, but the art was always trippy. The minigames were pretty popular back in the day and they were just that … boardgames that could fit inside a ziplock bag. For a few bucks, you could get an entire game – the rules were a small black & white booklet, the game board was a color piece of paper, a simple color board of unpunched cardboard consisted of the game pieces, and it also included a set of dice. Although I have all of the games listed, I never played them. They were so cheap that it was hard to actually play with the little cardboard pieces and the game board would never stay flat. I guess you get what you pay for. Back in 1980 “random number generation, multi-sided dice” were still fairly rare. TSR had their own version “Dragon Dice” … and they were single-handedly the worst dice ever released. The dice were that terrible baby blue color, you had to color them in with a crayon, and the dice themselves were so brittle they would start to lose their shape after a few uses. What a piece of crap! I loved them!!! Ah, Dragon Magazine. Perhaps my favorite magazine of all time. The covers had some of the best fantasy artwork found anywhere, the content was a treasure trove of D&D and role-playing articles. the cartoons were legendary, even the ads were awesome. When Dragon (and Dungeon) Magazine were canceled years ago I was emotionally crushed for months afterward. I still go through my old magazines to this day, I think everyone loved Dragon Magazine. Holy crap, am I just learning NOW that GENCON had a sister convention GECON EAST in Cherry Hill, New Jersey?!? That was just a few hours from my house! As a kid, there was zero chance I could get to Lake Geneva, but I could have easily gotten to New Jersey! Crap!!! I wonder what I missed? Look at those t-shirts! T-shirts from the 80s did not age well, even back then they looked like crap, but that is all we had so how did we know? Of course, nowadays you can get an exact replicate 80s t-shirt … for a mere $40! Holy crap, those t-shirts were only $6 each? Plus shipping? Damn, get me that Fight in the Skies t-shirt right away!

If you have some D&D treasures from your childhood please send them along! We love unearthing these classic treasures when D&D was mysterious and only shared with friends at school.