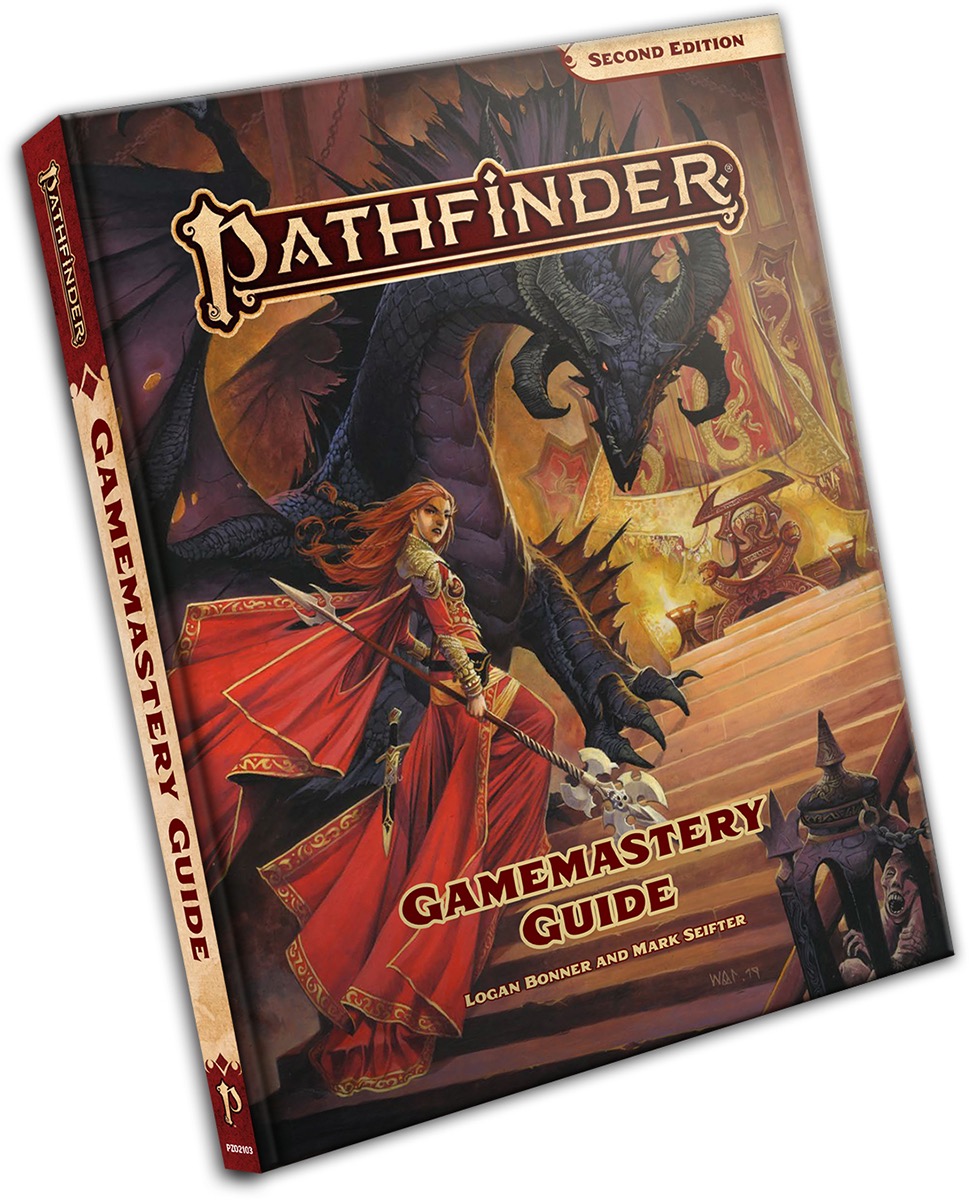 As a kid growing up, there was always a hint of “forbidden knowledge” about the AD&D Dungeon Master’s Guide. There were books for the players, and books for the DM and ne’er the twain shall meet. Or maybe my older brother wanted me to believe that because he didn’t want his potato-head younger sibling to get peanut butter on the pages of his book.

Today, I take a broader view of gaming, and it’s not the worst thing in the world if the players understand how the moving parts work as well as the GM does. And besides, if I get peanut butter on my computer keyboard, that’s my own damn problem. So let’s delve into the not-so-forbidden world of the Pathfinder Gamemastery Guide.

The Gamemastery Guide (which I’m going to be lazy and shorten to “GM Guide” for most of this) is, at its heart, a resource for the GM of your group, and I think the guiding force of the book is taking your game experience to the next level, whatever that level might be. At some level, it’s not that hard to run an adventure path from A to Z off the Core Rulebook. However, at some point, you’re going to run into challenges that aren’t on those printed pages. For the novice GM, it might be how to deal with a problem player, or social encounters that aren’t resonating with your party, or how you can rebound from a TPK without throwing out weeks of gaming and just starting over. For the advanced GM, maybe you want to go off the printed page entirely and create your own additional content. The GM Guide has you covered either way. The first chapter, “Gamemastery Basics”, is your classic “GM 101” stuff, the sort of things Steve talks about in his “GM Tips” section on the show. It’s going to be most interesting to the novice GM who’s maybe GM’ed a couple of times and wants to improve, or intends to triage a specific issue they’re having in their campaign. An experienced GM might get a little bit of terminology refresher out of this section – “that concept you’ve been doing for 20 years… here’s what we call it in this system” – but has probably already seen most of this stuff before in the wild. And there are almost no hard rules contained in this section – the most “meaty” thing I remember seeing at first pass was a sidebar that amounted to “well, whether you treat all diagonals as 5’ or alternate between 5’ and 10’ is up to you”. To be clear, I’m not disrespecting that content or the need to include it. Roleplaying games are having a bit of a cultural moment, and that means new players are going to showing up on our doorstep, and they need that information too. But experienced players can PROBABLY just give this a quick skim and move on to Chapter 2.

Chapter 2, entitled “Tools”, is where GM 101 ends, and the real meat of the book begins. (And at almost 100 pages, it represents the single largest part of the book in terms of page-count). The thrust of this section is “how to roll your own”: creatures, hazards, magic items… even settings and deity pantheons if you want to homebrew your own content that leaves Golarion behind. If you’re a homebrewer, this is “The Good Shit”. And unlike Chapter 1, which floated along at an abstract level, this content is VERY rubber-meets-the-road.

We start with how to design new creatures (RPG Superstar contestants, take note). The level of detail is really solid here. If you’re going to give your creature regeneration, you’ll want to take off X hit points to compensate. If the encounter level is this, the level of the optimal magic item to have it drop is this. It even contains a section on designing your own creature abilities – how much damage they should do, what saves they should have, how to slot them appropriately into the three-action economy, and such. There’s still room for GM discretion and artistic interpretation – but this gives you a real sense of how to build creatures the Paizo Way, so they’ll fit into the existing system, both holistically, and when it comes to making the math work during encounters, so they don’t break your game. In either direction – you don’t want your fancy new critter to be a TPK OR an easy ATM run for your party. Next is a similar section on creating hazards. I have to admit – I knew hazards were more complicated than in First Edition, but I didn’t realize THIS much went into creating them. They’re almost like stationary monsters in their level of detail – you define the mechanism, the sequence of actions, how and if it can be disabled, hit points hardness in case you need to destroy it rather than disabling it, and so on.

The next few sections are near and dear to my heart as a player – rules for creating customized loot. The first section is just a basic ruleset for creating simple magic items of your own device. The meaty stuff comes in when you get to armor and weapons, where you can forego rune slots in exchange for specific abilities to create truly customized gear. We then get into ways you can tweak your basic items to give them flavor – from the mostly cosmetic (quirks: your +1 sword can smell of fresh-cut pine), to things like intelligent items and cursed items.  We finish the section on magic items with relics and artifacts – relics are items that, to oversimplify, level and gain new abilities along with you; artifacts are generally end-game level items with extra abilities, for when you want to create your equivalent of Grabthar’s Hammer. (WHAT A SAVINGS!)

After a few smaller sections that flesh out “artwork and gems” and give the GM a lot more status afflictions to play around with (including addictive drugs), we get into the last “major” theme of the Tools chapter – the sections on worldbuilding. This part actually pulls back out from the concrete to the abstract and takes the shape mostly of questions you should be thinking about if you try to create your own content. It starts at the macro level and works inward, so we go from “let’s say you want to mess around with gravity on your planet; what ramifications does that have?” to “how many local cops should a hamlet of pig-farmers have?”. Though it does use examples from Golarion to illustrate the various concepts, so you do get some “crunch” by example. Moving on, Chapter Three is “Subsystems”. There’s a theme here of fleshing out the non-combat parts of the game by creating mini-games with their own separate victory conditions. So to pick one example, instead of making a single Diplomacy roll to decide whether the Duke will let you use his personal boat to get to the island, you use the Influence subsystem and play through a sequence of interactions with points assigned to each one, and the players succeed if they reach whatever the target point value is. I would classify Influence, Research, Infiltration, and Chases as variations on this basic theme – take something that might otherwise be summarized by one or two rolls and make it its own mini-game.

In the second half of the chapter, there are more niche systems. There’s a leadership subsystem if the players run their own organization and want to play more of a “management” role in running things. There’s a system for conducting one-vs.-one duels. There’s “hexploration”, which amounts to a system for structuring “let’s go off in the woods for a week and fight stuff” play sessions. And there’s even an MMO-like Reputation system, where – to go back to that earlier example — maybe you can’t even get an audience with that Duke unless you’ve reached a point where people know who you are and what you’re about.

If Subsystems was about helping the GM run an otherwise normal game, Chapter 4 (“Variant Rules”) is more character-oriented and focuses more on changing the underlying assumptions of the game. These run the gamut from pretty minor to fairly major paradigm shifts. Want that point-buy system you’re missing from First Edition? We’ve got rules for bringing it forward into Second Edition and making the math work close to the same. Or maybe everyone starts as an unpowered Level 0 beet farmer and does an “origin story” where they feel the call to adventure and decide what kind of character they actually want to be. Tired of the old nine-box alignment? We can go either way with that: we have options to make more gradual spectrums that you can move along as you play, or you can do away with formal alignments entirely and switch everyone to high-level guiding beliefs. There are also instructions for using a “stamina point” system, which anyone who’s played Starfinder will recognize – stamina points come back after each rest, hit points have to be healed. At the crazier end of the pool, there are systems for untying skill proficiency from character level, or for creating FULL two-class characters (as in… all the abilities of both, not a main class with archetype dabbling in Class #2). The last section is the NPC Gallery. It is precisely what it says it is – it’s a selection of common NPCs one might run into in adventure settings. Palace guards, back-alley thieves, apothecaries and such. These can either be used directly and dropped right into your campaign, or you can use them more as an idea factory or starting point for making your own more unique creations. Or maybe you make your own creations entirely and just use these to “check your work”. It’s not as groundbreaking as the rest of the material, but it’s a handy piece of the toolbox to have.

So there you have it… the Gamemastery Guide. If you’re into this hobby at all, it’s going to be an indispensable reference book for your table. There’s a TON of good information for novice GMs to grow their game, and even veterans can probably use a little help grooming their own homebrew content for the new system. If you’re out of the evaluation stage and making any sort of serious commitment to Second Edition, you’re gonna want to pick this one up.