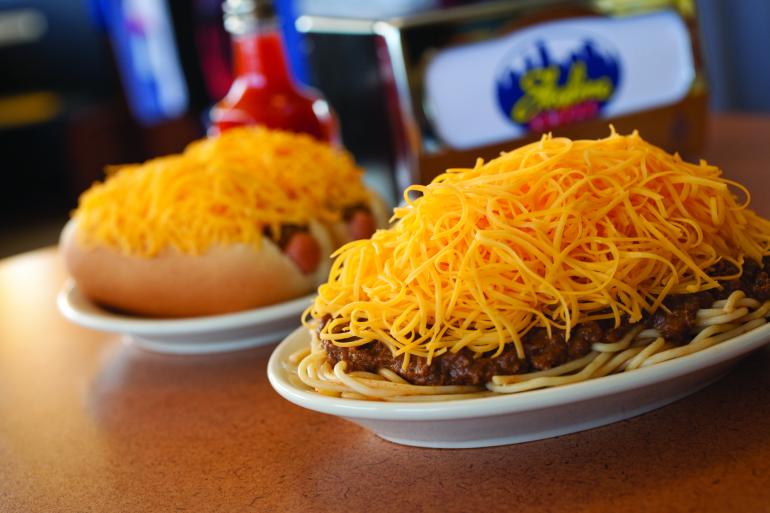 Jason recaps the events from Agents of Edgewatch S2|33: Oh-Oh, Here She Comes.

So OK. One paragraph about the Skinner, 1300 words about Skyline Chili. BUCKLE UP!

Kidding. Though I will mention Skyline has a weird thing where they use cinnamon or nutmeg or something, so even though it’s not sweet, it pushes some of the same olfactory buttons as a dessert food. It’s kinda weird. Then again, it’s also been like 15 years since I tried it, so… take all that with a grain of salt.

OK, already went way too far afield with this. Getting back on track… we’ll start with the show notes. Steve makes an interesting point about having encounters ramp up as a storytelling mechanism and one thing I thought about that he didn’t mention. It dawns on me that it’s also a nice mirror of how players usually handle encounters, primarily because of resource management. Unless it’s the rare “only fight of the day”, you almost never open with your big guns – you usually have a round or two of feeling out the enemy, figuring out what it’s weak to, conserving your big stuff until you’re really sure you need it (and making sure it’s not immune to it, either). So as players, you’re ALSO building to a climax where you keep your big daily powers for when you really need them.

Sorry, I lied to you. I DID get something cool at Level 9. Basil took Soaring Flight as his ancestry feat, which gives me 5 minutes of true flight (not just feather fall), once per day. So basically one combat, or a short non-combat situation. I was just being dramatic so I could spring it at the right time. Call it a taste of the theatrical. (Also, I didn’t tell my groupmates either. I wanted them to be surprised too.)

Now, this wasn’t just Lo Mang-esque cowardice; there was a method to my madness. First, the whole “lollipop” battle map represented kind of the worst of both worlds for my fighting style – the enemies had gotten within 30 feet (the volley distance on my bow) and there was nowhere to back up to re-establish minimum distance. On the other hand, the front line was pretty congested, so getting in there with my sword-cane would’ve been tough. Also, I did have the thought that maybe the Skinner’s ability to use the excorions as healing potions MIGHT have a range limit. So if I could drag one down the hall after me, maybe she couldn’t use it to heal. So… there may have been a little bit of cowardice involved, but it was TACTICAL cowardice.

It’s probably worth reviewing the general rules for flying while we’re talking about it. If you’re climbing, it basically functions as difficult terrain and it takes twice as much movement to cover the same distance. On the other hand, you can descend twice as fast – 10 feet of descent for 5 feet of spent movement. The one thing that we got slightly incorrect is that you don’t have to land at the end of every turn; it’s just that (per the rules) “if you’re airborne at the end of your turn and didn’t use a Fly action this round, you fall”. So that sounds like you just need to use at least one of your three actions to maintain flight – if you were flying and did three attacks, you’d go splat. (Well, Basil doesn’t because he also has his tengu feather fall, but YOU would.) And there is also a hover action, which is just a fly action with a speed of zero.

If I’m being honest, I probably got the descending phase of my move wrong – I think I was supposed to go straight down instead of diagonally – but I would’ve only been off by 5 or 10 feet on the back end, and it wouldn’t have affected my attack on the Skinner at all. At worst, I should have ended my turn not-quite-as-far down the corridor. Not a huge mistake; chalk it up to first-time jitters. (Speaking of which, I was so excited about flying for the first time that I forgot to also use my reaction to try and poison the Skinner with my sword cane. Though… I assume she’s got a crazy fortitude save anyway, so I don’t think I really lost much on that one.)

Of course, the real story of this fight was Lo Mang breaking out the Mother Of All Hero Points to escape the Skinner’s chains. The funny thing is, I had JUST talked myself into the idea that her chain attacks weren’t that bad – I think the most she had hit for prior to that point was 30-some on a crit on Dougie. But that wrap-up ability the Skinner has is just brutal, and if she’d used it on me or Gomez, it would’ve pretty much ended either of our days. But Lo Mang… for all the times we make fun of Chris, he actually came through big on this one, rolling the natural 20 on Hero Point roll. I suppose we didn’t get a ruling on whether he actually broke her weapons or just escaped the grasp, but considering we finished beating her down before she got her next move, I’m not sure it matters that much.

And OK, I want to give Dougie his due as well. Critting off my Shared Stratagem and then having his sword re-apply flat-footed so he could land a SECOND dose of precision damage was kinda badass. TACTICS!

So the Skinner is down and dealt with. We’re not QUITE done with the cultists yet; there’s still a room that houses the lieutenant known as “Mobana the Stitcher” (I assume that was the room the earth mephit investigated when it went down the ladder from the sleeping area) and a few other rooms to be checked. But the big boss is done, and we didn’t really use that many resources doing it. (Heck, Tyrroicese was tougher, if you want to go there.) So, I feel pretty confident that we’ll be able to finish up the Skinsaw Cult on this trip into the catacombs.

Buuuut it won’t be this week, as Steve makes it a short episode. So I guess we’ll come back to it next week. As always, feel free to drop by our Discord channel or other social media and let us know what you think of the show. Thanks for listening and we’ll see you next week.