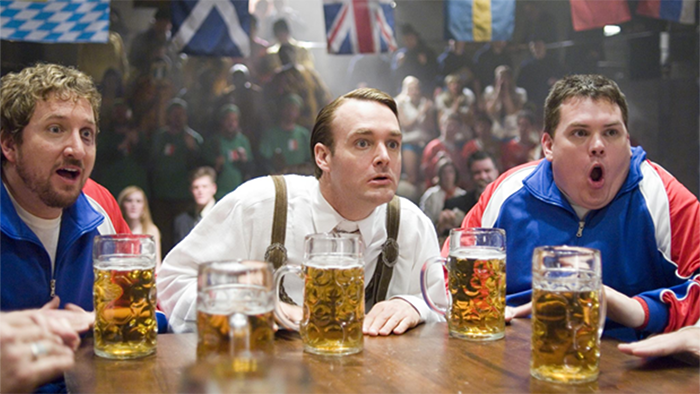 When doing these columns, sometimes there is a Big Overarching Theme that manages to suck up 1000 words all on its own. Other times, it’s more of a grab-bag of loose thoughts… I’d be showing my age to compare it to Larry King, but there you have it. This week’s column is more the latter – lots of little things struck me as kinda-sorta interesting, but nothing really jumped out as urgent business.

First things first: I swear I didn’t give Voltaris a gold piece to suck up to the Paizo Muckety-Muck. Promise. Though that’s not to say it was a move without cynicism… just a different brand of cynicism. I was more worried that if the negotiations bogged down with the harbormaster, our usual brand of paralysis by analysis might kick in and we might spend 20 minutes debating how to NOT pay the harbormaster. You already saw hints of it with John debating whether to steal our money back. So… screw it, I decided to cough up a gold to keep the game moving along. And OK, roleplaying-wise, maybe a little benevolence at hitting Level 2 and feeling sorry for the character on his very first adventure. Now, if Erik Mona happens to remember this kindness at some later date, well, that’s just an added bonus.

So we find the pirate captain without much trouble, and we get our first special surprise of the evening: the return of Old Woody! Yeah, OId Woody is part alcoholic beverage, part potion, part Class 6 and/or 8 hazardous material that’s been part of our game since the pre-podcast days, and usually I am its most willing victim. In its pure form, it has medium-duration (a few days) or even permanent effects, but I assume that probably wouldn’t fly for a Society game, so we’re dealing with some black market knock-off version that just knocks you on your ass a little if you crit-fail… which of course I do. In one of those “I forgot I said it the first time, and actually laughed at my own joke listening to the second time”, I was highly amused at the idea that Nella would briefly turn back into a duck before passing out. “IT’S GOLD, JERRY. GOLD.”

I would observe that if the roll was a little closer, maybe my newfound poison resistance might have made a difference, but when you miss by THAT much… nope. I don’t think it was a Nat 1, but I don’t remember the base die roll being more than a 4.

As far as trying to cheat during the darts game by casting Guidance, I figured that was a calculated risk, but worth a shot. I somehow didn’t envision her trying to kill us or refusing to sign the treaty just because we fooled around on the final shot, and if she had, I would’ve been willing to do the groveling apology to keep the Pathfinders in the good graces. That said, I did get Survival (+8) and Stealth (+0) confused, so I wasn’t NEARLY as sneaky as I thought. So that’s an “oops” on my part. Fortunately, I gauged her (or Steve’s) response correctly, and she was basically cool with it.

But then, just to mess with us, she goes and starts a bar-room brawl… the meat of the scenario… and disappears, leaving us to fend for ourselves in the world’s worst rendition of Margaritaville. Yay!

It’s an interesting fight for multiple reasons, but the main reason is the fairly malleable definition of “non-lethal” combat. I mean, when you’ve got pirates pulling knives in round 1 and using 3d6 Hydraulic Push spells… that’s a pretty creative definition of “non-lethal”. Now, for my personal roleplay, I decide (at least to start the fight) that I’m going to still play it by the rules and formally attack with non-lethal damage, incurring the -2 penalty to hit – it just feels like the right thing to do. But after the second straight time where the -2 costs me a hit… at the risk of spoiling next week’s episode, I think I do eventually say “screw it” and hit for full effect at some point.

I’d also like to say Hydraulic Push may have to be added to my arsenal at some future point – if not for Nella, then at least for the next caster class I create. I have to go back and refresh my memory on how swapping out spells works, but that’s pretty powerful for a Level 1 spell. I WANT! Then again, at Level 3, I get access to second-level spells, and there’s probably something even cooler than Hydraulic Push on that list. But there was a moment where I sat in grim silence staring daggers at the words “Feather Fall” on my character sheet. Not gonna lie.

Looking briefly at the rest of the party, Chris’ problem is one of logistics – the good news is he decided to be brave and Champion-y; the bad news is he ran away from the exit and some of the other pirates filled in his escape route, so he’s going to have a bit of a struggle getting out again. (There’s a theoretical exit on the other side, but it opens on the water, so you probably don’t want a plate-clad dwarf jumping overboard.) Peepers ran the right way; he’s just feeling generally aggrieved at being attacked at all. Meanwhile, Nixnox and Vortaris are conducting their own two-person hide-and-seek competition. They’re both getting involved here and there – Nixnox manages to successfully intimidate one of the “general throng” areas into submission, and Vortaris casts that Agony spell – but the fact that they’re in hiding means it will probably be three of us soaking up most of the hits in the short term.

And then there’s the dynamics of the “battlefield” itself. First, the bar is basically broken into six sections; some of the section boundaries are open and you can move freely between sections, but a few are actually hard walls with specific doorways between the areas. I should also mention that if we’re JUST focused on getting to the exit, the door is in the southeast corner, meaning there are two sections to the furthest north we should be able to avoid entirely unless we specifically need to choose a new escape route or unless fighter reinforcements show up from there. Each section has “general mayhem” going on, except in the section Nixnox pacified. The general mayhem takes the form of a single “attack” if you’re in the area – being hit by a bottle or a stray punch or something – and later in the episode, we get a keg spilled which creates slippery conditions. In some ways, that might end up being more of a challenge than the actual melee, since you either have to five-foot step (aka Step) your way through or risk falling prone if you try to move through at normal speed.

So that’s what we’re facing as we end the first episode. We’re mostly doing OK, though Thorgrim managed to box himself into a bit of a corner, and even with his high armor class, they’re still landing a few hits on him. At some point, we’ll have to decide if we need to switch from everyone for themselves to “rescue the dwarf”. But that’s where we’ll pick it up next week. As always, feel free to drop by Discord or other social media and let us know what you think of the show. Thanks for listening, and we’ll see you next week.