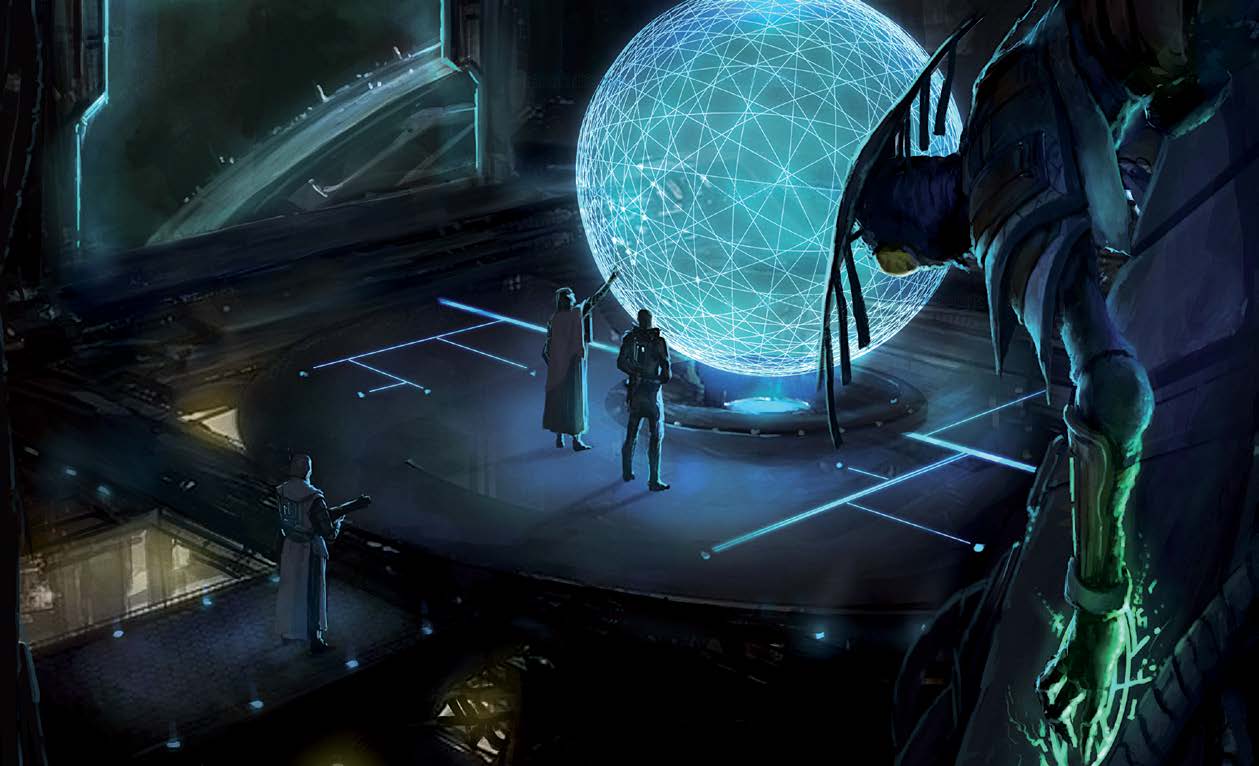 Jason recaps the events from Roll For Combat, Episode 025: Keeping Up with the Combatians.

So it’s milestones galore this week.

First, it’s the end of the first book of the adventure path! That’s pretty exciting. First and foremost, surviving was nice – it actually seemed a little touch-and-go at times. But more importantly, we’ve experienced most of the facets of the game, and our characters are starting to grow out of Newbie-Land and be able to do some interesting things. It’s going to be exciting to see how things start opening up as we have our own ship and can stretch our legs in the universe a little more.

It’s also episode 25… THE SILVER ANNIVERSARY – but I’m not really too wrapped up in that. Yes, it’s kind of neat that we’ve been doing this that long, but from my perspective, it’s mostly just a continuation of years of gaming with these guys. Also, it’s a little hard to process milestones in the moment – since we never know how much of the raw footage is going to make the final podcast, we don’t know we’re in the midst of Episode 25 as we’re recording it or anything.

Heck, until about three days ago, I had been figuring Episode 25 was going to be the space combat. I was initially surprised Steve decided to cut it, but I understand the reasons. It was a really long combat (It pretty much took the entire session the night we played it) and there was a certain sameness to a lot of it. And it probably would’ve been a lot of work to edit it in a way that a) still made game sense to our more technically-minded listeners and b) and still preserved the dramatic flow of the fight.

But selfishly – and I don’t want to spend too much time on something you don’t get to hear, but I wanted to touch on it briefly – the second space battle was a lot more interesting and dynamic for Tuttle. The fact that we had more shields made “balancing the shields” a non-trivial option and a longer battle where we took more damage provided more interesting trade-offs between the Science Officer and Engineer roles. The Hippocampus didn’t really present much in the way of managing resources – wait around until something breaks, then go fix it. The Sunrise Maiden kept me a lot busier. I don’t recall ever having to drop down to gunner because I was out of things to do. It bodes well for future fights.

Getting back to Absalom… and to things that were actually in the episode… our unwitting participation in the reality TV show was a nice touch. (Yeah, I know it’s not “TV”, but it’s a frame of reference we can all agree on.) It’s certainly something that delivers that sci-fi feel and gives us something we couldn’t get in a fantasy environment. (I almost used the word “milieu” there, but it was just soooo pretentious.)

As the player, I don’t mind that it raises our general public profile – it might open some doors for us somewhere along the line, maybe we get leads or discounts on gear or something. Privileges of celebrity, I suppose. Tuttle, the character, is probably mortified to be part of something so low-brow. The great unanswered question is how much of the Drift Rock mission – particularly the attacks by Clara and the other space-ship – was embellished for the benefit of the show. We never did get a satisfying answer on any of that. My gut says Clara was legit, but that the second ship might have been a plant but there’s some creeping doubt there. Did Clara have ulterior motives in not fighting to the death?

We also never really figured out a) what was in Nor’s crate and b) what the ultimate resolution of the dispute was (though Nor hinted he would lean toward our decision). But I think most of those questions got swept off the table by the fact that we got paid and had to go shopping.

First, am I the only one old enough to remember the old Wheel of Fortune when contestants would actually buy their prizes after each round? “I’ll take the dinette set for $340, the his and hers recliners for $790, the English tavern dartboard for $290, and I’ll take the rest as a gift certificate”. The shopping sessions always feel like that. Are Mk 1 Healing Serums the Turtle Wax of the Starfinder universe?

You’ll note that my shopping was fairly quick compared to the rest of the guys. A lot of that revolves around my role in combat – basically, I hover in the rear, give CHDRR orders, and occasionally pew-pew-pew with my gun. Survivability was my key theme, so most of my money (about 4000 of my 5000 credits) was on an Estex Suit II and a personal upgrade to DEX (reflex saves, armor class, better chance to hit). I thought about going INT on the personal upgrade, but I felt like we get another skill bump in a few levels and I can put a point into INT then if I really want to. I had a plan B where I bought a gun upgrade instead of the personal upgrade, but none of the available weapons was a clear improvement for the amount of money they’d cost. Basically, it was half my money to move up from a d4 to a d6 of damage, and MAYBE get a better crit out of it. Final analysis: I’ll revisit weapons in a few more levels when there’s a real jump in damage output to be had.

We end our adventure with another summons to the Starfinder Society… presumably to get a new mission. I’m feeling a little mistrustful around the edges now that they signed us up for this reality show without telling us, but on the bright side, they hooked us up with some paid gigs and they fixed the Sunrise Maiden for free. So I guess we’ll leave our minor qualms at the door and see what the next chapter has in store for us. Let’s just be sure to read any contracts a little more carefully going forward.

Turning to the Jason Keeley interview, I don’t have a lot to add to what’s already there, because I had Pathfinder 2 (Son of Pathfinder) on the brain and it’s probably too early to get the answers to most of the questions I had. (GIVE ME 10TH LEVEL SPELL LISTS, DAMNIT!). It sounds like maybe they’re going to take some of the best pieces of Starfinder and try to graft them back onto Pathfinder, which could end up being really good. Can’t wait for the playtest.

The one thing that stuck in my mind was the process of adventure paths – I guess I was a little surprised to learn how autonomous the individual adventures ended up being. I didn’t necessarily expect it to be a completely serial process, but I assumed there would be more top-down control. It sounds like the marching orders are “here’s where you start, here’s where we need you to end, maybe a few plot points in the middle, see you in a few weeks”.  It’s almost more reminiscent of a writer’s room on a TV series.

I think that approach is a double-edged sword – both the strength and the weakness of that approach is the freedom it gives the writers to create. On the good side, you get a writer’s best work if they’re unleashing their creativity and writing things they’re personally vested in rather than banging out pages where they flesh out other people’s ideas. On the other hand, that can sometimes lead to disjointed content, and sometimes the connective tissue between episodes can feel a little flimsy if the pieces are TOO different. I suppose another good analogy is the Marvel Cinematic Universe – it gives the creators the freedom to come up with Guardians of the Galaxy (silly adventure romp), Ant-Man (heist movie), and Black Panther (socially aware superhero movie) under the same broad umbrella… but it can also give you a shit sandwich like Thor 2.

I’m not going to single out an adventure path that did this badly, but Carrion Crown stands out as one that handled this particularly well. You had the horror theme tying the whole thing together at a high-level, but the individual adventures each got to bite off a different chunk of the horror genre – vampires, werewolves, Cthulhu cultists, even a take on Frankenstein’s monster. Furthermore, they tended to have a deft mix where they would engage with the existing tropes in familiar ways at sometimes, but then break sharply and make it their own in other places  –  a nice combination of familiar and fresh. (And now I sound like a food critic. THE COBB SALAD WAS GREAT, BUT THE LEMON CHICKEN WAS UNDER-SEASONED.)

So next week, hopefully, we get back to adventuring and see where the new chapter leads. In the meantime… Got some Pathfinder 2 speculation? Care to share your own personal favorite adventure paths? Are you in a mood to pick apart our shopping lists? Feel free to drop us a line and let us know.