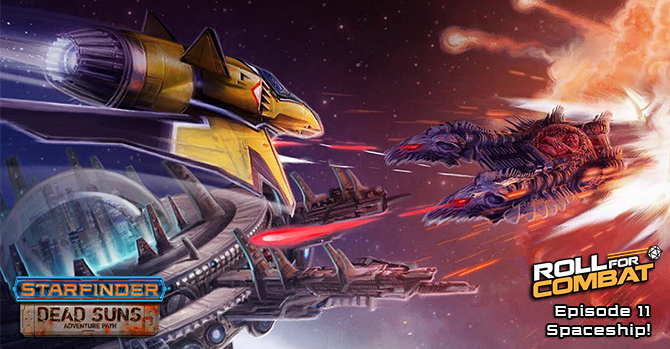 The boys board the Hippocampus and leave the safety of Absalom Station for open space. At first, the biggest danger confronting the team is Rusty’s heavy-handed leadership style might cause a mutiny. But then, actual danger appears in the form of a one-man enemy fighter. Lock phasers on target, charge techno-babble emitters – it’s time to kick the tires on Starfinder’s spaceship combat!

Join the Roll For Combat crew as they stumble their way through life and death with a Starfinder starship combat tutorial. Will they live, die, or will Rusty get thrown out an airlock? Find out this week!

Also this week, GM Stephen discusses how far one should “dumb down” powerful bad guys – should every combat be an epic life and death battle, or can some of them just be a simple shootout?

Plus, this is the week we announce the grand prize winners for the $1000 “Big Podcast Launch Giveaway”! Listen to find out if you won… and even if you didn’t we’ll have a brand new contest starting next week! And don’t forget to become a supporter of the podcast at our Patreon page: https://www.patreon.com/rollforcombat where you can help us while unlocking fun exclusive rewards for yourself!

Did you like this episode? Check out our episode recaps: Talking Combat.