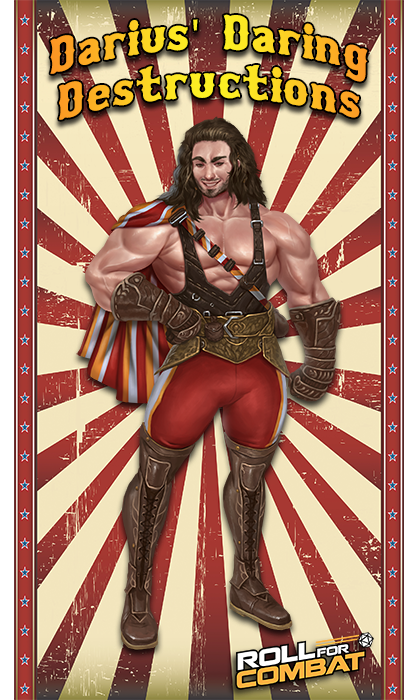 Darius Varus was a strong child and a powerful boy, so his father got him involved in training as early as he could. During his training, he learned multiple styles and fighting techniques from local pit fighters and local gladiators who all did side-stints in the circus for extra coin. His main teacher was a dwarven Monk named Durgann Bloodhammer, who taught him the ways of the Unrelenting Avalanche and honed his body into a powerful force of offense and defense.

But it wasn’t all fighting all the time. Darius was also taught how to heal broken bodies and volunteered his help to the local Hospitallers to hone his craft. Of course, there was no shortage of accidents, falls, equipment failures, and misjudged acrobatics while in the circus, so he had the chance to utilize his medical skills quite often.

In his adult life, he is an extremely friendly person, very protective of his sister, and those he calls friends. He always goes the extra mile to help, even if it means taking on burdens that are not really his to bare. Darius is usually the instigator for revelries and nights of raucous post-performance drinking parties and always tries to be the peacemaker among disputes. Many times, he has turned a dour mood into levity with his wit and positivity, which has often changed the course of a show for the better following a failed act or mishap. He’s a mountain of a man, and a mountain of happiness!

Darius is played by Rob Trimarco.