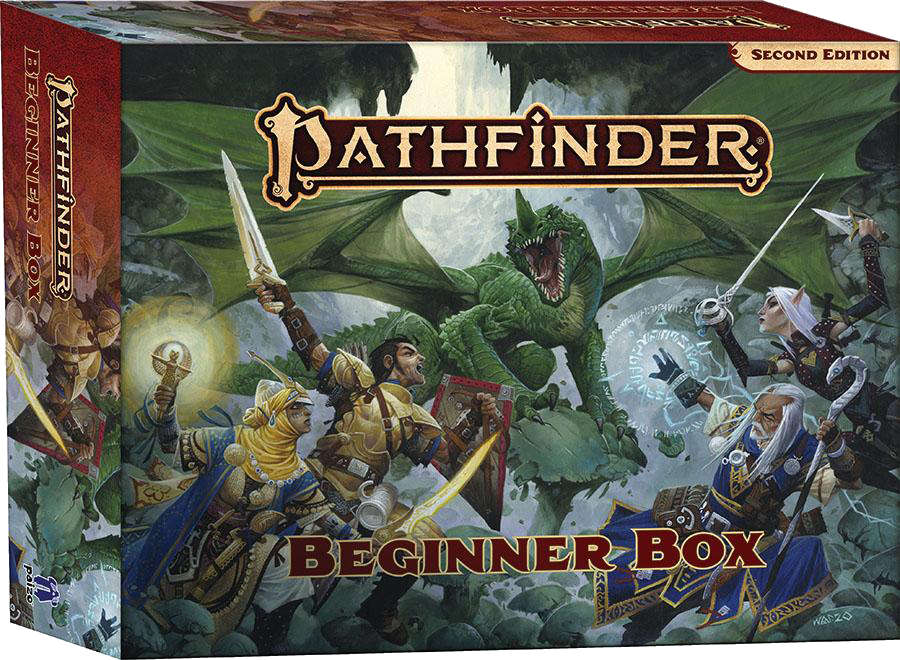 It kinda got lost in the shuffle, but I received a copy of the Pathfinder Beginner Box under my Christmas tree this year. Now, a week of that “shuffle” was it getting physically lost, as my son snuck it off to his room for a week so he could decide whether to play it with his 5E friends; the rest was more metaphorically lost, between getting back to work after the holidays and the near-meltdown of democracy. But now that things have settled down and my possessions have been returned, let’s open this thing up and see what we’ve got.

I don’t think it’s going to be any big surprise what to expect from a Beginner Box at a high level: it’s an introduction to the game that’s not going to break the bank and in single-box packaging that can sit on a shelf in a gaming store next to Ticket To Ride and Settlers Of Catan. (First action, I pick up a brick. Second action, I throw a brick at your sheep. Third action, Perception check to spot the Robber). It’s designed to draw the interest of the person who has never tried a roleplaying game before and goes to their gaming store asking for “a cup of D&D” because that Matt Mercer fellow is a charming rapscallion. So even prior to opening the box, I assume you’d get a truncated version of the rules, a (basic) adventure to run, dice, minis, or creature tokens, and I assume pre-gen characters because you’d want to place an emphasis on getting started QUICKLY. Well… there’s that, plus nothing kills enthusiasm for a new game as quickly as the party dying on the second encounter because everyone wanted to be Gandalf.

Oh, and with just enough hint of what the full system could do, to try and encourage players to graduate to the “real” thing if they liked their first experience.

The characters are EXACTLY what I expected. The Beginner Box goes back to Gygaxian basics, providing Level 1 character sheets for the most fundamental Pathfinder iconics: you get a choice of fighter (Valeros), wizard (Ezren), cleric (Kyra), and rogue (Merisel). Their equipment is already bought, the casters’ spells are picked, and the character sheets have a half-page of annotations to help players navigate the sheet (“Hit points? That’s section E”). To be fair, they do also include six blank character sheets in case you have a player feeling bold enough to roll their own (or if you have more than four players), but the pre-gens let you dive in immediately if you like.

The rules are mostly a subset tailored to running the provided adventure, plus a little extra to hint at the possibilities if one chooses to take it further. When I say that – don’t get me wrong. Nothing is changed or simplified… these are the real Pathfinder Second Edition rules. If there’s slimming down, it comes in the form of narrowing the number of choices to make getting started a little less daunting. These are the real Second EditionSpecifically, the Beginner Box divides this into two slimmed-down rulebooks – the Hero’s Handbook for the players and the Game Master’s Guide for (big surprise here) the GM. They’re both in the 70-90 page range (72 for the players, 88 for the GM).

The player book only covers the four Gygaxian classes (fighter, wizard, cleric, rogue) and only as far as Level 3. So, sorry, but no gnome monks on your maiden voyage. Even within that space, they slimmed down the choices so as not to overwhelm the new player, so you don’t get the WHOLE rulebook – there are fewer ancestries, backgrounds, spells, etc. On the GM side, MOST of the book is geared toward running the adventure – 30 or so pages are running the adventure itself and then there’s an equally large section dedicated to monster stat blocks. I didn’t do a one-for-one, but I assume most of these creatures were used directly in the adventure, but again, there’s probably also a few “extras” for the GM who wants to try and create their own content. There’s also a little bit of content about how to adjudicate the rules and even a few pages about how to design your own content, but I feel like they’re MOSTLY expecting people to graduate to the full rules for that.

The adventure itself (“Menace Under Otari”) is a fairly basic starter adventure: just a generic two-level cave complex full of stuff to fight and treasure to find. Kinda reminiscent of the classic Keep On The Borderlands, but on a smaller scale. And yes, the Beginner Box includes a two-sided flip-mat AND cardboard creature tokens for running it. There is some general setting information about Otari, but it’s largely optional: a GM could just drop players off at the mouth of the cave and be playing inside of five minutes if they wanted. On the other hand, not only is the setting information for Otari there; if you DO continue on to full Pathfinder, there’s a 4th level adventure called “The Troubles In Otari” where you can level up and use your characters from the Beginner’s Box directly in the next adventure. Something that I have to admit I didn’t expect: the Hero’s Handbook has a section that basically amounts to GM-less play for the starter adventure. It gives a solo player the option to run the adventure in the style of a “Choose Your Own Adventure” book. You go to a numbered entry, read the description (which is the text the GM would normally read), possibly fight a monster, and then choose from available options that send you to the next entry in the chain. “Open the chest, go to #32. Put the amulet on the altar, go to #41.” I didn’t have time to do it for the purposes of this review, but at some point, I might try and run through it just to see how it goes.

One thing I found kinda handy – and may steal for our regular game – is a set of reference cards for the players. The front contains information that an experienced player would already know (what the symbols for the various actions look like, rules reminders of the consequences for rolling a 1 or a 20, etc.) but the back contains descriptions for many of the most common statuses, which is pretty evergreen stuff. My only complaint is the text on the back is kinda small because they had to fit a lot of info, but Paizo is not responsible for my Old Man Eyes.

And yes, you get a starter set of dice. Not much to say here, except that they eliminated the d100 (which I’ve noticed rarely gets used in 2E anyway), and they’re mercifully color-coded. As someone who even now occasionally reaches for a d8 instead of a d10 or vice versa, being able to tell your novice player “no, the BLUE one” makes things a lot easier. In fact, a little bird told me this is one of those “why did no one think of this before?” moves, as dice confusion is cited fairly often as a complaint of new players. There was one extra-credit question I asked myself. The default assumption here is that the “beginner” is someone who has never played a roleplaying game before. But I also asked myself whether “beginner” would be useful for people who had played other role-playing games but this was their first exposure to Second Edition. After thinking about it for a few minutes, I think someone who was already into roleplaying games and knew the basics would rather have the full set of rules available to them out of the gate. My feeling is that they’d find playing three levels of four classes limiting and start bumping their head on the ceiling pretty quickly. The Beginner Box is a LITTLE cheaper than a Core Rulebook, but you’d get more longevity out of the latter.

Let’s briefly be gauche and talk price. I normally don’t dwell on this sort of thing, but since the Beginner Box competes in a broader space as a gaming product, I figured I’d mention it. The Beginner Box retails on Paizo’s website for $40. Personally, I think that’s tremendous value when compared to some of these hardcore German board games that are running $100 or more. You’re going to be able to squeeze multiple multi-hour play sessions out of it, and that’s before you get into its value as a gateway to a whole new style of gaming. It’s even pretty good value just evaluated as a Paizo product – you’re getting pieces of the Core Rulebook AND Bestiary 1; and the flipmat, creature tokens, and such are all reusable. It’s really just a question of how quickly you’d bump your head on the ceiling. Which is why I go back to what I said earlier: if you KNOW you’re committing to 2E for the long haul, or if you’re going to play a LOT and burn through the content in a few weeks, skip it and go straight to the full rulebooks. But if you’re dipping your toes or are likely to play at a more casual pace, it’s a pretty good way to start.

In closing, if you’re a longtime fan of tabletop roleplaying games, how could you NOT love the Beginner Box? I mean, if you think back to old-school red box D&D in the 80s, that was basically a beginner’s box before we had the terminology, and it drove people like me into a lifelong appreciation for this game. If the Second Edition Beginner’s Box captures even a fraction of that energy and bring some new faces to the table, it’s a worthy addition to Paizo’s product line.